We have an opportunity right now to press the pause button on misguided US corn ethanol policy.

Ethanol has been touted as the solution to our energy and climate crises. But, turning corn into fuel only compounds global hunger. America cannot build our own energy security on the back of people living in poverty—it is morally indefensible and wrong for our own energy, climate, and national security interests. We have an opportunity right now to press the pause button on misguided US corn ethanol policy by telling the EPA to waive the corn ethanol mandate.

Ethanol is not the answer to our oil dependency. Even if all the corn grown in the US was used for fuel, it would replace only one out of six gallons. Ethanol is also not the answer to our changing climate—which itself is driving food prices higher. Corn sounds all natural, but between massive changes in land use needed to grow corn for fuel and the energy costs to process that corn into ethanol, it is hardly greenhouse gas neutral.

Meanwhile, ethanol is contributing to global hunger. Last year, 40 percent of corn grown in the US went to fuel instead of food. If all the land used to grow biofuels for the EU in 2008 had instead been used to grow food, it could have fed 127 million people for an entire year. Major land grabs are happening all over the world, often propelled by the market’s demand for biofuels, leaving marginalized communities without access to traditional land and water to grow food.

Hunger is a moral issue, an economic issue, a health issue, and a national security issue. There were riots around the world in 2008 when food prices spiked. Right now, Yemen is in the grips of a terrible food crisis—almost half of the population is hungry, including one million children. It is not in our national security interest to have people starving in Yemen or in any fragile state.

The governors of North Carolina and Arkansas have asked the EPA to waive the renewable fuel standards mandate, which requires at least 10 percent of unleaded gasoline be made from ethanol. Waiving the corn ethanol mandate will lead to an estimated 7.4 percent drop in global corn prices, which will in turn lower prices for meat, milk, eggs, and more. For people living in poverty who spend up to 75 percent of their income on food, this small change can make a big impact.

The EPA has opened up a public comment period on the waiver, which ends October 11, and so far, more than 5,000 Oxfam supporters have responded. Send in a comment today and stand up for the one billion people who go to bed hungry every day. 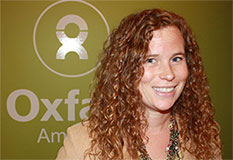 Sarah Kalloch was Oxfam's former Campaign Alliances Advisor, who coordinated Oxfam’s Sisters on the Planet Program and built innovative advocacy partnerships around food, agriculture, and climate change. Prior to joining Oxfam, Sarah served as Director of Organizing and Outreach for Physicians for Human Rights.