In the absence of US federal leadership, other actors are looking to scale-up their efforts to address climate change. One way to do this is by reducing emissions of climate super pollutants, which can reap near-term climate benefits and support pro-poor development.

President Trump’s recent announcement that he will withdraw the United States from the Paris Climate Agreement is not sitting well with most Americans. In response, governments, businesses, and others in the US and around the world have pledged support of the Paris Agreement, vowing to redouble their own efforts to address climate change and pick up the slack in the absence of US federal leadership.

If decision-makers are sincere in looking for ways to push back on Trump’s anti-climate, anti-poor, anti-women agenda, one way to turn words into action is to aggressively reduce climate pollutants such as methane, black carbon, and hydrofluorocarbons (HFCs). These so-called “super pollutants,” also known as short-lived climate pollutants (SLCPs), are incredibly potent global warming agents, even more so than the most prevalent greenhouse gas, carbon dioxide, even though the time they spend in the atmosphere is shorter. Mitigation of super pollutants or SLCPs—while admittedly not the most Twitter-friendly response—could be a real antidote to Trump’s climate poisoning. Here are four reasons why:

1. Tackling super pollutants helps meet the temperature goals of the Paris Agreement. In fact, we won’t be able to limit the global temperature from rising above 2oC without addressing them. Reducing super pollutant emissions can yield direct benefits to the climate within the next few decades (see figure). This may help avoid temperature increases that could lead to catastrophic tipping points, which would be particularly devastating to poor and vulnerable communities. That’s good news for people everywhere, but especially those already bearing the brunt of climate change impacts. 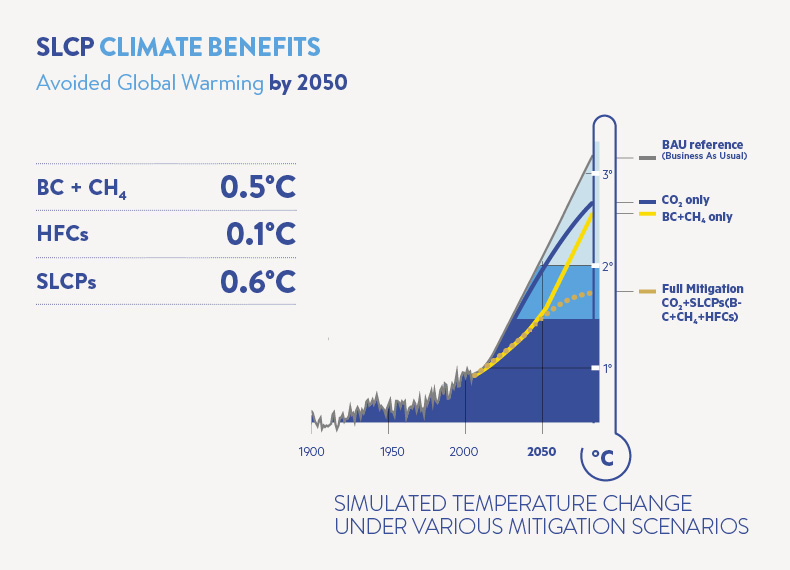 4. Addressing super pollutants improves your status as a climate leader. Political leaders who often find themselves at odds with Trump and his short-sighted agenda would have good company with those taking serious action to address super pollutants. For example, Mexico is the only country to establish emission reduction targets for black carbon as part of their national climate action plan. Within the US, California has adopted arguably some of the most ambitious policies and targets to address super pollutants and codified them into law.

What’s more, solutions to address super pollutants exist across all sectors and are typically inexpensive. But too few policy leaders overall have fully embraced the opportunities that reducing super pollutants provide for both addressing climate change and as part of a sustainable development strategy. To increase the size of the climate army, super pollutants could be used as a focal point for policy planning processes to help facilitate the development of holistic solutions that draw in a diverse set of stakeholders—health, agriculture, energy, and gender equity professionals, just to name a few. Financing institutions—particularly those focused on development—similarly need to change how they treat super pollutant mitigation: not as a second-tier priority, but as a critical component of any pro-poor agenda.

To be clear, addressing super pollutants does not mean we stop pushing as hard and as fast as possible to reduce emissions of carbon dioxide. We need an all-of-the-above approach to addressing climate change, and smart policies that incorporate ambitious super pollutant mitigation can help us get further, faster.