Perfectly smart people fall into the trap of thinking that paying attention to growing economic inequality is just the “politics of envy.” I’ve been annoyed by this. Sure, that could play a role, but there are very important reasons to be concerned and to take the cause of reducing economic inequality as a crusade.

I can think of five reasons we should be worried – very worried – about growing economic inequality. You don’t have to agree with all of them. But, unless you think none of them is valid, then you should be joining the fight.

#1 – Inequality makes it harder to reduce poverty. This is more or less an arithmetic fact. If economic growth helps pull people out of poverty, it’s power to do so is undermined by inequality. To demonstrate this, I jimmied up these charts: 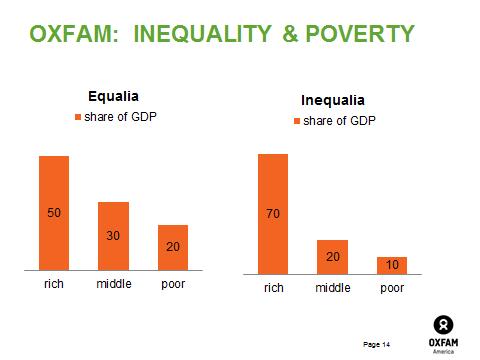 Imagine two countries, Equalia and Inequalia. They have the same GDP, but the distribution in Inequalia favors the rich more. See what happens if both countries grow by 10% next year and that growth is distributed proportionately:

In my made-up example, there would be twice as much poverty reduction in Equalia than Inequalia. The world is more complicated, of course. But, if you care about reducing poverty, you ought to pay attention to inequality. The latter will undermine the former over time.

#2 – Inequality undermines economic growth. It’s not just poor people that rely on economic growth to improve their lives. We all do. So we all are invested in more, better, and more sustainable economic growth. Admittedly, there are critics of conventional definitions of growth and of the negative environmental consequences of growth. But by and large, people agree that growth is good. But, there is new and powerful evidence that high levels of inequality undermine economic growth. The reasons for this are not completely clear. High inequality seems to cause growth to stall out faster than in more equal societies. It may lead poorer people to take unsustainable risks to keep up with social norms (think credit card debt and balloon mortgages), leading to economic problems. In any case, high levels of inequality are bad for economic growth, which is bad for everyone. The most prominent, and surprising, voices making this case recently have come from the IMF.

#3  – Inequality makes people unhappy and is unfair. A body of study shows a range of quality of life factors suffer in societies that are highly unequal. The reduced welfare and quality of life affects not just those at the bottom, but everyone. For example, there’s strong evidence that growing inequality is associated with increased crime. And while we know that crime tends afflict poor people more than rich, we also know that the personal anxiety and social disruption that crime creates affect everyone. Feeling safe at home and in public is an element of social welfare that is undermined by high crime rates, which is exacerbated by high inequality.

High levels of inequality have other, less tangible social and psychological effects. It can create a sense of cynicism about institutions and governments and can offend a sense of fairness. See below for the now-famous graphic showing what actual American wealth inequality is, what Americans think it is (from polling results), and what they think it should be. Inequality is MUCH worse than most people think it is.

#4 – Inequality undermines democracy and good governance. In the USA, where the Supreme Court has defined corporations having free speech rights and defined money as “speech”, it’s pretty obvious that inequality can have a pervasive effect on democracy and governance. If money is be speech, then the super-rich can be heard and have more influence than anyone else. The same dynamic in many different forms is true in other countries.

The needs and desires of the wealthiest segments of society can overpower the competing claims of others. Official bias in favor of the rich can be seen in many policies and governmental practice, from tax policy, to regulation, labor rules, and law enforcement. Government policies may play a role in the creation of extreme wealth, but they are often adjusted to help maintain that wealth, once achieved.

#5 – Inequality squashes human potential. Every person should have a chance to thrive. But huge swaths of humanity are deprived of this this chance. Poverty denies people this chance in many ways. It’s not just the economic deprivation. We know that poor people suffer worse health. Many millions of poor children have their chances stunted at an early age; their brains don’t develop fully due to malnutrition. Many millions more die due to poverty, illness, hunger.

The accidents of birth – what country is a child born in, who are her mother and father – determine economic prospects for most people. This shouldn’t be. The world we dream of is a world in which any person can rise up to their potential through talent and hard work. And by fulfilling their potential can find improved economic circumstances.

The accidents of birth deliver hundreds of millions of children into poverty every year. And more unequal societies offer less opportunity for these children to rise up economically.

For me, this is the biggest tragedy of inequality and the most compelling reason to fight it: that high levels of inequality impairs the ability of individuals to fulfill their human potential and to better their own circumstances.