Riccardo Vitale is an anthropologist based in Cartagena, Colombia and Marc Cohen is a Senior Researcher on Humanitarian Policy at Oxfam America. 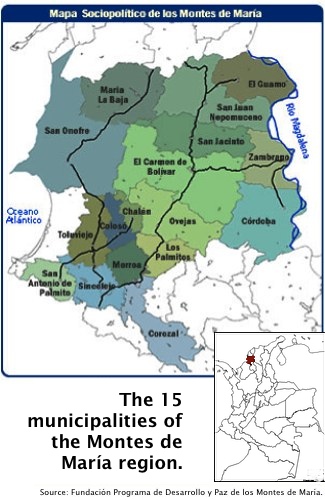 Most of the more than 4 million displaced Colombians are low-income farmers who fled their communities to avoid the fighting. Over the weekend, the Colombian government and the largest armed opposition group, the Revolutionary Armed Forces of Colombia (FARC) agreed to an extensive land redistribution program in their long-running peace talks. In June 2011, President Juan Manuel Santos signed the country’s Victims and Land Restitution Law, which provides land and other resources to resettling people. Donors like the US Agency for International Development (USAID) have supported the law’s implementation.

Earlier Oxfam research in Colombia’s Choco Department (province) found flaws in restitution efforts there. Land recipients had to farm in areas where armed groups continued to operate. And their rights to the land were not really guaranteed, due to lax local enforcement of the Restitution Law.

In Montes de María, a relatively peaceful zone on Colombia’s Caribbean coast that is home mainly to Afro-Colombian people, Oxfam found that even when formerly displaced people have legal land titles in hand, that isn’t enough to make their hold on the land secure. Low-income Colombian farmers typically carry a heavy debt load. A title means that they can use their land as collateral. Too often, they then lose the land when they default on their loans.

Agribusiness firms and speculators then swoop in to acquire the land to raise cattle, grow oil palm and sugar cane for biofuel, or cultivate trees like teak to export the lumber. It’s just the latest land grab, as a community leader from Montes de María told Oxfam:

“In the 1980s the guerrillas took the land from the landowners and distributed it to landless peasants; in the 1990s through the ‘land recuperation movement,’ peasants achieved titles and ownership; then came the paramilitaries, brainchild of rich cattle ranchers allied with the state, that, using terrorist tactics, forcefully evicted thousands of peasants; and at present, via the restitution programs, new businesses and landowners are acquiring legal control of the land.”

Soraya and the other CCMM members told Oxfam that this has especially hurt peasant women in Montes de María. These women traditionally grew rice for their families to eat. But cultivation of the new energy and export crops mostly benefits men, while taking land out of food production.

Land restitution hasn’t just wound up disempowering women and spreading hunger in Montes María. Around the country, it has proved to be risky business. A study by the Latin America Working Group and Lutheran World Relief found that since President Santos took office in 2010, 25 or more land activists have been killed, and many others face threats of violence.

So should we conclude that post-conflict reconstruction programs shouldn’t help formerly displaced Colombians go back to farming? Not at all. But a lot more effort needs to go into designing and implementing restitution programs. The government, with support from donors, needs to undertake thorough livelihoods and conflict assessments before it sets programs up, and it needs to make sure that resources go to and stay with rural poor people, instead of further enriching those who are already well off. And women like those we spoke to at CCMM need to have an equal chance to make a living and own land.

“The land of Montes de María is rich in minerals, water, and is extremely fertile,” CCMM President Soraya de Bayuelo and her colleagues told Oxfam.

“This is both a blessing and a curse, since it converts our region into a battlefield of economic interests.”