Victoria Marzilli is Oxfam America’s new media specialist. This blog was originally published on the Oxfam International’s GROW blog channel. What is the G20? The G20—or group of 20—started as a group of finance ministers and central bank governors from 20 major economies (it’s actually 19 countries, plus the European Union) that gather annually to […] 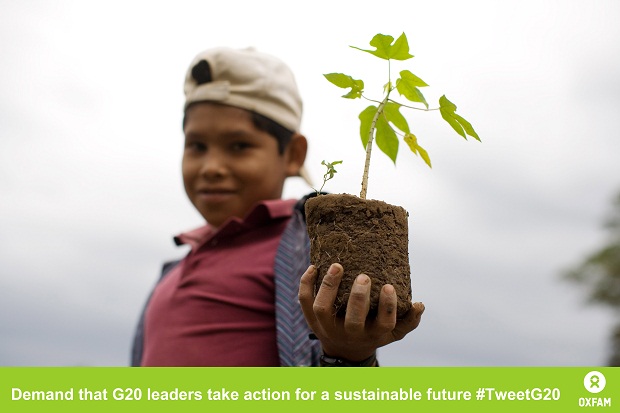 The G20—or group of 20—started as a group of finance ministers and central bank governors from 20 major economies (it’s actually 19 countries, plus the European Union) that gather annually to discuss key issues in the global economy. Since 2008, the G20 has met at the head of state level. Collectively, the G20 economies account for two thirds of the world population and more than 80 percent of the gross world product (GWP). The G20 has declared itself to be the world’s premier forum for economic development, setting high expectations.

Since 2008, there have been important commitments on development made at the G20 Summit, and it’s up to us to hold our leaders accountable. In 2009, the G20 launched a framework for “strong, sustainable and balanced growth.” To pull this off, they said they would clamp down on tax havens, meet their aid commitments, and make sure the world’s poorest people got food, fuel, and finance. But so far, there has been precious little action.

What’s on the agenda?

This year, the G20 Summit is being hosted by the Mexican government in Los Cabos, Mexico on June 18 and 19. As the chair of the summit, they’ve outlined an ambitious agenda to catalyze the discussion:

1. Economic stabilization and structural reforms as foundations for growth and employment;

3. Improving the international financial architecture in an interconnected world;

Overwhelmed already? It’s no question that G20 leaders are facing tough challenges, along with everyone affected by the global economic crisis. But the people hit hardest are those caught in the cycle of hunger and poverty. Right now, one in seven people go to bed hungry every night; that’s nearly one billion people worldwide. And as global markets spiral and our climate becomes more erratic, food prices are along for the ride, preventing millions from escaping poverty.

It’s critical that we take advantage of this opportunity to instill fair and sustainable development practices, and respond swiftly to the crises that affect us now.

What can we do?

While our policy team is working behind the scenes to advocate for G20 policies that work towards ending poverty and hunger, we really need you to help us out. Tweet your message to the G20 with #tweetG20. We’ll bring your tweets to the Summit in Los Cabos! Choose one of our tweets from the list below, or write your own!

Tweet #tweetG20: Tonight, 1 in 7 people will go to bed hungry. #G20 must act now to fix the broken food system.

We can all make a difference. Add your voice today.