The majority of new jobs in the US are low-wage, and the US has a much higher proportion of low-wage jobs than other rich countries.

The Labor Department’s monthly jobs numbers, released earlier this month, suggest an economy on the mend, with unemployment down to 7.7 percent, the lowest level since Barack Obama took office. While the President can rightfully claim that nearly five million private-sector jobs have been created on his watch, what we don’t see in the numbers is that a disturbingly high proportion of these are less than desirable jobs paying less than livable wages.

The good news is that America, unlike many European economies, is creating jobs; and the number of high-skill, higher-wage jobs is going up. However, the bad news is that the majority of new jobs in the US are low-wage, and the US has a much higher proportion of low-wage jobs than other rich countries.

Three of five jobs created between the summer of 2009 and the summer of 2012 pay less than $13.83 per hour, while only one of five jobs created during this period pay more than $21.14 per hour, according to the National Employment Law Project. Indeed, despite much rhetoric about bringing back manufacturing jobs or creating highly skilled, well-paying “jobs of the future” in science and technology fields, the stark reality is that a growing share of the workforce is being consigned to low-wage jobs.

While definitions of low-wage work vary, by most estimates, one-quarter to one-third of the nation’s 143 million workers are in occupations that barely lift them out of poverty. These are the store clerks, health aides, restaurant workers, laborers, and others who earn, on average, about $10 per hour or just $20,000 a year (usually less).

These workers are also much less likely than higher-paid workers to receive benefits or have job security. Only 34 percent of workers in the bottom quarter of the wage distribution receive employer-provided health insurance, and only 29 percent get paid sick leave—compared with 92 percent and 84 percent among those in the top quarter, according to the Labor Department.

And most of these workers need steady and significant incomes: they are neither young nor single. Eighty-eight percent are over 20 and most are over 30; 28 percent are parents of school-age children. In the 16 million families headed by parents who earn less than $11.50 an hour and may have irregular schedules, children certainly feel the effects; they may face hours without parental supervision and support.

The increase in low-wage jobs and the decrease of mid-wage jobs are contributing to the nation’s increasing division between the prosperous and the poor (and near poor). And just as America has become the world’s most economically unequal rich nation, it also has become the country with the highest proportion of low-wage jobs. Whereas one-quarter of US jobs are low-wage, just 11 percent of French jobs and 8 percent of Italian jobs were classified as low wage by the Organisation for Economic Co-operation and Development (OECD).

Despite the cheery talk about how the US can create millions of well-paying jobs if only we invest in education, present trends do not augur well. Without dramatic changes in our economy, many jobs of the future are likely to pay poorly. The Economic Policy Institute estimates that the proportion of low-wage jobs will remain unchanged in 2020. And the Labor Department projects that the two fastest-growing occupations of the 2010s are personal care aides and home health aides, whose median annual wages stand at about $20,000.

While raising the minimum wage would not solve these problems, it could help. The federal minimum wage stands at $7.25 an hour—40 percent below what it was in 1968 in inflation-adjusted terms. If it were raised to the 1968 level, it would jump to $10.55 an hour, and would dramatically benefit nearly 30 million Americans. The Rebuild America Act, introduced this year by Sen. Tom Harkin (D-Ia.), would raise the minimum wage to $9.80 and index it to inflation. While this measure stands little chance of passing, our political debate needs to go beyond mere calls for “creating jobs” to creating jobs that pay livable wages. 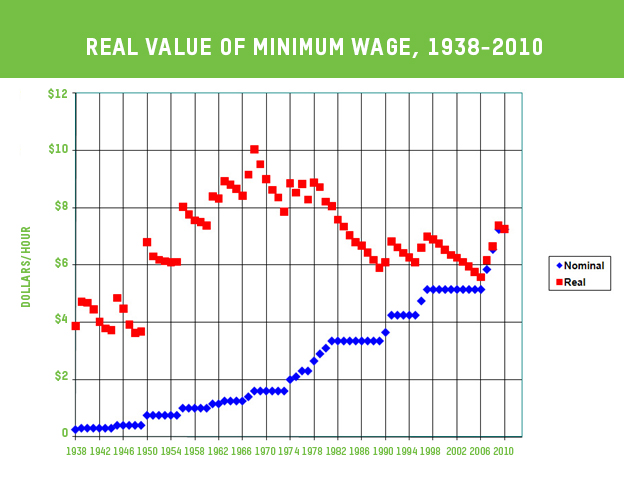