Can “orphan crops” provide better nutrition and better health in the developing world?

I took an hour to listen to a presentation on cereals and nutrition by Curtis Weller, a professor at the University of Nebraska, working as a science fellow at USAID. (Note Curtis Weller’s response to the questions raised in this blog below.)

The lecture is part of an excellent series hosted by Agrilinks, a website and information resource for agriculture and food security hosted by USAID. I recommend noodling around on their website—there’s a ton of interesting stuff there.

I was especially taken with this slide from Professor Weller’s powerpoint: 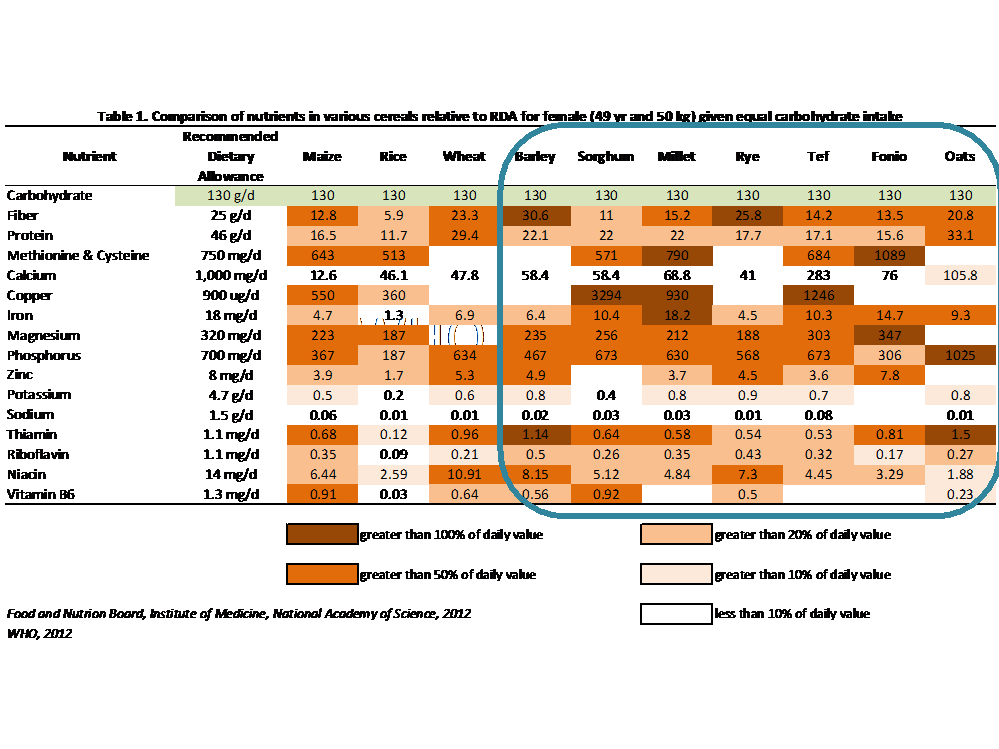 The slide shows that the “big three” global cereals—corn, wheat and rice—rate lower on nutrition compared to alternatives like millet, fonio, or even barley. [Note that other crops, like quinoa and buckwheat aren’t included because they aren’t technically cereals.]

One reason global production and trade of the big three is so much bigger is that the overwhelming majority of investment has been towards these crops; research on new varieties, pest control, productivity improvements, market development, commercial, industrial, and food applications, etc. etc. etc. The neglect of other cereals and staples has inspired some to call them “orphan crops” although that term has fallen out of favor.

Many of these “minor crops” play major roles in local and regional markets and for consumers in specific regions. So, this kind of information raises questions for policy-makers and development programmers about whether to focus efforts away from the big three and toward other crops.  But it’s complex stuff – because the nutritional value of the cereal has to be balanced against other factors. And many questions, like whether it’s even possible to increase production of alternatives; does the technology even exist? Are there disadvantages to shifting production; do the minor cereals create increased require higher labor burdens or more difficult processing and storage? Is there a market for increased production? Etc.

Still answering these are questions is increasingly important as the world faces continued high food prices, continued high levels of malnourishment, and increased interest in agriculture from development donors and the investors alike.

If I have one criticism of Professor Weller’s presentation, it’s that he launched us into these questions, but didn’t offer much insight into how he would answer them. A few questions:

1. It would be useful to know whether it’s actually true that people who eat these alternative grains have better nutrition and better health. That’s implied, but before taking any action, we should know that increasing production and consumption of these grains will actually deliver benefits.

2. It’s easy to see that teff and fonio could be neglected by researchers and traders even if they are superior to other grains, given they are grown in poor countries with limited consumer base. But, not so for barley, rye, and oats. So why have these grains been comparative “losers” despite having nutritional advantages? Is there something intrinsic to them that makes them less competitive or attractive?

3. It doesn’t seem reasonable to do this kind of analysis for nutrition or for agriculture potential—without including other kinds of starchy staples, like quinoa, potatoes and cassava.

4. Large portions of some of these cereals—especially maize and sorghum—are used for animal agriculture globally rather than human consumption. If we’re thinking about investing in these, does that change how we should think about them?