As active citizenship takes root, Ghanaians take to the streets.

Kofi Bosque-Hamilton is a Senior Web Developer at Oxfam America.

What do you do when a colleague asks you about the state of “activism” in your home country?

A few months ago my Oxfam colleague Omar Ortez, who is the Senior Policy Advisor on Active Citizenship, did just that. Other than the recent Oil4Food campaign, I explained to him that historically the issues that motivate Ghanaian activists to come out are usually partisan politics, university student board, and labor union issues, for instance, nurses in Ghana were recently on strike.

The question is: “Why isn’t the regular Ghanaian citizen, who is not active in party politics, or a student, or in a labor union, apt to take to the streets and voice their demands?”

Well, it’s complicated. I suspect that we Ghanaians are “nice.” In other words, the reason Ghana is an oasis of peace in a region that’s festering with political instability (Guinea, Cote d’Ivoire) and terrorism (Nigeria) is the same reason that ordinary Ghanaians do not take to the street when they are frustrated. Retired diplomat and writer Mr. K.B. Asante actually explains this in his column, “Is the Ghanaian character partly to blame?”

Well, on July 1st a bunch of Ghanaians, including myself, decided not to be so nice anymore.

How we got there

Even though many Ghanaians have been suffering for a while, a string of events within the last few weeks pushed the collective consciousness of every Ghanaian to ask “What the %#*& is going on?”

Institute of Chartered Accountants Ghana weighs in on the $3 million saga pic.twitter.com/VNqLGZ2w83

So the Ghanaian government had money for boycotting players and exorbitant rent, but we had no money (or, some say, we refused) to pay our financial obligations? Ghana’s priorities were clearly screwed up, and for many of the protesters – including myself – these final straws broke the camel’s back.

The Plan for July 1st

The plan among Ghanaian citizens was to gather at the Flagstaff House, the official residence and office of the President, and present a petition on July 1st, Ghana’s republic day. That is why this action was called #OccupyFlagstaffHouse for those on social media,.

To note, the Flagstaff house is not without its own controversy. It was originally named by former president Kufour as the “Golden Jubilee House” to commemorate Ghana’s 50th year of freedom, but the current government decided to rename it to the “Flagstaff House,” a colonial relic. (Please don’t ask me why they prefer the colonial name or why Ghana’s lawyers and judges still wear ridiculous colonial white wigs and accompanying attire. It is a sad story for another day.)

What happened on the day

On the day of the protest, I grabbed a tro tro in Accra and found out on the way that the location had changed to Efua Sutherland Children’s Park. I arrived around 7am (it was supposed to start at 6am) and was immediately disappointed by the numbers.

“Is this another situation where Ghanaians are all talk and no action?” I thought to myself. After all, the police that I had seen lined up on the streets on the way here and those in the park numbered more than us, the protestors.

Nonetheless, we talked about the plan for the day, gave everybody the chance to express their frustration, and had a pep rally as we waited for others to join. 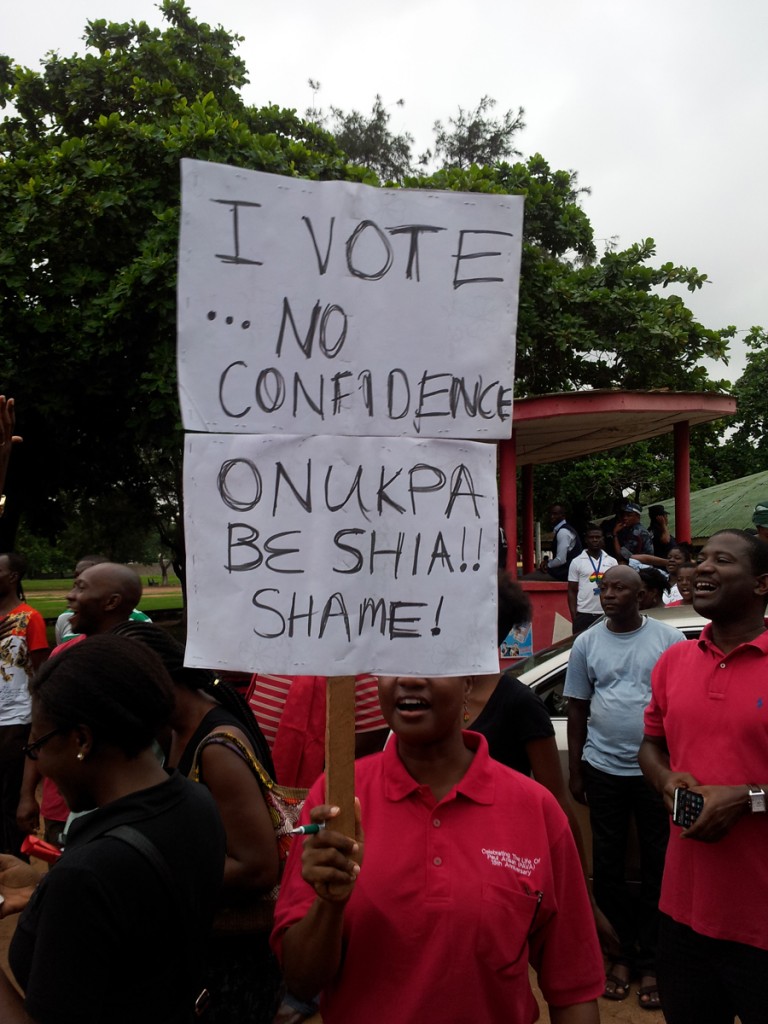 Then we learned that we were now no longer allowed at Flagstaff House. Instead we were to be confined to the park and only three people would be allowed to take the petition to the president’s house. “Are you kidding me?” I thought. We were all ready to march, it was our constitutional right, and were not taking “no” for an answer.

A few minutes later, the organizers announced that an agreement had been reached. We would begin the march at 8:30am to a safe distance from Flagstaff House, and then a few of us would present the petition to the President.

So we headed out. By this time, our little group had ballooned to 200-300 people. But we were still not sure that the police were going to allow us to march. The first clue was when the police blocked the gate and would not allow us out of the park. So this is why they wanted us to meet here – so they could lock us in. Not now, not today. We were ready to march. The crowd pushed and pushed until they let us out. 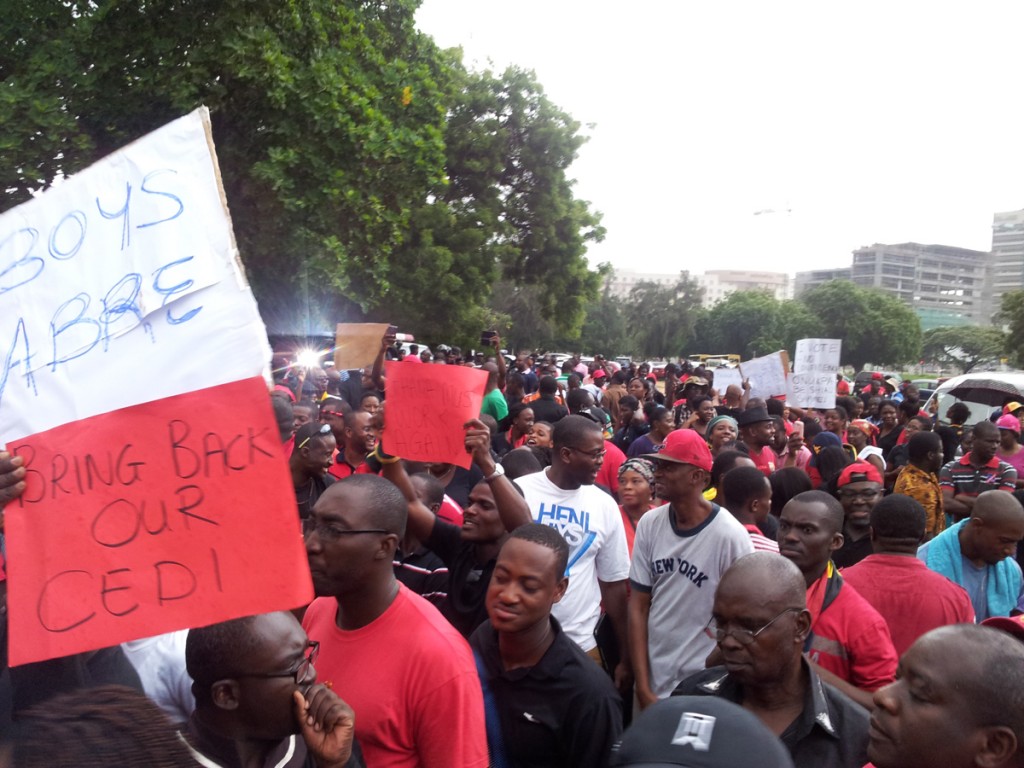 Finally, we were free to march, and march we did. We sang songs and screamed slogans as we made our way to the main street that headed to our destination. 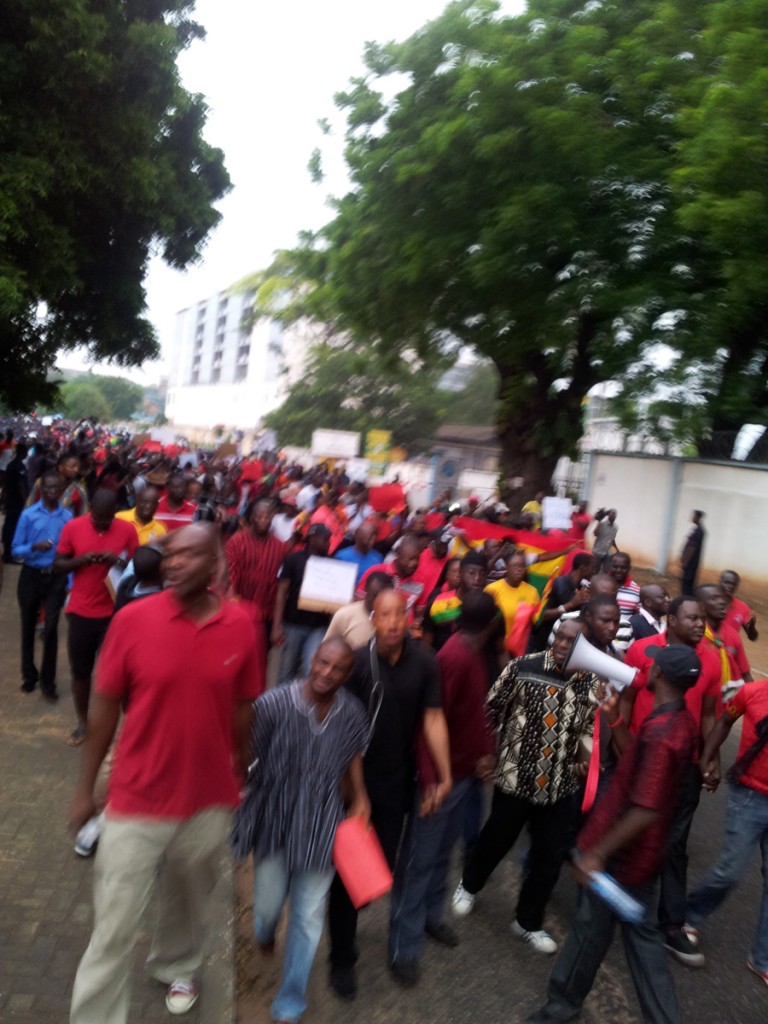 Alas, our marching was only to last about 20 minutes, as the police had other ideas. They had blocked the street with men and crowd control armor trucks. 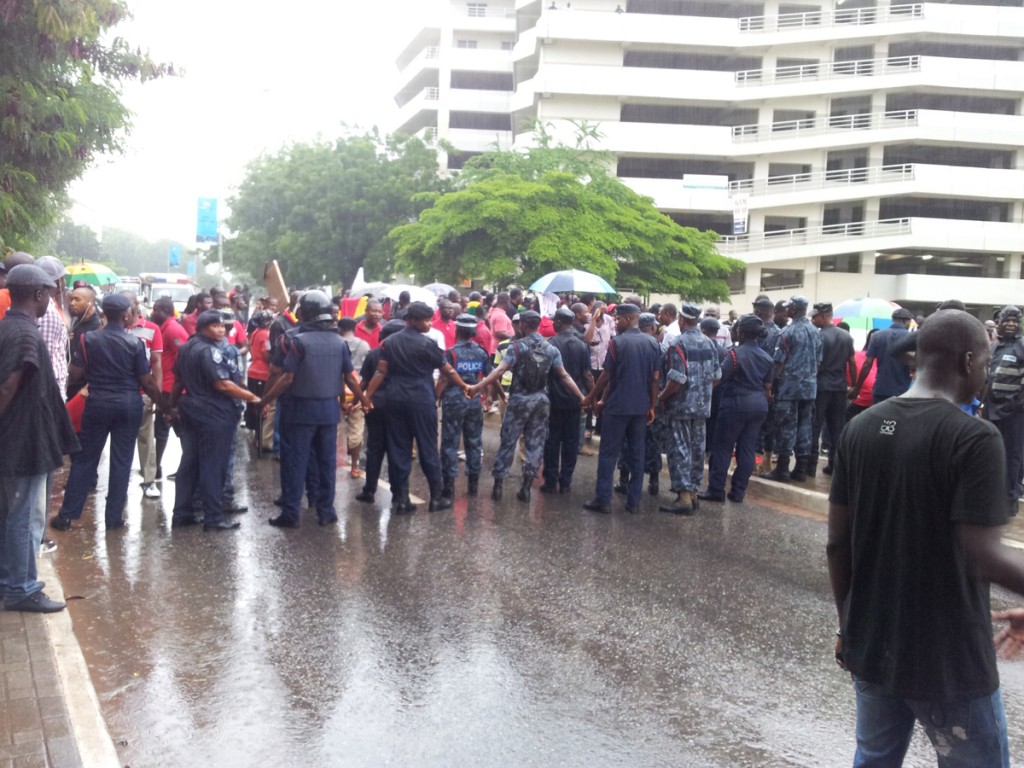 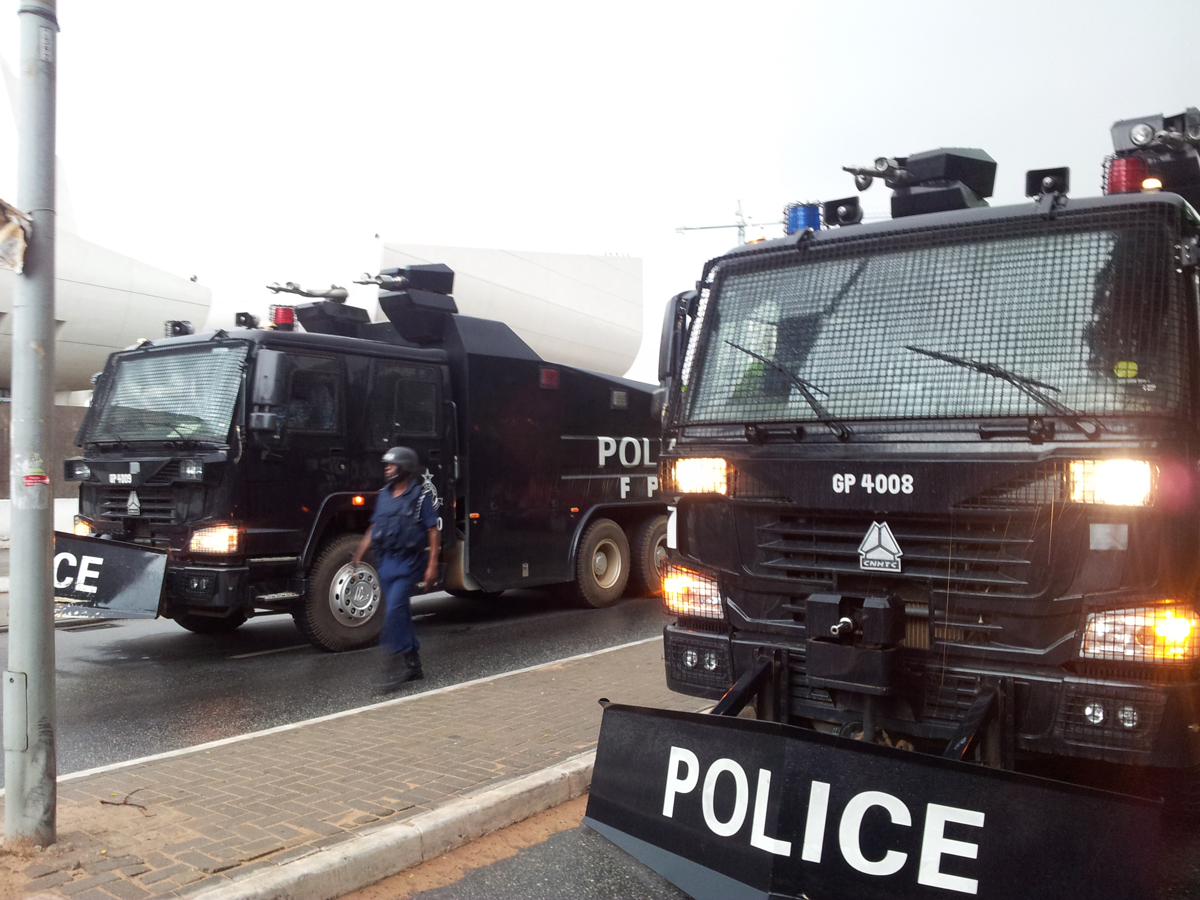 It became clear that the police would not allow us to march anymore on the street, so we quickly changed plans and decided to leave in groups of 10 or so and eventually meet at Afrikiko, a restaurant near the Flagstaff House. So we disbanded, temporarily, and walked through the pouring rain to our next rendezvous.

Unfortunately the police got wind of our plans and met up with the small group group I was in on Flagstaff road. We did not know where the other groups were but we heard another small group had also been stopped a few blocks away.

So we began our protests again on the street – sang, danced, screamed, and yelled our concerns.

The police brought in the big macho guys to move us from the street. We sat and refused to leave, pushing and shoving, and a few of us getting arrested. A few hours later, one of the organizers came over and told us that we had made our point. A few of them had been allowed to take the petition to Flagstaff House.

The protest was officially over but many of us stayed behind to continue talking to the press, drivers and any passersby who was interested in listening. Active citizenship that day meant creating and spreading that collective consciousness, in every way we could.

So what do I think about the state of activism in Ghana since the protest? To the credit of the group that organized “Occupy Flagstaff House,” they have not let up and have already started another campaign called “Red Friday.”

So the future is bright for Ghanaian activism. Of course it will not change overnight, but I do believe the wheels have been set in motion, as long as activist groups continue to take the lead in creating a non-partisan space for people to voice their concerns. Let us keep the momentum and continue to challenge and question the Ghanaian government – no matter which party is in power.

More tweets from the day:

Samuel Atta Mensah of Citi FM: We are used to demonstrations organized by political parties, this is different #joysms #OccupyFlagStaffHouse

"I chose a bad time to start a business, the economy is gone bad this year" – Participant #OccupyFlagStaffHouse pic.twitter.com/g70TPGBxB8

Asamoah Boateng got a booed for coming to join the protest. "No politicians, no politicians" #OccupyFlagStaffHouse pic.twitter.com/Tmlx5wbN08

Middle class Ghanaians in Accra are protesting against the cost of living. Does it mean online activism isn't enough? #OccupyFlagStaffHouse