More than 200,000 consumers last year put top US supermarkets on notice to change their ways. Our updated scorecard reveals which companies are listening—and one healthy foods giant who still isn’t.

Here’s the truth—we didn’t know what to expect when Oxfam launched a campaign last year to spotlight the unjust treatment facing people whose hard work goes into the food on sale at US grocery stores. Would consumers care? Would supermarkets respond?

Questions aside, we did know one thing: human suffering should never be an ingredient in the food we buy. By examining the policies and practices of some of the world’s biggest supermarkets, it became clear that not one company was doing enough to protect their workers or treat women fairly, among other important concerns.

That’s why we asked you to challenge supermarket executives to change their ways and put people first. The response was tremendous—more than 200,000 consumers demanded an end to the human rights abuses taking place across their global supply chains.

So did the supermarkets listen? Some have—but many have not.

How US supermarkets stack up

US supermarkets are making slow progress. According to our updated Behind the Barcodes scorecard, none surpassed 23 percent, highlighting insignificant action on important issues affecting small-scale farmers, women, and workers: Eliminating unfair trading practices, increasing the transparency of their supply chains, paying a living wage, and championing gender equality. (Read more about our scorecard methodology here). 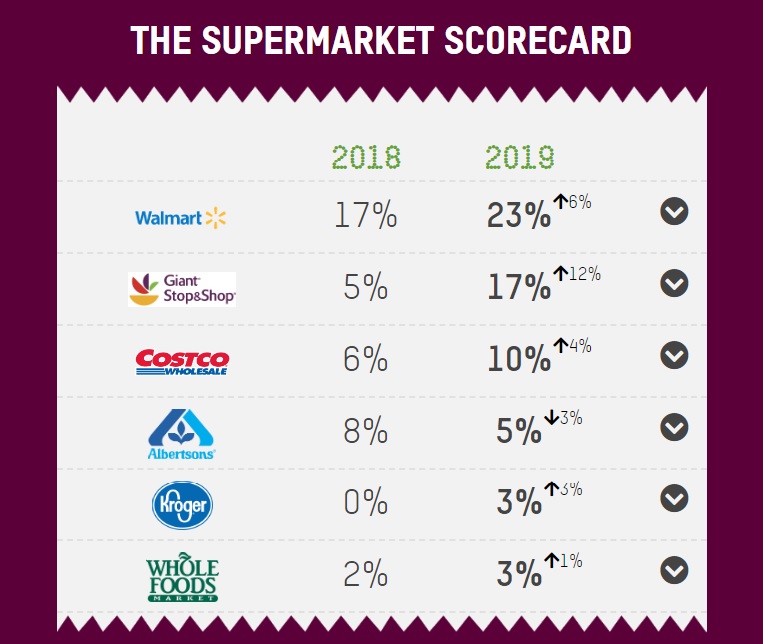 One big surprise: Whole Foods, a company that promotes itself as a sustainable grocer, is tied with Kroger at the very bottom—dropping one spot. It’s all the more remarkable given its customers pushed the company over the past year to stop seafood workers in Thailand and Indonesia from having to work excessive hours in abusive conditions for poverty pay.

While Albertsons and Walmart made some progress in better understanding the risks for human rights violations within their own operations, all supermarkets on our scorecard still lack a robust commitment to protecting human rights. And many lag their European competitors, including Dutch supermarket Albert Heijn that announced earlier this year a new commitment to address human rights in its supply chains.

Farmers and women are still being ignored

Supermarkets on our scorecard performed the worst when we examined their commitments to the treatment of small-scale farmers and women workers.

Although all supermarkets have now committed to stock their shelves with Fair Trade certified products, this approach is hardly a panacea—and companies must do more to help small-scale farmers become resilient and prosperous. This includes making sure farmers in their supply chains have enough income to put food on their tables and support their families.

Another disturbing finding: Women continue to be left behind. Four of the six companies scored 0 percent in this area, which means they fail to address and report on how their supply chains impact the human rights of women, including their rights as workers. While Walmart and Stop & Shop/Giant have made some improvements here, most companies have done little to fix the fact that women farmers and workers face considerable workplace and pay discrimination.

It’s not all bad news

While these US supermarket scores are still extremely low, it’s worth noting that there are some important signs of positive change.

Albertsons, Costco, and Walmart have committed to not “cut and run” if there are human rights abuses among one or more of their suppliers. That means these supermarkets have agreed to lean into identified problems and address them, specifically within their seafood supply chains. Whole Foods and Kroger should follow their lead. On the transparency front, Stop & Shop/Giant and Walmart are showing more progress than others.

As we enter year two of this campaign, this is the moment for companies to demonstrate real leadership. This includes changing unfair policies and practices that drive down incomes and working conditions for producers and workers; giving customers basic information about where their food comes from; making sure workers and producers in their supply chains are paid a living wage or income; and supporting suppliers who want to end discrimination against women—including ensuring women are paid the same as their male counterparts for the same job.

Rest assured that we must keep reminding them, especially those lingering at the bottom, that we are still here and believe they can do better.

Take action today! Share our updated scorecard and let these companies know human suffering should never be an ingredient in the food we buy.