What would you do with $1.5 trillion?

That’s how much oil produced in developing countries is estimated by Oxfam America to be worth to their governments and citizens in the past five years. But 663 million people in these countries (defined as by the UN Development Programme as having a Human Development Index score of less than 0.7) live in extreme poverty.

A trillion is a huge number – bigger than our minds can understand. To give you a sense of what you could buy with $1.5 trillion: 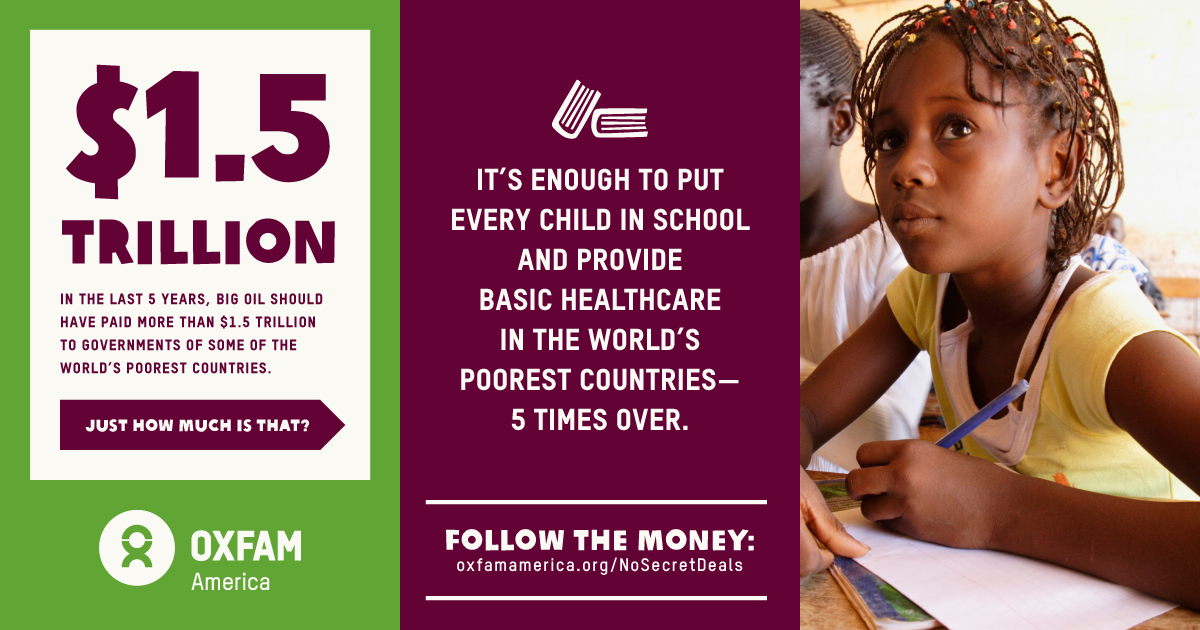 Or you could buy 20,700 corrupt officials their very own Ferrari, private jet, Malibu mansion, and Michael Jackson shrine.  That actually happened in Equatorial Guinea, one of the most corrupt countries in the world. Equatorial Guinea also happens to be rich in oil, and the discovery of reserves in 1995 turned it into one of the fastest-growing economies in the world. In the past five years, we conservatively estimate its oil may have brought in $40.1 billion for the government. And this is in a country with a population the size of Washington, DC. But this wealth has gone to a small circle of elites while the country remains one of the poorest in the world.

The son of Equatorial Guinea’s president, Teodoro Obiang, is accused of stealing $300 million through corruption and money-laundering of the country’s oil and gas wealth. Obiang owned a $30 million mansion in Malibu, a Ferrari, a $3.2 million collection of Michael Jackson memorabilia (including a crystal-covered glove and a “Thriller” jacket) and a $38.5 million Gulfstream jet. 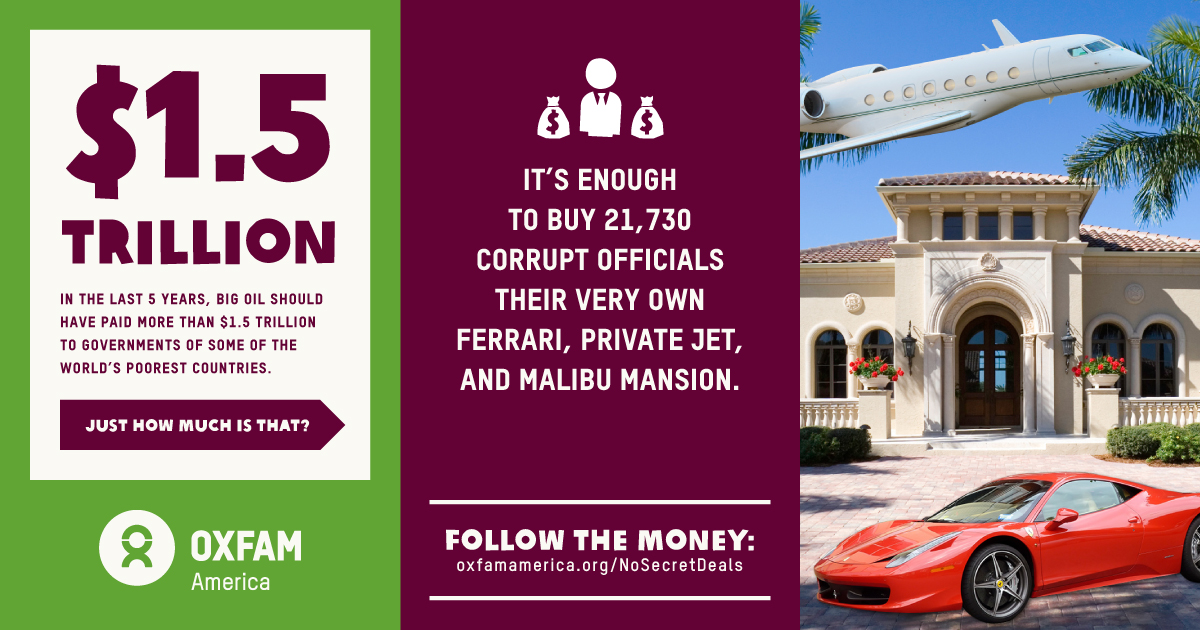 This corruption is widespread in resource-rich countries like Equatorial Guinea and Angola. Vast amounts of money change hands, but most of the population remains poor. When it’s not taken by corrupt officials or just mismanaged, it can even be used to fund violence. That’s what happened in Angola, where the government used oil money to fund a 27-year civil war where 500,000 people died.

Nigeria is Africa’s biggest oil producer, but nearly one-third of its population lives in poverty.  “When oil, gas and mining projects generate billions of dollars in revenue in secrecy, they end up fueling corruption,” said Faith Nwadishi, National Coordinator for Publish What You Pay Nigeria.

When experts examined the problem of natural resource fuelled corruption, they found a powerful way to fight it: Corruption thrives in secrecy, so fight it with transparency. Shine a light on these payments and you give people the ammunition they need to catch the corrupt, pressure their government, and get a fair deal. Activists started pressuring countries like the US and UK to require their companies to publish all of the payments they make to governments abroad. Since big oil companies like ExxonMobil, BP, Chevron, and Shell are all active in countries like Angola, Nigeria, and Equatorial Guinea, we had a stake in stopping this problem.

“US companies run the oil and gas sector in Nigeria,” journalist Obas Esiedesa said in an Oxfam interview. “Our laws are outdated so a law in the US will make them mindful of what they do here.”

This idea gave birth to a movement – Publish What You Pay. That’s why the US Congress included an oil transparency requirement in the 2010 Dodd-Frank Act. The Section 1504 rule would require these companies to publish what they pay. It was a huge victory for transparency and this week marks five years since it passed.

The law has already had a global impact: similar laws have since passed in the EU, Canada and Norway. Unfortunately, the victory is incomplete and the payments are still a secret. Big oil – including ExxonMobil, Chevron, Shell, and BP – have been fighting to keep these payments secret, and they sued to block the law. Two years after they got it sent back to regulators for a rewrite, nothing has happened. Since then, they’ve spent hundreds of millions of dollars on lobbying on 1504 as well as other issues, and more on public relations and corporate social responsibility projects in some of these same countries. But there’s money already going to these countries – an estimated $1.5 trillion or more – that dwarfs a company building a single road or school. Those projects may be important, but the single biggest thing these companies could do to help fight poverty and corruption, they’re instead fighting and trying to weaken.

Oxfam found that $1.5 trillion is what may have gone to the poorest countries for their oil. Now we’re calling on the government agency tasked with finishing this law – the Securities and Exchange Commission – to put an end to this secrecy. It’s also time for US oil companies to stop fighting this law and catch up with their peers who have already started publishing what they pay.

You can help push for transparency and fight corruption. Visit www.oxfamamerica.org/NoSecretDeals to learn about the issue and sign a petition calling for the transparency rule to be finished!