An interrogation of Kenya’s energy options suggests that the answer is: Not yet.

Last month, General Electric (GE) sparked controversy within the energy community by announcing its decision to support the development of a 1.050 gigawatt (1,050 MW) coal plant in Kenya. In response, climate advocates have been quick to call out the hypocrisy of GE, a vocal supporter of the Paris agreement, advocating for the construction of coal plants that emit large amounts of CO2. Both the government of Kenya and GE have posited that developing countries need the energy, and if the investments are going to be made, the most affordable and environmentally friendly option is GE’s ultra-supercritical (i.e. efficient) coal technology, which will limit CO2 emissions compared to conventional coal plants. Climate advocates have countered that Kenya has a wealth of geothermal capacity that is both cleaner and cheaper than coal, and therefore, Kenya, and the climate, would be better off without this investment.

So who is right?

Answering this question requires evaluating the specifics of Kenya’s energy system. This means looking at the different energy resources in the country: their total capacity, their cost to produce, their availability over time (when it is sunny and when it is windy for solar and wind), the costs for transporting them, and then checking that they can meet Kenya’s demand, which varies over time. Evaluating this requires complex models. Thankfully, this research has already been done, and, as I will argue below, the results suggests that GE has it wrong.  It is not clear that coal is the cheapest technology, and it is certainly too soon to be investing in coal. At the moment the smart investment is geothermal.

The research informing this position comes from Prof. Daniel Kammen[1] and his team at the University of California, Berkeley (whom Oxfam has recently worked with) who developed a model (known as the SWITCH model) to tackle precisely this question: what is the cheapest mix of technologies available to meet the Kenya’s future demand, given the country’s energy resources[2]?

So what then, does this model say about the question of coal in Kenya?

The SWITCH model begins its analysis with the development of a baseline scenario (called the Business As Usual scenario in the paper). This scenario found that the cheapest energy pathway for Kenya includes no role for coal. Kenya, being located in the African Rift Valley, has access to substantial amounts of geothermal energy, which can provide baseload power, and therefore, the need for coal – which is commonly used for baseload power – is very low. The rest of the energy mix in this scenario is comprised of hydropower, natural gas, oil, and wind. So again, no role for coal. 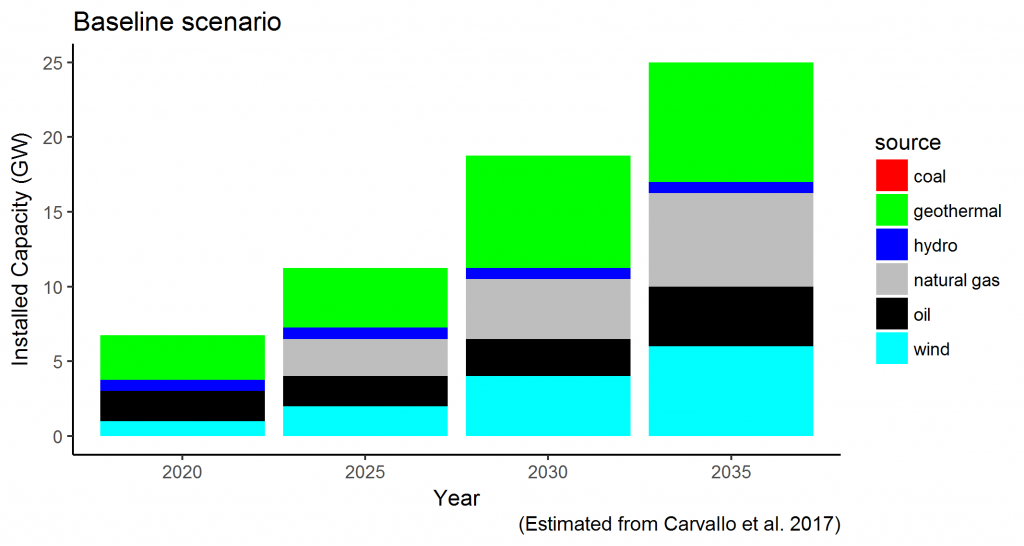 One needs to be careful when interpreting the baseline scenario. As the authors of the model point out the baseline is not intended to represent the most likely pathway for Kenya’s energy development. Rather, since Kenya’s energy sector is relatively undeveloped there are lots of unknowns about the exact capacity of the different energy sources. The baseline represents one set of assumptions about these unknowns. One of the things the SWITCH model allows us to do is change these assumptions and examine their impact, by comparing the results with the baseline. Importantly, when you change some of the assumptions used in the baseline scenario, coal comes to play a role as the cheapest generation source in Kenya. It is by exploring these assumptions that we can evaluate the case for building coal.

When does coal play a role?

Of the fourteen different scenarios run in the SWITCH model, three indicate that there will be a role for coal as the least cost technology. Two of these scenarios pertain to realizing geothermal potential; specifically regarding how much geothermal potential actually exists, and how efficiently it is exploited. The last scenario in which coal plays a role is if coal ends up being cheaper than is assumed, in the baseline scenario.

Looking at the first two scenarios, around reduced geothermal capacity. The SWITCH model runs one scenario in which the available geothermal capacity of Kenya is half what is assumed in the baseline. This results in the most substantial amount of coal being included in the energy mix, with the model adding 3.5 gigawatts of coal to the energy mix (i.e. more than 3 times as much coals as is planned from the GE plant). The other geothermal-related scenario that results in a role for coal is where the capacity of geothermal plants is less than is assumed in the baseline case[3]. This scenario essentially accounts for poor maintenance of the geothermal plants, which would cause them to produce energy less efficiently than the baseline scenario assumes. Under this scenario, one gigawatt of coal (i.e. the same as the planned GE plant) ends up being included in the least-cost generation mix. 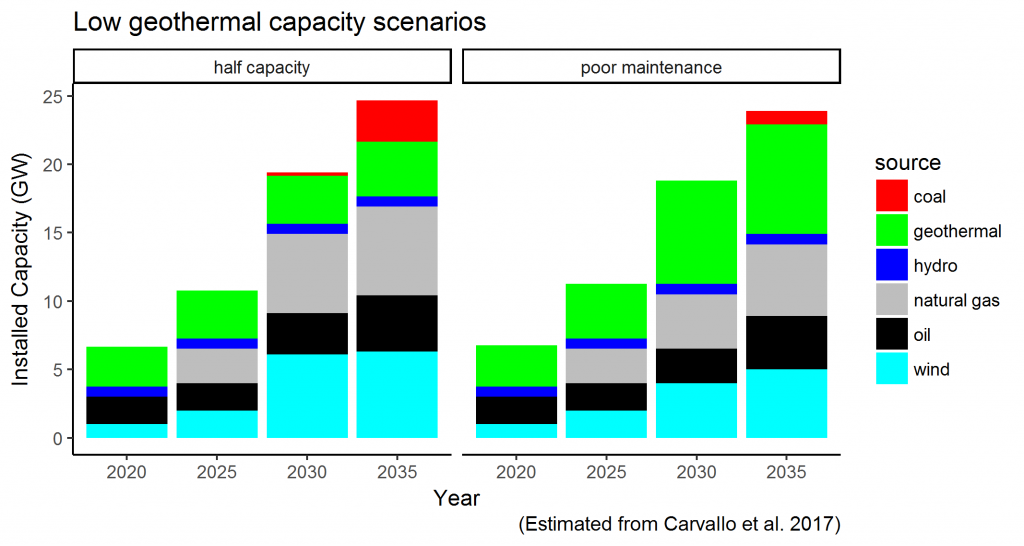 How likely are these geothermal scenarios?

The SWITCH model tests a scenario in which the capital cost of coal is reduced by 30 percent. When they do this, the model again indicates that 1 GW of coal is included in the cheapest energy mix (again this is about the same amount of coal as is planned by the proposed GE plant). 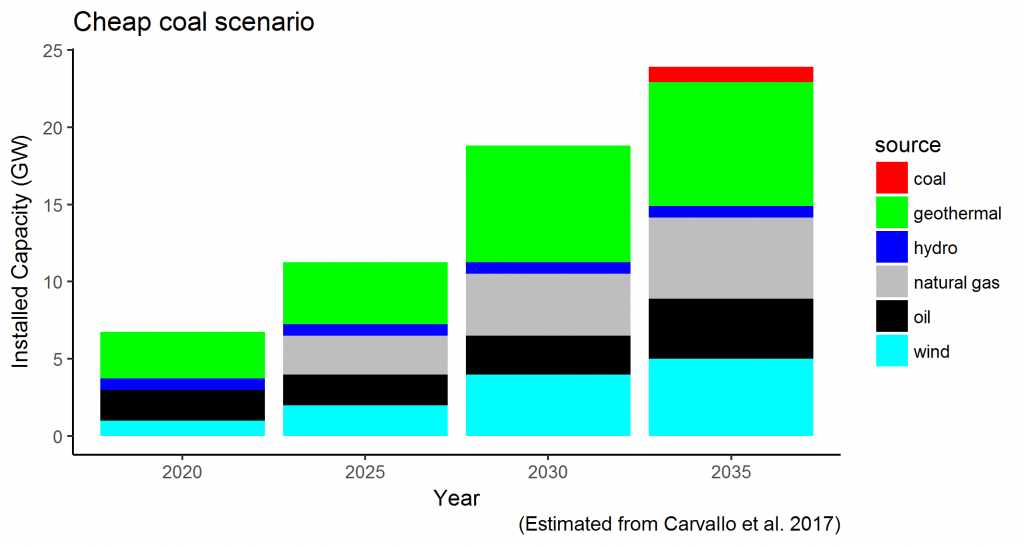 How likely is this cheap coal scenario?

The question about the cost of building coal plants is probably the most controversial output of the SWITCH model. This is because SWITCH baseline scenario uses a cost for coal which is more expensive than estimates produced by the Government of Kenya’s Least Cost Power Development Plan (LCPDP). Specifically, coal is estimated to be about 30 percent cheaper in the LCPDP, than it is in baseline scenario of the SWITCH model.

So how do the authors of the SWITCH model justify their more expensive coal estimates? First, they point out that the LCPDP cost is lower than any other international benchmark for coal costs. Further, the LCPDP number does not include the costs of port expansion, as well as the railway construction and transmission infrastructure that would be necessary to supply the plant with coal and transmit the energy to the existing grid. Finally, they point out that since Kenya has no experience building coal plants, it is unlikely that they would produce it more cheaply than standard industry estimates.

What does this all mean?

Overall then it seems that there might be a role for coal, depending on where exactly Kenya ends up in terms of geothermal capacity, and, if they find a cheap way to build a coal plant. What is most notable from the SWITCH model, however, is that across all the scenarios, the earliest coal comes online is in 2030.

The obvious conclusion from all this is that while there might be a role for coal as the cheapest source of energy in Kenya, there is time to wait and see. The immediate policy, therefore, should be to build geothermal, and see where capacity ends up in the future. If capacity turns out to be less than anticipated, for example, then Kenya can build-out coal.

This approach has multiple advantages. First it creates the possibility that breakthroughs in energy technologies, such as cheaper storage or improved coal technology, will come online before any coal needs to be built. Second, it potentially avoids coal’s negative externalities, which, despite being substantial, are not included in the SWITCH model. Notably, it is the impacts of these externalities that are central to community resistance that is currently simmering around the coal plant, and which, with the recent arrest of two community leaders, appears to suggest that the stakes around the project are increasing.

In conclusion, GE’s position in favor of coal development – based on the economic merits – seems wrong. Kenya might need coal to support its development in the future, but at this time, based on the current models, we don’t yet know whether that will be the case. It may well turn out that coal is a more expensive option – even disregarding its damaging health and climate impacts. Therefore, it is clear that the most responsible, and economical, choice is for GE and Kenya to invest in geothermal, and wait to see on coal.

[1] Daniel Kammen is the Distinguished Professor of Energy at the University of California, Berkeley