More of us are working, but more of us are feeling locked out of economic security and prosperity. What’s happening? Sadly, employers are eating away at the quality of our jobs, reducing workers to little more than line items that get in the way of profits.

We all seem so anxious. Just because we’re seeing some signs of economic bounce (lower poverty levels! higher employment numbers!) doesn’t mean the gray cloud of doom has lifted from the psyche of the American worker. We’re all worried about our jobs.

Somehow, it all feels tenuous. And we’re not wrong. Some of this has to do with the fact that it’s just harder to get by in this economy. Cost of living is up, income is stagnant. While the economic recovery generated jobs, it also sent most of the rewards way up to the folks at the top.

As Lester Holt put it in the opening of the presidential debate on Monday night, “There are two economic realities in America today. There’s been a record six straight years of job growth and new census numbers show incomes have increased at a record rate after years of stagnation. However, income inequality remains significant. And nearly half of Americans living paycheck to paycheck.”

So then the debate went on to stir up a lot of words about JOBS.

But it’s not really about the simple fact of jobs: we have indeed created millions of jobs since the recession. It’s about the nature of these jobs. It’s about good jobs, instead of bad jobs. It’s about jobs that give us a sense of security, opportunity, worth and ultimately dignity.

A job can be crummy in many ways. Paltry wages, no vacation time, dangers to health and well-being. And more and more, workers are finding it necessary to take a bad job– sometimes after having held a good job for decades.

So what makes a job “good”? 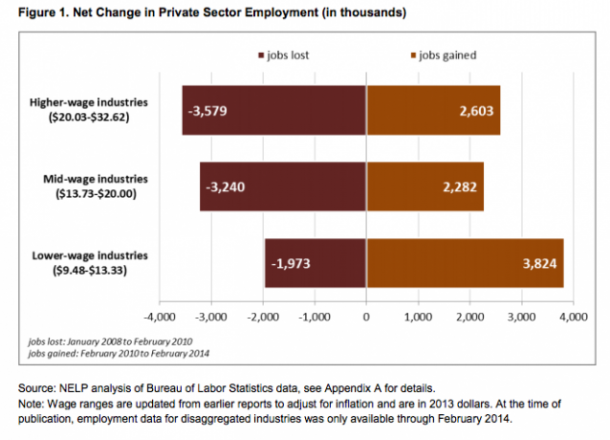 A good job pays a living wage. Workers should be paid enough to survive, and to sustain a family. Sadly, too many of the jobs created since the recession are in low-wage sectors, often replacing higher-paying jobs. For example, food and home healthcare services saw disproportionate growth – but the jobs pay low wages. Today, 58.3 million workers in the US (43.7 percent) earn under $15 an hour; 41.7 million (31.3 percent) earn under $12 an hour.

There will always be jobs that pay low wages, but they don’t have to condemn workers to poverty. Wages should rise as productivity and prosperity increase. But low wages have been stuck; declining in value, as prices have gone up. This is largely due to the federal minimum wage being stalled at a poverty level: it’s been $7.25 an hour since 2009 (about $15,000 a year for a full-time worker).  Not surprisingly, while Congress refuses to raise the wage, increasing numbers of employers are choosing to pay significantly higher wages, even for workers entering the market.

A good job offers benefits that support family life. In other words, time off. Sick time to accommodate for illness of the worker or people in the family. Family leave to allow a parent to spend time with newborns. Personal time to meet with teachers or care for aging parents. Vacation time because.  While this seems fundamental, it’s increasingly rare. And those who suffer the most are those who can least afford it. Over 80 percent of low-wage workers in the private sector lack even a single day of sick time. This leaves them gingerly walking a tightrope over a vertiginous drop, often holding hands with young children and aging parents, praying that no one will catch a cold, break a bone, or get a stomach bug.

A good job is predictable, regular, and provides opportunity for full time work. Many workers are compelled to be on call every week, waiting to hear when they should report to work. In an economy that increasingly runs all hours of day and night, many workers are being called in at the last minute for weekends, late nights, early mornings. One study estimates that 17 percent of the workforce endures unstable work schedules (irregular and on-call shifts, rotating shifts). Without full time work, many workers can see their paychecks vary wildly from week to week at the whims of their managers.

A good job is a job. One of the most unhealthy trends in the economy is the explosive growth in the contingent workforce; the last time the government measured (in 2006!), it accounted for 30 percent of the workforce. The US Department of Labor notes: “The use of independent contractors and part-time, temporary, seasonal, and leased workers has expanded tremendously in recent years,” and calls it a “cause for concern.” What employers gain in flexibility, workers lose in job security, wages, benefits, and recourses if they’re injured on the job.

A good job does not endanger your health and well-being. Again, there will always be jobs that pose hazards: there will be police and farmworkers, sailors and slaughterhouse workers. But you should be certain there are as many safeguards in place as possible; AND that your employer will take care of you if you get injured or disabled on the job. But some industries treat their workers as disposable parts of the larger machine, and discard the parts when they’re damaged.

A good job gives you a voice at work. Many employers may never tap into the expertise and body of knowledge of their workers, but they should honor the need to let them speak out about problems and solutions. Workers should not be afraid to stand up for their rights. This includes the rights of workers to form a union and to bargain collectively. Still, most employers continue to fight efforts by their employees to have a voice in the workplace.

A good job rewards hard work, and offers some promise of mobility and opportunity. You shouldn’t be reduced to a cog in the machine, providing your body and your labor, with no hope of getting ahead. You should be able to invest in training and secure something better.

A good job doesn’t pin you into a corner based on your gender, or race, or sexual identity. In other words, you enjoy status as a full human being, and get opportunities accordingly. Also, you will be paid a wage that reflects the full value of your work – not unfairly discounted by certain prejudices.

All work has dignity and worth. All workers should have that, too. Most of us spend most of our time at work – even if it’s not a great job, it should be a good job.