Even without the bottom decile, they own half of global wealth.

Ricardo Fuentes-Nieva and I shocked the world last year with our calculation that the richest 85 people held the same amount of wealth as the poorest half of humanity. We also determined, using Credit Suisse’s data, that the richest one percent owned more than 45 percent of all global wealth.

Last Monday, our colleague Deborah Hardoon released updated figures, finding that things have become worse over the past year:

The number of billionaires owning the same wealth as the bottom half of the planet is now about 80, and the top one percent owns even more of the world’s total wealth today, nearly half.

While this has received a lot of attention in the media around the world, it seems that not everyone is buying our claim about global wealth inequality. Some critics, including Felix Salmon and Ezra Klein, suggest the stat is misleading because of how we define wealth.

This is a serious charge that we are eager to refute.

Critics say that because the Credit Suisse database uses net-wealth (assets minus debts), our claims are invalidated. This is because a few million Americans and Europeans have more debt than assets, placing them within the poorest decile of the global population, as they have “negative wealth.” Salmon and Klein point to the graph below from Credit Suisse to make their case. 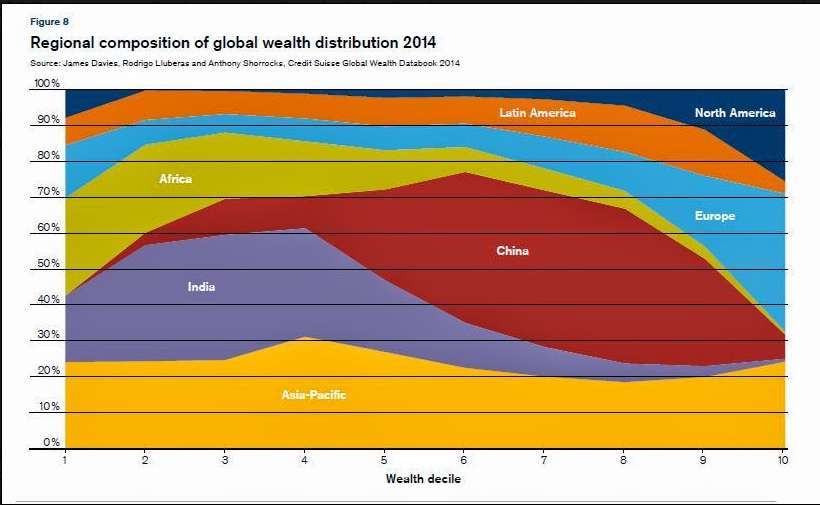 Their observation about who makes up the bottom decile is mostly correct. The bottom decile does, in fact, include about 158 million Americans and Europeans privileged enough to have access to credit, and who are currently in debt. But they only represent 23 percent of those comprising the decile. The other 77 percent of the decile represents about 540 million of the poorest people in the world, most of whom live in Asia, Africa, Latin America, and India.

Even if you accept the critique of  how Credit Suisse describes the poorest wealth decile, the numbers hold up anyway.

Let’s remove the poorest decile and see whether this affects our estimate of global wealth inequality.

Low and behold if we remove all those indebted Americans and Europeans, nothing really changes to our calculation. Here’s why: The 2.8 billion people making up deciles 2-5 (the poorest half of the world) collectively own a mere one percent of global wealth, about $2.6 trillion. That’s about the same amount of wealth owned by the richest 147 billionaires in the world. So, as my colleague Ricardo suggests, two busloads of billionaires own the same amount of wealth as forty percent of the world’s population.

The numbers hold up because they were developed by some of the world’s leading economists, including Jim Davies and Tony Shorrocks, who developed the Credit Suisse database and first published their seminal results in a leading, peer reviewed economics journal in 2010. Davis and Shorrocks have subsequently used this approach for Credit Suisse’s annual global wealth report, where it is universally regarded as a sound approach to estimating who owns how much of global wealth, a difficult task indeed.

With the exception of a few critics, the response to our study has been incredible this past week! The global attention and support we’ve received tells us that we’re honing in on a great injustice that many people around the world find outrageous.

We live in a world where wealth is extremely concentrated into few hands. As we laid out in last year’s paper, extreme wealth is dangerous for democracy, inclusive societies, and the chances for poor children to ascend the economic ladder as they become adults. When wealth is highly concentrated, it’s easy for elites to skew political outcomes in their favor. Too often, this means laws and regulations work to make the richest few richer, and that governments ignore the poor and vulnerable.

Salmon and Klein get this part of it. And, it’s fair to dig deeper into the stats to test whether the story we present holds up. But Salmon and Klein didn’t dig quite deep enough.

As the Financial Times pointed out when they ran the numbers this weekend, and came to a similar conclusion: ”The precise figure for the share of wealth of the global elite, and judgement calls between different measurement conventions, may not be too important . The figure is a good piece of rhetoric designed to draw attention to something that many of those at Davos already agree on but can’t decide what to do about; access to wealth across the world is intolerably unequal.”

You can quibble about the minutia but that may just distract you from the real point.