In 1960 Edward R. Murrow, a North Carolina-born journalist, presented on television Harvest of Shame.  Harvest of Shame was a ground-breaking documentary for its time and took an in depth look at the social, health and labor issues faced by American migrant agriculture workers on the eastern seaboard.  Unfortunately, little has changed in the fields […]

In 1960 Edward R. Murrow, a North Carolina-born journalist, presented on television Harvest of Shame.  Harvest of Shame was a ground-breaking documentary for its time and took an in depth look at the social, health and labor issues faced by American migrant agriculture workers on the eastern seaboard.  Unfortunately, little has changed in the fields of American farms for the migrant worker.  I’ve written about their plight before and the egregious conditions that many farmworkers face in terms of housing, wages, forced labor and pesticide exposure.

Now a new original documentary, Harvest of Dignity, which was created in 2011 by Minnow Media in collaboration with Student Action with Farmworkers (SAF) and the Farmworker Advocacy Network (FAN), focuses on the lives and work of Latinos in North Carolina, providing an in-depth portrait of the people who harvest our food today. It combines interviews with North Carolina farmworkers, health care providers, faith leaders, and educators with documentary photos collected by young people involved with SAF. It also includes clips from the original Harvest of Shame documentary. The film was commissioned by SAF and funded by the North Carolina Arts Council, the Z. Smith Reynolds Foundation and Oxfam America. “Harvest of Dignity” makes its debut on public television (UNC-TV) on August 16th. 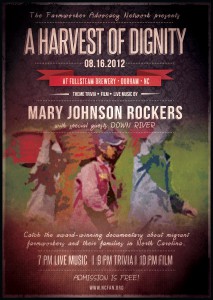 SAF and FAN have been long-time partners of Oxfam America’s US Regional Office.  Working with students, SAF has supported farmworker campaigns across the country including the Farm Labor Organizing Committee’s campaign again Reynolds American Inc. on behalf of tobacco workers. FAN has advocated for improving the laws affecting agriculture workers in North Carolina.

Groups are encouraged to host film screenings of Harvest Dignity and can also ask their local public television station to air the documentary.  FAN developed a study guide that includes facts about farmworkers and child labor, discussion questions for groups, ideas for taking action and a resource list of groups working on farmworker issues.

While more than 50 years have passed since Harvest of Shamefirst aired, farmworker conditions have remained stagnant.  In North Carolina there are an estimated 150,000 workers, but this number is deemed low since most workers are undocumented migrants coming from Mexico and Central America.  Typically farmworkers are unaccompanied males who leave their families behind and send money back to them.  Farm work is some of the lowest-paid work available in the United States; on the East Coast farmworkers earn 35 percent less than the national average.  According to FAN, farmworkers make 40 cents per bucket so a farmworker must pick and haul two tons of sweet potatoes to earn just $50.Harvest of Dignity challenges consumers to understand how their food is being picked and consider how we can make agricultural work become decent work rather than low-wage work that keeps people in poverty.