Several weeks ago, some colleagues, volunteers, and I gathered outside the Whole Foods headquarters in Austin for the launch of our Behind the Barcodes campaign, raising awareness of the inhumane conditions and poor wages seafood workers face working in Whole Foods’ global supply chain.

Despite our efforts to meet with the company to discuss ways of working together to make improvements for these workers, Whole Foods never responded to our request and continues to remain silent. We even reached out to the new parent company, Amazon, for an opportunity to talk and still, silence. This silence is deafening—I’ve always thought of Whole Foods as a sustainability leader within the sector, but our research tells a different story and we deserve
better.

As part of this new campaign, Oxfam assessed and ranked six of the biggest US retailers (including
Walmart, Kroger, Albertsons, Costco, Whole Foods and Ahold Delhaize, the parent company to
US retailers such as Food Lion, Giant, and Stop & Shop) across four themes–transparency,
workers’ rights, small-scale producers, and women’s equity. With a total overall score of 2%,
Whole Foods ranked second lowest among those six retailers, with Walmart and Costco scoring
ahead of them. In the supermarket sector, supermarkets like these six squeeze profits from their
suppliers while the workers and farmers who produce the food for their shelves end up suffering
the most. Workers are left powerless and voiceless in a supply chain where executives at the top
are going home with hefty salaries.

Whole Foods is one of the lowest performers on the “Worker” indicator in Oxfam’s scorecard,
which measures, among other things, supermarkets’ ability to reduce the risk of workers being
exploited by their suppliers and their commitment to good labor practices throughout their
supply chain.

Additionally, Whole Foods did not deny that it currently sources or has sourced shrimp from one
of the shrimp processors or exporters in Indonesia and Thailand where Oxfam and others
interviewed workers and found appalling working conditions. This indicates that the company
sold products in its stores very likely linked to at least some violations of these workers’ rights.
Whole Foods also failed to demonstrate a serious commitment to improving working conditions
in its supply chain. In 2015, a media investigation uncovered terrible working conditions in a
shrimp processing factory in Thailand connected to Whole Foods’ supply chain. Whole Foods
issued a strong response, claiming in part that it would now be “going beyond our existing thirdparty
audits of processing facilities by conducting our own on-site inspections.” But as this new
research from Oxfam and others shows, serious labor rights violations continue to exist for
workers across the region, and there are limitations in the auditing system in uncovering critical
issues around workers’ rights.

One of the big outcomes from the media attention was the creation of the Thai-based Global
Seafood Task Force, which is focused on addressing issues of labor rights abuses and other social
concerns within the Thailand seafood supply chain. And yet, Whole Foods is one of the only major
US food retailers that does not take part in this initiative, which demonstrates a failure to work
collaboratively with stakeholders to address these critical issues.
So what needs to change? Whole Foods needs to make considerable progress, especially in terms
of supporting and empowering women and committing to greater transparency within its supply
chains. While the company does recognize some labor standards and workers’ rights issues, along
with the importance of value distribution to small-scale farmers in its supply chains, most of its
sourcing policies are completely opaque making it almost impossible for consumers to know how
their food is produced.

Although Amazon now owns Whole Foods, at the time of Oxfam’s assessment we did not
evaluate Amazon’s policies. However, as the parent company it has an obligation to consumers
and shareholders to address and resolve human rights violations in its supply chain, and that
includes Whole Foods.

While Whole Foods has a lot of room to improve, all supermarkets need to step up. Overall, US
retailers scored very low on Oxfam’s scorecard across all four themes assessed, with the lowest
scores found in the transparency and women categories. These scores demonstrate that retailers
have barely shown any awareness on these issues and have yet to show that they are prioritizing
human rights, due diligence, supply chain traceability, living wage and important gender
inequality issues. 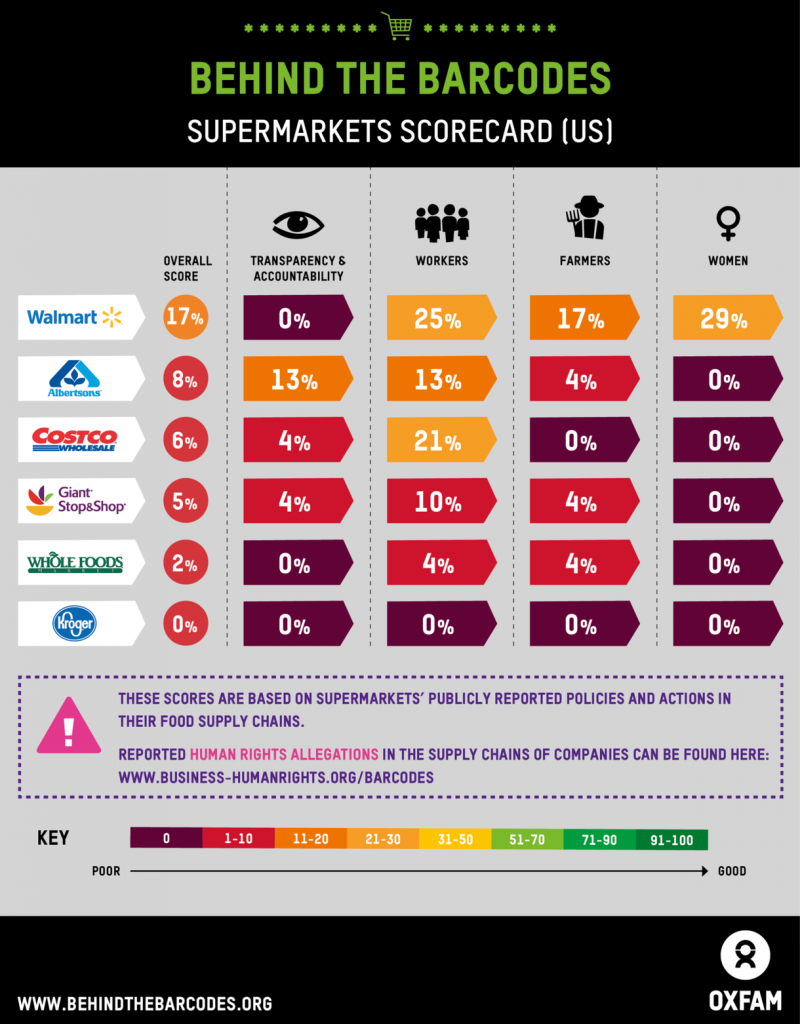 Already, thousands of Whole Foods’ customers have taken action and spoke out, saying to
Whole Foods that human suffering should have no place in its supply chain and here is what the
company should do about it:

And while Amazon is touting great savings for Prime customers at Whole Foods locations and
Whole Foods is promoting its conscious consumerism, both Amazon and Whole Foods should
be tackling the issues facing the workers and farmers who make their brands so popular. If you
are a Prime Day customer at Whole Foods, think of it this way: If Amazon gives you 10% off
your Boom Boom Shrimp what does that leave for workers who already make wages as low as
$2 per day?

Before you snag that Prime Day deal, take action so these companies make significant changes
and restore our confidence.