A message to those attending the UN ‘s Third International Conference on Financing for Development in Addis Ababa this week.

As it turns out, extreme inequality is a great investment opportunity. A couple of Citigroup researchers figured this out nearly 10 years ago and laid out a strategy to help investors capitalize on this worrying trend. I wonder if we can use the same strategy to finance the end of poverty in developing countries?

The Citigroup researchers picked up on an interesting dynamic about the economies of a handful of rich countries. In recent decades, the well off have become increasingly richer, while everyone else became poorer, or stayed the same. This is the crux of the inequality problem in the US, the UK, and other advanced economies. As the rich captured more shares of national income, their spending came to dominate total economic activity. That is, consumption and spending by the rich now far out weighs spending by everyone else. The researchers named this condition “plutonomy.”

Here’s the rub: As the rich have pulled away from everyone else, so has the cost of expensive stuff that the wealthy covet. This is illustrated below. As the chart shows, prices of expensive products began pulling away from the Consumer Price Index around the same time inequality started to take off in wealthy countries. 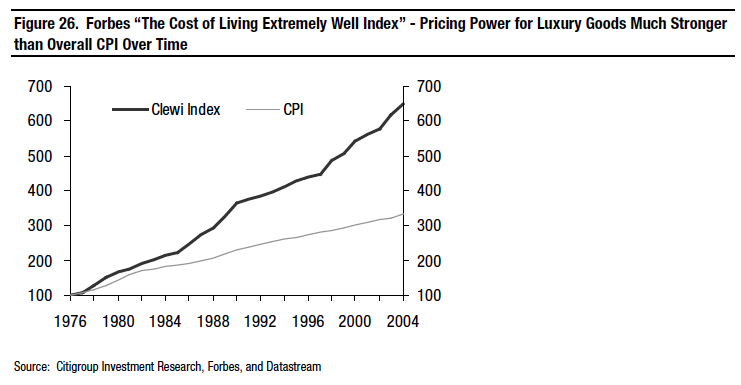 The Citigroup researchers made three observations leading them to develop a plan for making money off of rising inequality. First, as shown above, the things rich people splurge on are becoming more expensive. Second, but related, the more expensive luxury goods become, the more the rich want to buy them (defying laws of supply and demand). Third, inequality isn’t going away anytime soon. In fact, it’s becoming worse, and that’s great for their investment strategy because it feeds into points one and two.

To take advantage of inequality, the researchers suggest investors put their money into what they call a “plutonomy basket.” This is a stock portfolio made up of the luxury items and toys the rich desire. To make their case, they tracked the success of what a plutonomy portfolio would have achieved since the mid 1980s. In this case, their basket returned an annual average close to 20 percent, beating out the S&P 500 and other indices.

This makes me wonder. Why should only investors get to make out on rising inequality? This week, high ranking government officials, along with leaders from the NGO sector, are meeting in Addis Abba for the UN led Third International Conference on Financing for Development. Their aim is an agreement to help developing countries secure much needed investment finance to spur economic development. Developing countries have had a hard time creating inclusive economies without investment to build roads, clinics, schools, and factories.

Developing countries should capitalize on the world’s inequality problem by investing in plutonomy baskets to fuel their development. We already know that many corrupt leaders in poor countries enjoy yachts, expensive champagnes, and other trappings of the super rich. Often, their wealth comes from stealing revenues meant for public spending—the kind that could finance inclusive development. For instance, when politicians give foreign corporations the country’s natural resources at bargain prices in exchange for kickbacks. Investing in plutonomy baskets could be a way for poor people to take advantage of the extravagant spending habits of today’s wealthiest people (including their political leaders).