How can so many corporations make their goods and services so cheap?

How can Walmart sell shirts for $3.99 and make a profit? How can McDonald’s offer menu items – hamburgers, drinks — for one dollar?

It’s not like these goods are just dropped down from another country. These businesses have people in them: taking your money, stocking shelves, dropping those fries in hot oil, sweeping floors. These people do get paid, something, and they stay alive, somehow.

So what’s the secret ingredient to keeping prices so low and workers paid so little?

For some of the answer, look to your federal taxes. There you are paying for benefits that were intended to provide a very vital and necessary safety net for those in need: Medicaid and Children’s Health Insurance Program benefits, the Earned Income Tax Credit (EITC), SNAP (food stamps), and Temporary Assistance to Needy Families.

But these systems are being abused – not by poor people who don’t want to work — but by corporations who have figured out how to take advantage of these benefits. They know they can pay their workers very low wages, and then rely on the net of benefits to save their employees from falling through to hunger and homelessness. In one famous case, a McDonald’s employee help line offered information about applying for food stamps.

Yes, that’s food stamps for an employee. Who works. For a multinational company that sells food. 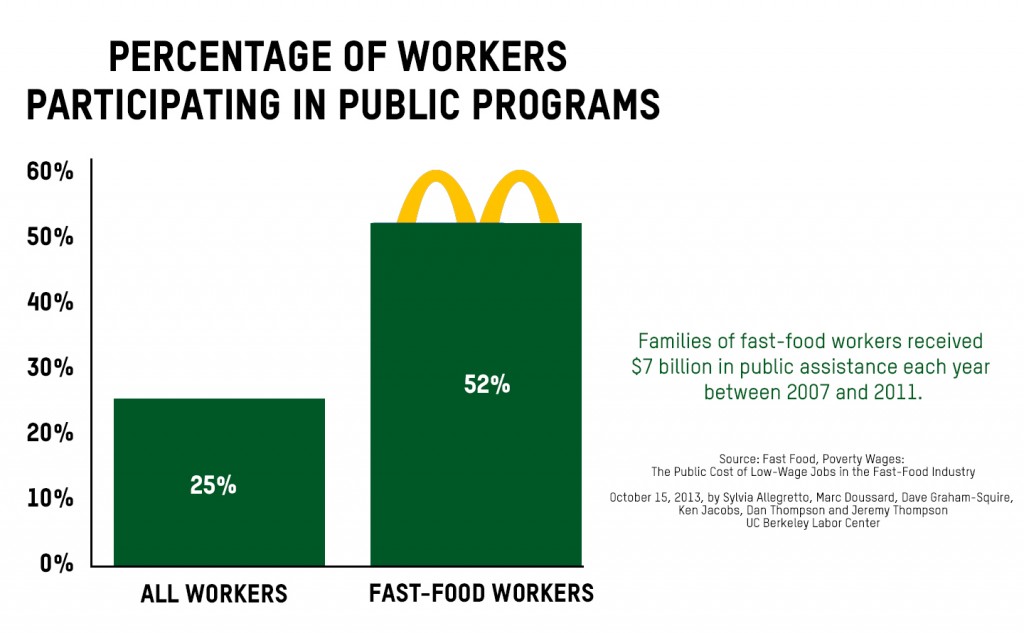 The people who receive these benefits are workers who get paid so little they can’t make it on their pay, no matter how many hours they work. They are front-line fast-food workers whose median pay is about $8.70 per hour. They are retail associates, home health-care workers and tens of millions of other American workers who earn $8, $10, or $12 per hour. Many are heads of households. Some can’t get full-time jobs. And most do not receive health insurance, pension plans, or paid leave from their employers. These low-paying jobs account for most of the new jobs in our recovering economy.

Of course, these programs are vital to survival for millions of Americans. The problem is, they also enable many businesses to keep wages unrealistically low (and not offer health insurance).

Why do we allow companies to eat up our tax dollars in this way? Why aren’t they benefitting people who are truly in need – those who can’t work and genuinely need assistance? The deficit grows larger as profits grow higher.

There is a quick and easy remedy on hand that would alleviate some of this chronic illness. A simple increase in the minimum wage to $10.10 per hour, as proposed in bills before the Senate and House, would: increase earnings for one-fifth of the workforce; lift five million people out of poverty; reduce the disparities that have made the United States the world’s most unequal rich country; and cut federal spending on social programs that were never intended to support people who work hard—and should be earning a decent living—or the companies that employ them.