Policy-makers put a lot of faith in education as a pathway toward prosperity—for individuals, for families, and even for entire countries. And for many, education offers the possibility of economic mobility and, perhaps equality of opportunity.

For Oxfam building human capital through education is not just good for society and families, but should be considered as something closer to a human right.

This case is easier to make—and more salient—for primary and secondary education. For more advanced education, a careful analysis is worthwhile to make sure the value to individuals, families, and societies is worth it. In general, the presumed answer is yes. But, as the costs of getting a college education rise, the question increasingly gets asked and doubts creep in about whether it’s worth it.

I came across a report released earlier this year on “the economic case for higher education” in the USA produced by the US Departments of Treasury and the US Department of Education.  Those are formidable authors, so I thought it would be an impressive document. And it is.

Despite increasing cost, college education has a high return-on-investment. Incomes for people who have college education are 64 percent higher than for those who do not. And people with college education often receive other benefits, like pensions, health insurance, paid time off. And they are employed more, or rather, experience less unemployment.

In general, the wage premium for going to college has accelerated since the early 1980s. This might imply a shortage of college-educated people for the labor force, but it also reflects the stagnation of wages for non-college educated people.

For individuals and families, it’s clear that college is a good bet. Individuals that start life in a poor family (in the lowest income quartile), but who get a college education, reduce the chance that they will also be poor by more than half.

But the positive story of college education and prosperity begins to fray with this graph: 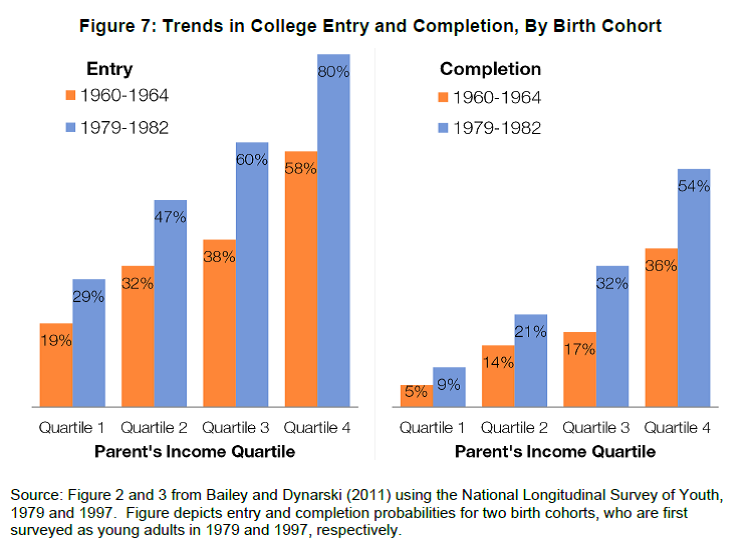 Here we see that college is still a distant dream for the overwhelming majority of poor Americans (bottom or first quartile on the left).  Less than one-third starts college, and less than one-tenth graduate. Compared to people in families with more money, poorer kids enroll at much lower rates, and once they enroll have a much harder time graduating. While the trend has been upward for poor people over three decades of college enrollment and graduation, the improvement has been for every income level, not just poor families (the orange v. blue bars). In fact, the improvements have been faster for higher income levels—with the rate of  improvement in college entry and graduation highest for kids in families in the third quartile.

So richer kids have an easier time getting to college, more success sticking with it, and get higher incomes as a result. Things have been getting better for them over the years.

A college education is a great opportunity and is an engine for class mobility. It could be an engine for increased equality. But is an engine that is unavailable to kids from the lowest class really an engine of opportunity at all? If college delivers higher income to graduates, but is denied to poorer families, then does it actually help transmit increased inequality?