Do we even have better global market information on food commodities?

Rice was a crisis commodity in 2008.  Something like 2 billion people rely on rice as a daily staple and prices were spiraling out of control.  Rice prices were one of the most dramatic features of the “global food price crisis” that exploded into headlines, caused riots in many developing countries, and alarm among political leaders across the world in 2007 and 2008. 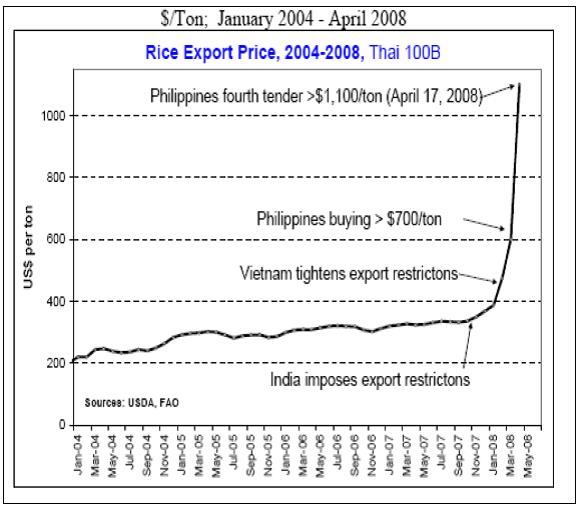 Seeing the problem and recognizing the threat to international markets and political stability, the G20 leaders embraced food security as a focus, starting in 2010 with France leading the charge.  A dazzling sequence of meetings were convened and papers commissioned.

For all the concern, and at the end of all this activity, very little was actually done.  The G20 has declined to take up the structural issues around food prices and global food security. Probably the most significant accomplishment of the G20 on food security has been the creation of the AMIS, the Agricultural Market Information System.  The idea was to create a shared resource for better information on international food commodities.

So, three years later, do we have better global market information on food commodities?  Especially rice, since it’s such a sensitive and political food?

G20 countries produce 80 percent of the world’s rice, so you might think that AMIS could give us some good information on the situation with global rice production and inventory.  But this chart shows how bad things are: 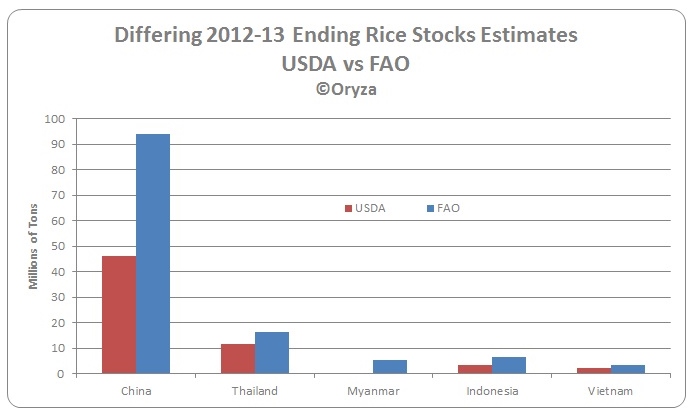 China is the world’s biggest rice producer and consumer.  What happens there dwarfs almost everything else in the market.  China is a member of the G20.  But how much rice does China have?

That’s a pretty big spread between estimates.  Either China will hold about one-tenth of global rice production at the end of the year.  Or it might hold twice that.   Or maybe neither is right;  because the truth is we really don’t know.

It’s important.  Knowing if there’s rice available – whether China might be buying or selling – determines a lot about the price of rice globally and whether the market is stable.  But we don’t know.

Comparatively small factors can have a big impact on rice markets.  India isn’t a big rice exporter – about 5 million tons a year.  But an export ban announced by India in 2007 was one of the primary drivers for panic in rice markets that sent rice prices through the roof.

If you’re an analyst trying to guess what prices will be, this is a mess.  More importantly, if you’re concerned about food security and trying to prepare for emergencies and price spikes, there’s little here that helps.  The difference between the two estimates for Chinese rice stocks could consume all global rice exports.

No one really knows or has good information. China is opaque, even though it’s a huge factor in global food prices.

AMIS doesn’t seem to be cracking that nut, much less other information gaps, like how much big trading companies hold.

So, what is the G20 accomplishing on global food security?