Economic growth—the kind America enjoyed during its longest decades of prosperity —does not happen in countries with chronic income inequality.

As the President works to put the American economy back on track in his second term, I think the mandate of the election is clear, if Obama will listen.

Economic growth—the kind America enjoyed during its longest decades of prosperity (from the mid-1940s through the 1970s); where workers earn a fair wage and unemployment is low—does not happen in countries with chronic income inequality.

Among developed countries, the United States has the highest levels of inequality. This is an unsettling trend that has worsened over the past three decades. As we know, chronic inequality is bad for growth and threatens macroeconomic stability. Societies with high income inequality also suffer from greater health and social ills (including crime, sickness, violence, shorter life spans, & stress) than more equal ones.

Throughout America’s greatest period of prosperity and growth, inequality steadily declined. Part of the reason why was top earners carried a high tax burden, helping to create a society of real equal opportunities. From the end of World War II until the mid-1960s, the top marginal individual tax rate was 90%, falling to 70% in 1964. When the proponents of trickle-down economics came into power during the early 1980s, that rate fell to 50%, then 28% in 1988, turning higher to 35% (where it is now). The trickle-down theory, also called supply side economics, claims that privileging the super-rich somehow makes the poor and middle classes better off.

Instead, the era of falling tax rates for the highest earners has enriched the top, while everyone else’s wages have stagnated or declined. Worse, the privileging of top earners over the past 30 years has generated an inequality gap not seen since the eve of the Great Depression. 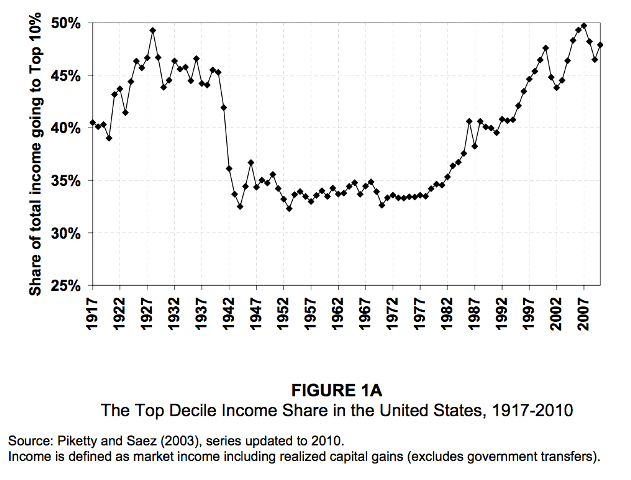 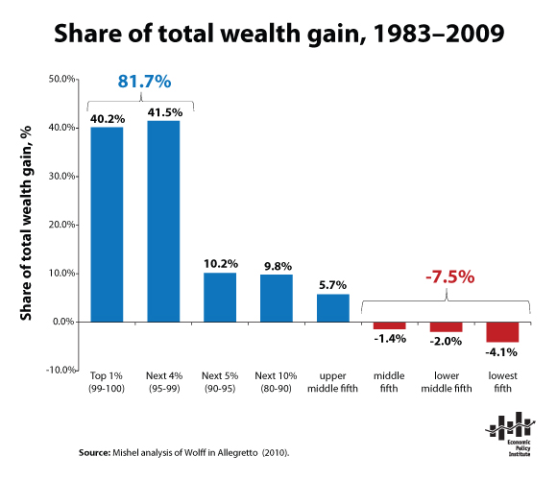 Though the very top earners were taxed heavily from the 1940s through 1970s, innovation and American capitalism flourished. Entrepreneurs competed to build world class industries and firms, ushering in new technologies that radically changed the human experience. And they were rewarded for their sweat and tears handsomely. At the same time, they helped ensure Americans at all income levels had access to education and other opportunities to pull themselves up the income ladder.