The hype is there. But what this means for climate action and poverty reduction is far from clear.

Big changes are taking place in the energy landscape. Prices for renewables like wind and solar are falling. Coal appears to be on the back foot. This is unambiguously good news.

But as the world tries to meet growing electricity demand and confront our climate crisis, natural gas presents a conundrum for policy makers and advocates. A growing global market is driving hopes that natural gas could support a transition away from coal while generating much needed revenues in developing countries. At the same time, though, evidence is mounting about the large impacts natural gas could have on the climate.

Oxfam’s new report “Natural Gas for Development?” explores the complex risks and opportunities presented by natural gas for developing countries. We ultimately call for caution around investments in this space.

Excitement around natural gas stems from a number of factors.

First, natural gas is a less carbon-intensive source of energy for power generation than coal. Electricity from a new gas plant, for example, produces 50 to 60 percent less carbon dioxide than that same electricity produced with a typical coal plant (though the overall picture is a bit more complicated—see below).

Second, natural gas can back up solar and wind power production by picking up the load when the sun goes behind a cloud or stopping generation when the wind starts blowing. Coal plants can’t do this since they require high temperatures, and thus sustained operation, to achieve efficiencies that make them cheap sources of energy.

Last but not least, there’s a lot of it. Proven reserves of natural gas increased by 50 percent between 1998 and 2018. While most of these increases were in countries that are established producers (such as Turkmenistan, Qatar, Iran and the US), several large finds occurred in developing countries (such as Mozambique, Tanzania, Senegal and Mauritania). 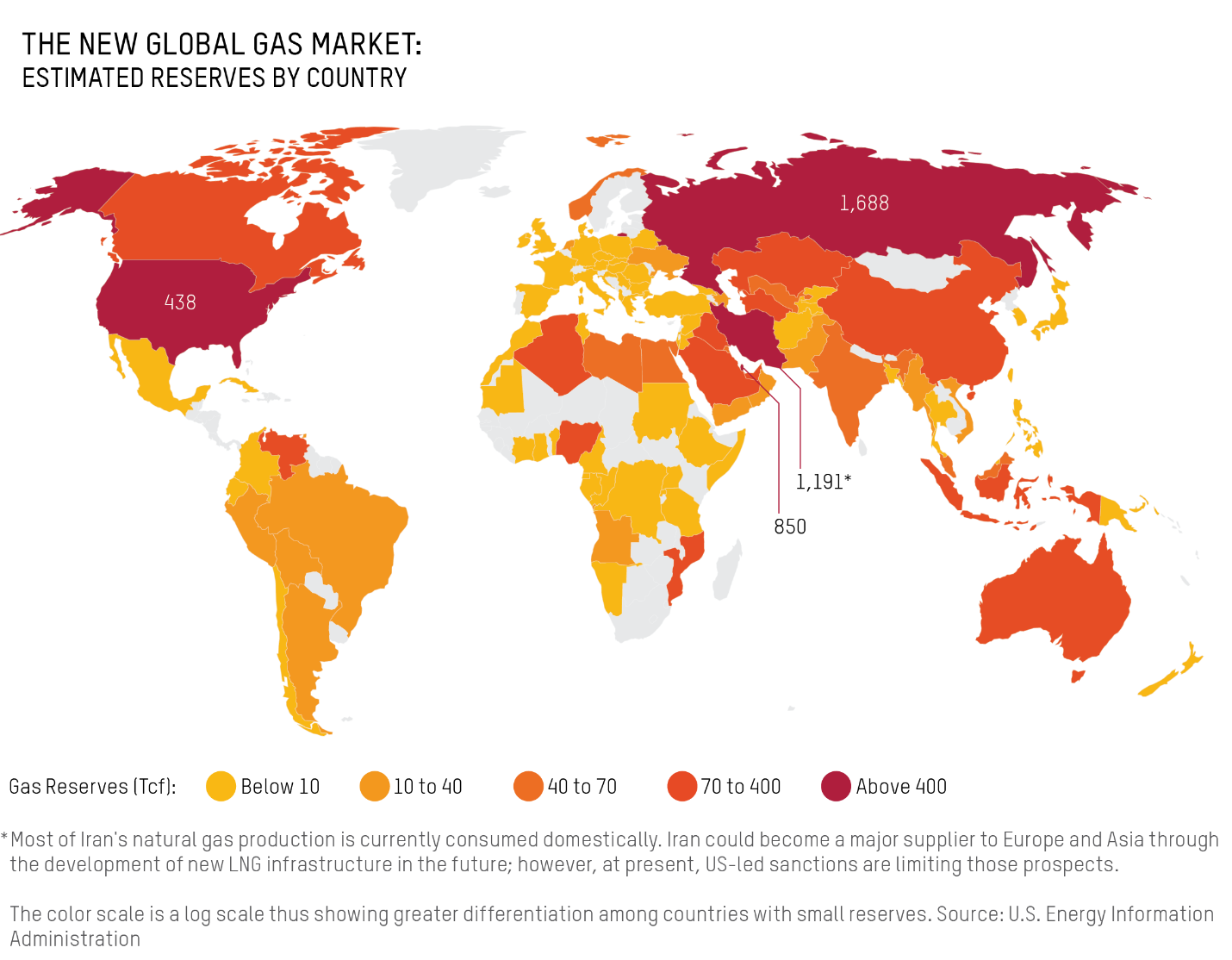 So, what’s the catch?

First, burning natural gas still produces CO2, albeit less than burning coal. If we burned all of the world’s proven natural gas reserves, we would use around 90 percent of the remaining carbon budget—which is the amount of CO2 we can emit while maintaining a 66 percent chance of keeping global average temperature increase below 1.5oC.

Second, it’s not just the CO2 we have to worry about. Natural gas is mostly methane, which is itself an extremely potent greenhouse gas—having 86 times the warming potential of CO2 in the short term. This is a problem because the production of natural gas tends to result in methane emissions (also called “fugitive emissions”). When you account for these, the climate change benefits of a switch from coal to natural gas are potentially negated.

Third, incorporating natural gas into national energy systems requires very expensive infrastructure (e.g. underground pipes, extraction platforms and wells, and large import and export terminals). Such investments take years to pay back. And since they are paid for through the sale of gas, there is a real risk: Instead of driving a transition away from fossil fuels, investments in natural gas could lock us into a fossil-fuel driven future that takes us well beyond the safe limit for carbon emissions.

Finally, it might not be easy for developing countries to capitalize on potential revenues from natural gas. Growing global demand for the product along with expanding supply is driving the integration of the global gas market. While this means that countries with small reserves can now sell their product on the market, it also means they need to compete on price with the major gas powers. For example, African countries are located far away from the Asian market where most of the growth in gas demand is expected to occur. With substantial shipping costs, the ability of new African producers to compete with the likes of Australia is in some doubt.

Where to from here?

The gas conundrum is a significant one. Some advocates argue that all gas should be left in the ground along with other fossil fuels and investment should focus on renewables. While these arguments should be taken seriously given the urgency of climate change, the truth is that energy storage is simply not yet capable of eliminating the need for fossil fuels, invoking complicated questions about which countries should benefit from the sale of the remaining fossil fuels.

Developing countries need to tread extremely carefully. While opportunities for raising revenues from gas sales exist in certain contexts, these are subject to changing gas prices which would shift dramatically if the world placed a price on carbon. On the other hand, there are real questions about whether it is fair to ask extremely poor citizens to likely pay more for their energy in order to address a problem they have done almost nothing to create.

In such an uncertain context, our report recommends the following:

Want to read more? Download Oxfam’s latest report where we explore these issues in greater detail.