“Like many Americans I was feeling squeezed. I thought it was my imagination—but the film demonstrated that it wasn’t. The rich are getting richer and the poor poorer. The decline of unions, tax rates on the wealthy, stagnating wages, and rising tuition are all real.” Sophia Lafontant, Senior Alliance Advisor, after seeing the film

By the end of Robert Reich’s new film, “Inequality for All,” he promises that all of your assumptions about “why the system works like it does” will be challenged. He doesn’t disappoint.

Those who go to “Inequality for All” will not only walk away having taken a master class from Reich (though luckily without UC Berkeley tuition), but also with a greater understanding of who Reich is as a person and why he has been raising the red flag about income inequality in the US for over 30 years.

“This is what counts for most people,” Reich says in the film. “Good jobs, good wages, good opportunities for their kids—this is where people live.”

Fueled by Reich’s compelling personality and communication skills, clear and captivating graphics, and vignettes of stressed families facing real financial struggles, viewers of the film learn just what it means for the US to have the highest inequality of the developed nations, how we got here, and why it matters.

The peak years for income concentration in America, 1928 and 2007 as represented in the film via a suspension bridge of the last century (see above), are perhaps not a surprise to those already aware of growing inequality in the US. Using this graphic as a base, the film overlays inequality’s relationships to stagnating and widening gaps in wages, the decline of unions, investments in higher education, and political polarization.

Reich ends the film with a call to action, pointing out that the disparity between the values in which we believe and the reality in which we live that is the fuel for social change. Despite Reich’s own struggles, he says viewers must know that history is on the side of positive social change.

Here’s hoping so. Go see “Inequality for All,” discuss it with your friends, and see if you agree.

Here’s what other Oxfam-ers and friends had to say about the film after the screening Oxfam hosted in Washington DC on Wednesday night:

“The stories working-class stress and anxiety are heartwrenching, e.g. the mom trying to decide if she should save money on child care by buying her kid a cell phone so she can walk home alone.” Gawain Kripke, Policy and Research Director

“The film put very little emphasis on naming bad guys, which made it very different than many liberal political docs. This wasn’t “Roger and Me” or anything Michael Moore-ish by any means…I like the repentant capitalist schtick from venture capitalist Nick Hanauer and how he admitted to embracing the conservative myths of job creators of trickle down, supply side economics in the past, despite the myth’s obvious factual flaws. The power of that myth, and how central it stands to all of our economic debates can’t be overstated.” Jeffrey Buchanan, Senior Domestic Policy Advisor 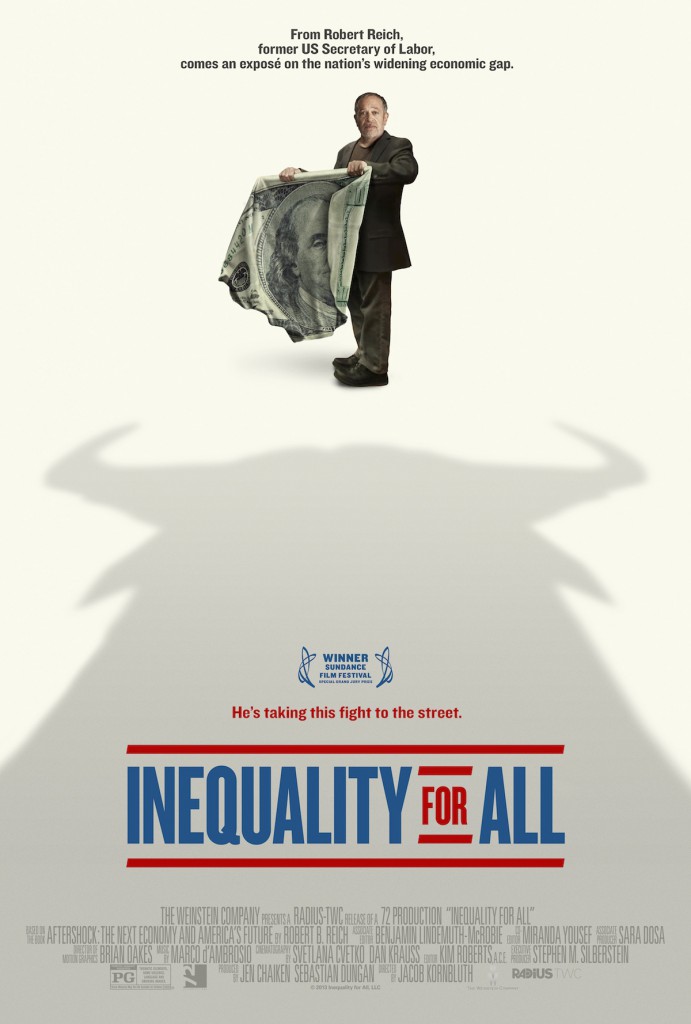 “Not sure this is the next ‘Inconvenient Truth’, but I hope so.” Barbara Durr, Deputy to Vice President of Policy and Campaigns

“Reich downplayed the influence of money in politics and told a misleading story that suggested that technology and globalization were the problems in the 1970s and 1980s and that political capture was a much more recent issue driving inequality…but it is a tribute enough to [Reich] and the director that they could make a feature film on inequality in the US that is opening today on 60 screens in 20 cities—even if the audiences will be overwhelmingly made up of those already aware of and sympathetic to the issues.” Andrew Yarrow, Senior Research Advisor on low-wage work and inequality

“I thought it was irresponsible to leave out that a lot of the deregulation of commodity trading and banks happened under Clinton with the repeal of the Glass-Steagall Act. There was a big hole in the narrative about how power shifted to the really rich.” Vicky Rateau, GROW Campaign Manager

“This film should be required viewing in every political economics course in the United States.” Alan Forde, Wine and Spirits Consultant

“The film showed inequality is not good for the poor and the rich…when we call it class warfare, we polarize ourselves even further and start ‘othering’ one another. How do we break the zero-sum game mentality?” Christine Fu, Senior Program Researcher

“Being from India, the statistics and personal narratives on the level of inequality in the US shown in the movie was eye-opening for me. Along with the US efforts on poverty alleviation and human rights worldwide, this house clearly has to be put in order. And these domestic efforts need to go in tandem with the global ones, learning from each other.” Neha Misra, Social Entrepreneur

“For a group like Oxfam, one touchstone is that inequality in the developing world is also a massive problem with significant consequences (social unrest as just one example). Inequality and the problems it brings are not just a US problem, but a global one. I wish this could have been touched on a bit more in the movie.” Eric Muňoz, Senior Policy Advisor on agriculture

“The beauty of his chart [the suspension bridge] is that it made obvious that the political moment for inequality campaigning is now, post 2010, when the wealth gap is greater than ever.” Paul O’Brien, Vice President of Policy and Campaigns

“The film suggests that curbing inequality in the US means getting the fat cats out of politics; but with Citizens United, I’m not sure how we do that. So the film actually raised my already high level of pessimism (and anxiety about how American democracy is going down the toilet). Reich is totally right that we need to have a strong belief that social change is possible, I just wish the film did more to answer the ‘how’ question.” Nick Galasso, Policy and Research Advisor on inequality

Click here to learn more about Oxfam’s recent report, Hard Work, Hard Lives, on a nationwide survey of low-wage workers in the US. The survey found that America’s working poor have a strong work ethic, put in long hours, and believe that hard work can pay off. At the same time, millions of Americans hold jobs that trap them in a cycle, unable to get ahead.