Equal Pay Day rolls around for all women in the US in early April. But it doesn’t hit for women of color until much later in the year. And, unless we see profound changes in our economy, this won’t change for a very long time.

Equal Pay Day marks the day in the year when women’s earnings finally catch up to what men earned in the previous calendar year.

The simple fact of gender means that women earn less across all levels of the economy: 80 cents for every dollar men earn. And that ratio has been stuck for some time: from 2007 to 2015, women went from earning 79 percent to 80 percent of what men earn.

This disparity clings to women’s earnings no matter their level of education, their occupation (eg, female attorneys are paid less than male), their location, their age, or their family status (single women earn less, but mothers do take an extra hit).

But, sadly, we’re not done yet. There are more “Equal Pay Days” ahead. Next up is race. As you start folding in more factors, the greater the gap grows.

In short, workers who do not fit the norm (of white maleness) start with automatic handicaps. These workers are walking uphill from the moment they enter the workforce, never hoping to reach the plateau where the white guy is walking around. And the farther they stray from the norm, the steeper the incline.

In fact, gender segregation of the workforce carries severe consequences for millions of women doing low-wage jobs. Many of these jobs are labeled “women’s work,” and involve tasks carried over from the home (cooking, cleaning, serving, and caring for dependents). When Oxfam and the Institute for Women’s Policy Research (IWPR) examined “low-wage, women’s work” jobs, we identified 22 jobs; of the 23.5 million people doing these jobs, 81 percent are women; they account for a quarter of all women’s employment.

Gender segregation means women are paid less than men doing similar jobs – even when the women are better educated or have longer tenure. For example, teachers’ assistants are 89 percent female; over a quarter of the women in this field have a bachelor’s or master’s degree; they earn a median wage of $11.43. By comparison, service station attendants are 91 percent male, have few if any credentials, and earn $11.62 per hour. Maids, 88 percent female, earn $9.94; janitors, two thirds male, earn $12.13.

This disparity has dire consequences for millions of families. Altogether, these jobs leave 8.2 million women living in or near poverty. Sixty percent of mothers depend on subsidized lunch programs for their children; over a quarter use SNAP benefits (food stamps), and nearly a quarter rely on Medicaid.

Not surprisingly, women of color do more than their fair share of these jobs. Roughly 45 percent of women in these jobs are women of color, compared with just over a third in the total workforce. Moreover, women of color are more likely to work in the more informal (and lowest paying) segments of care work. And immigrant women are concentrated in particularly difficult and hazardous jobs, such as direct care in nursing homes and manicurists in salons. 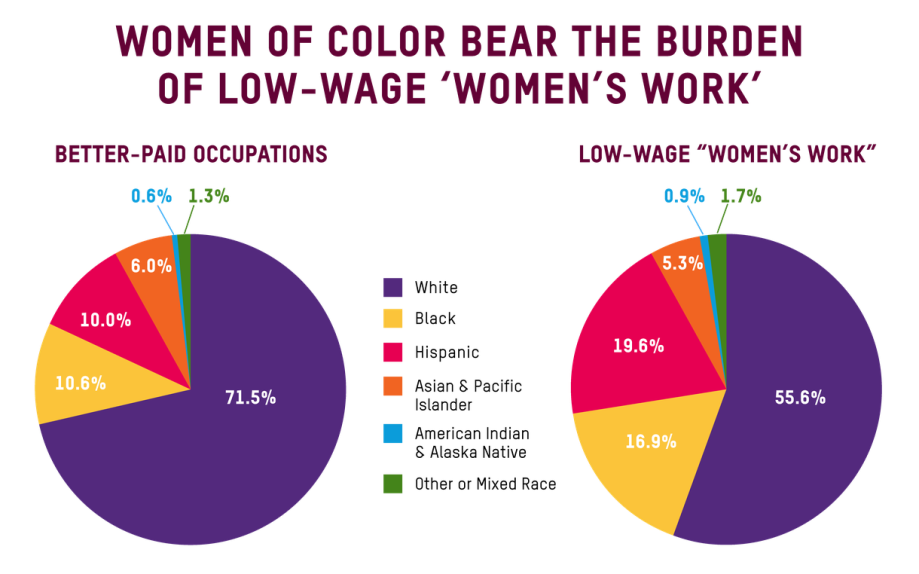 Most of the time, these jobs do not offer ladders of opportunity; many workers do these jobs for their working lifetimes. The median age is 36; three quarters are older than 25; about one in five is over 55.

And we’re in for more. In the next decade, low-wage women’s jobs will increase at one and a half times the rate of all other jobs. Even more women will be faced with the need to take jobs that undervalue their education and skills, undercompensate their contributions, and exact heavy physical and emotional costs.

So, one more deviation from the norm: If you’re poor, you’re even more “the other.” And another reason you’re to be disregarded; in fact, the current administration is quickly dismantling measures that had offered some protection to vulnerable and low-wage workers. So far, the administration has made moves that undermine the efforts of low-wage workers to get ahead. Just last week, Trump revoked the Fair Pay and Safe Workplaces order which had important protections for workers, especially women.

Unfortunately, the current political landscape has left us with few legislative options (although transparency is crucial). Which means that, more than anything, it’s vital for people who don’t match the norm to lift their voices, take action, and, hopefully, run for office. We need to work together to change the optics that come flying at us from the halls of power every day.