Whew! What a week for Oxfam!

On Monday, we released a new report on global inequality, “Working For the Few: Political Capture and Economic Inequality,”  targeted at the participants attending the World Economic Forum in Davos this week. These folks represent the global economic elite – the real movers and shakers of the world economy who heavily influence economic policymaking.

The media response has been overwhelming. Here’s a sample: 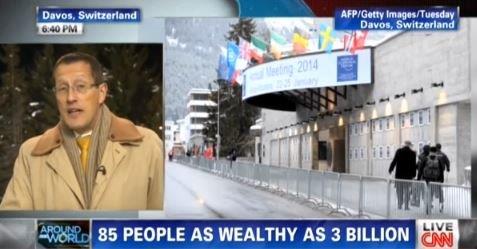 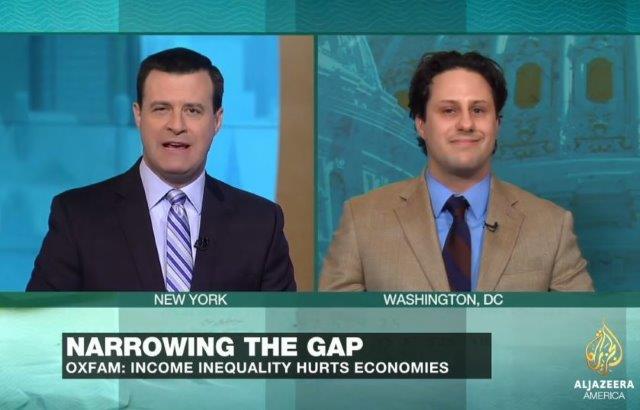 As the paper’s co-author, I wanted to quickly explain that our purpose was to demonstrate three things:

1) Economic inequality is at devastating levels, and growing. 7 out of ten people now live in countries where inequality has risen in the last couple of decades. The bottom half of the world’s population owns the same amount of wealth as the richest eighty-five people!

2) Extreme inequality is terrible for everyone, and mostly a consequence of politics, not market forces.  High levels of inequality stunts economic growth and makes it harder to reduce poverty. This is bad for the rich and poor alike.

Across the world, the wealthy are using their influence to capture politics. Our research demonstrates that governments are favoring the very rich over everyone else. This is a huge problem, as it leads to opportunity capture, where the best education, healthcare, and tax rates are given to the rich and their children; entrenching inequality and erasing equal opportunities for everyone to advance.

3) Reversing the pernicious trend of wealth inequality requires global elites to be actively involved. Toward that end, we’re asking Davos participants to commit to the Oxfam Pledge to:

We targeted the world’s billionaires because getting them to pay their taxes, and to avoid using their wealth to influence politics, will make an important difference to curb economic inequality.

Look at the U.S., where inequality is a product of the great gains made by the very top earners (the 1% and fewer). These include individuals from the financial and technology sectors who actively influenced government policymaking in ways that grew their riches many times over, while the fortunes of poor and middle-class workers stalled. As we know, the deregulation of markets that financial lobbying firms pushed in Washington, D.C. infused great volatility into the world economy, culminating with the 2008 crash and recession. Since then, as our report highlights, 95% of the post recovery gains have gone to the 1%, while the bottom 90% of Americans are now poorer.

Of course, this isn’t an American phenomenon. As the report documents, many of India’s newest billionaires made their fortunes through political bribes and corruption. Mexico’s Carlos Slim, who frequently contends for the richest person in the world, used his financial might to maintain a monopoly over Mexico’s telecommunications sector – price gouging the poor and middle classes while he became exceptionally wealthy. As impressive strides have been made to eradicate extreme poverty since the 1980s, today’s global inequality problem concerns the very top pulling away from everyone else (the group Chrystia Freeland calls the new Plutocrats). How has the top pulled away? As our research suggests, too often by coopting public policies in ways that benefit the rich over everyone else. 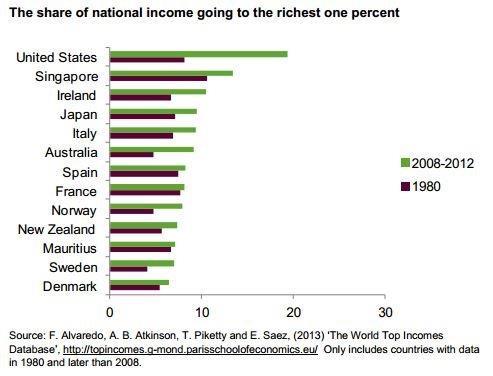 So, how can the wealthy make choices to help curb rising inequality and political capture? As we lay out in the pledge, the world’s economic elites (including big corporations) can elect to be good citizens by paying their taxes, instead of seeking loopholes and offshore accounts.

They can use their influence to fight for minimum wage floors in the countries where they invest, instead of opposing such efforts. This benefits society as a whole, since more people will have greater resources to participate in the economy, send their children to school, and lead healthier lives.

Many countries will high inequality also have regressive fiscal policies that hurt poor people while privileging the rich. Economic elites should commit to pushing for tax systems that direct revenues toward investments in human capital and stronger safety nets .

As political capture is an important driver of economic inequality, we need the influence of the super wealthy to support stronger institutional firewalls between money and politics. The alternative is skewed political representation between elites and everyone else, leading to policies that threaten to entrench inequality.