As our nation takes the weekend to “celebrate” the hardworking Americans undergirding our economy, our government is systematically weakening the rights, protections, and bargaining power of these very workers.

Labor Day has always been more about barbeques, beach days, and long weekends for me than a celebration of workers’ rights.

But this year, it’ll be hard for the day not to strike a chord—if only because of the stark dissonance between the lofty symbolic meaning of the day and the facts on the ground for so many workers.

The litany of Trump’s anti-worker policies is long and growing each day. But one policy change stands out in particular for me—the Administration’s attempt to gut the 2016 overtime rule.

One of the basic premises underlying our employment system is the exchange of work for compensation.  A worker puts in a given number of hours in exchange for wages, either in the form of salary or hourly rates.  Our law adds further protections. Under the Fair Labor Standards Act (FLSA), hourly workers and eligible salaried workers who earn below $23,660 are entitled to overtime pay if they work more than 40 hours per week.  This law helps protect lower salaried workers—especially those with less bargaining power–from working excessive hours without compensation.

Unfortunately, a failure for the threshold to keep pace with inflation has left over 12 million low- and moderate-income workers without pay when working over 40 hours a week.  The current threshold of $23,660 (below the poverty line for a family of four) means that millions workers are laboring without compensation. In fact, a meager 8 percent of salaried workers are eligible for overtime. 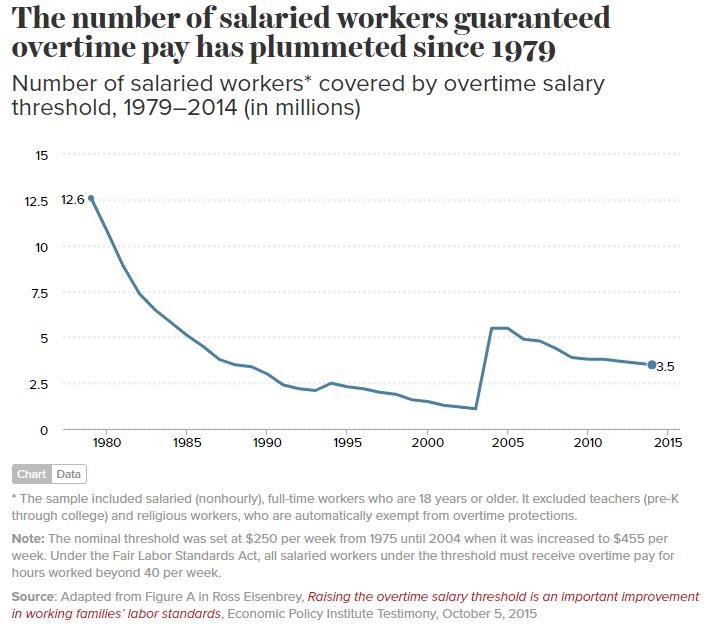 In 2016, the Department of Labor issued a revised overtime rule which raised the threshold to $47,476, and closed the more egregious loopholes.  Under the amended rule, all salaried workers—regardless of their work responsibilities or job descriptions—below the threshold would be eligible for overtime pay.

These changes were set to benefit a large range of working people, including:

Who are these workers? They are struggling to make ends meet, often falling well below the poverty line. They are first-line supervisors of food preparation and serving workers who have median wages of $34,498 per year; insurance claims and policy processing clerks, with median wages of $39,427 per year; they are customer service representatives, food service managers, social workers, first-line supervisors of retail sales workers, insurance sales agents, and counselors.  They are workers who are less likely to have employer-provided health insurance or pension coverage.

In short, they are hardworking Americans who need the raise.

Yet, in typical fashion, the Trump administration has refused to fully implement and enforce the updated rule. A few weeks ago, the Labor Department opened up a request for information on the rule, despite the fact that the 2016 overtime pay rule received nearly 300,000 public comments and engaged in two years of stakeholder engagement.

Revisiting the rule is not just a stalling tactic; it is a direct attempt to undercut the overtime pay rule and re-litigate the agreed-upon threshold.  And it will have real consequences for many workers who were promised—and then denied—their raise.

This move to deny compensation to workers is part of a devastating pattern of assaults on the most vulnerable workers:

This Labor Day, the true meaning of the day will weigh on me more heavily than in years past. I will make sure to acknowledge those who are expected to work on that day (many of whom will not get overtime pay), to truly thank those who have prepared the food for my Labor Day barbeque.  But I will also commit to some direct action.  I will ask my neighbors and friends to submit their comments in support of the overtime rule.  It’s a quick and easy way to make your voice heard.

In honor of Labor Day, will you do the same?