Is business the new progressive ally?

As a business and human rights activist I generally see corporations as a target of my advocacy. While we certainly push companies to use their influence with their peers, government, and in global forums like the UN climate negotiations in support of human rights and anti-poverty policies, Oxfam and other corporate accountability organizations are generally more concerned about political capture or regressive political influence. But following the election of Donald Trump, a new paradigm shift may be occurring. As the Trump administration appears poised to roll back regulations that protect the environment civil liberties, labor, and human rights in an unprecedented way, every CEO must stand ready to push back. While I called on CEOs to make 10 resolutions last year, only one will matter this year: to resolve to be a strong voice in opposition to the erosion of protections for people and planet.

The good news is that companies are ready to take on this role. For better or worse, Trump won without the support of corporate America, not a single CEO of the top 100 US corporations contributed to the Trump campaign, according to the Wall Street Journal. It’s noteworthy also that over 1,100 CEOs of US companies sent an open letter to President-elect Trump after the election, calling on him to bring the country together. The letter was initiated by the National Association of Manufacturers and in their related press release, the CEO and President called on President-elect Trump to “celebrate and defend the values that make our nation great … individual liberty and equal opportunity.”

Political capture has been of great concern to human rights activists, and those fighting the inequality that persists in our world. Wealth concentration can have an impact on equal political representation. When wealth captures government policymaking, the rules bend to favor the rich, often to the detriment of everyone else. The consequences include the erosion of democratic governance, the destruction of social cohesion, and the vanishing of equal opportunities for all. So while we generally are concerned about large companies lobbying for laws that erode regulation, disrespect human rights, limit corporate accountability, and increase inequality, it is interesting that the Trump campaign was largely fueled by average Americans rather than overwhelmingly by big business.

As with the Civil Rights movement, corporate economic interests often align with human rights interests. In North Carolina, the business community consistently stood in opposition to its controversial Public Facilities Privacy and Security Act, also known as the “bathroom bill” which was signed into law last March and created a hostile environment in schools and workplaces toward those with non-conforming gender identity. Likewise, when Indiana and Georgia passed a Religious Freedom Restoration Act, which many felt could sanction discrimination against LGBTQ individuals, the business community vehemently opposed it in both states. The Coca-Cola Company, for instance, stated in 2015 that it “does not support any legislation that discriminates, in our home state of Georgia or anywhere else.”

At the same time, however, we know that companies use their influence to bend the law to improve their bottom line, even when those laws have a significant impact on everyday Americans. What is more disturbing, however, is how companies often lobby not only against their future profits but also in contrast to their public positioning, marketing, and corporate profile. For example, both Coca-Cola and PepsiCo put a great deal of effort into marketing themselves as sustainable companies that care about climate change.  Yet, in a recent Forbes article Senator Whitehouse noted that both companies do not lobby individually on climate change but rather through the American Beverage Association which he characterized as “moribund on climate.” On the other hand, there are many companies already standing up to the Trump administration. Immediately after the election, hundreds of companies including General Mills, Kellogg, Mars and Mondelez signed a letter to the incoming President urging him not to abandon the Paris climate deal. In another effort, business leaders warned of economic fallout should he follow through on mass deportations of immigrants and other anti-immigrant policies.

Coca-Cola emails from Wikileaks show that the company divides its lobbying efforts on policies into three categories based on the likelihood of it materializing and business impact: monitor, prepare, and fight back. 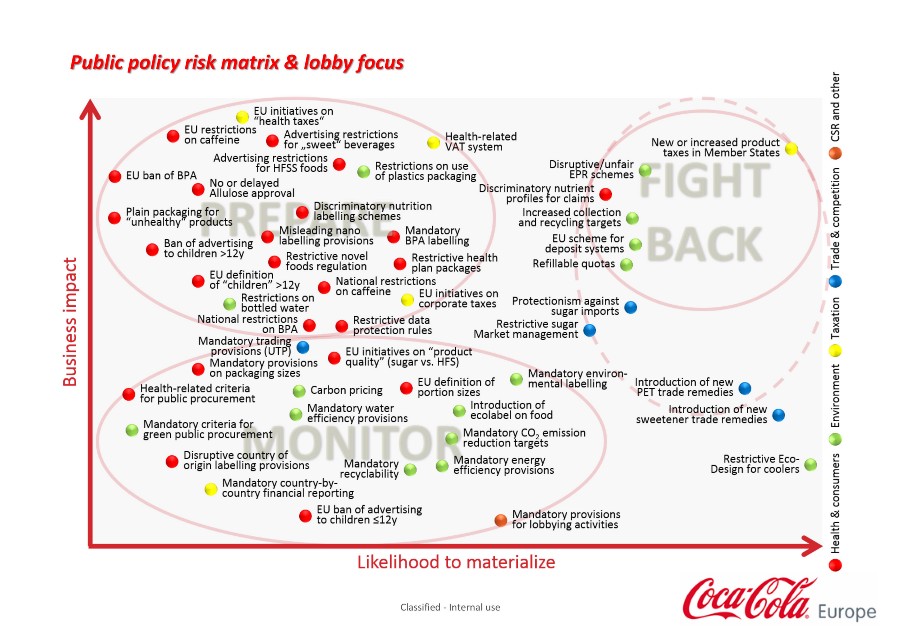 While there is nothing earthshattering about the fact that Coca-Cola maps and monitors pieces of legislation for purposes of lobbying, the double-speak that Coca-Cola employs on the environment (and other issues such as nutrition) is disheartening. A company that markets itself as one that cares about nutrition and the environment should put its lobbying muscle behind efforts that protect the environment and promote healthy diets.

In the Trump era, a more useful matrix for companies that have staked their reputation on a profile of human dignity and respect is one that tracks salient human rights impacts of the incoming administration and Congress on issues such as civil liberties, religious freedom, living wages, indigenous rights, climate impacts, reproductive rights, etc. versus the likelihood of said legislative impact materializing. This would be a useful means to engage a boardroom discussion on where the company will take a stand, clearly and publicly, on core issues of human rights – putting all that corporate social responsibility rhetoric into action in the face of real threats.

So as business leaders contemplate how to be better American citizens in 2017, they should focus on aligning their lobbying efforts with policies that preserve American values on civil and human rights, strong labor and environmental protections, and tax policies that benefit the majority rather than the few. Business leaders can and should help to preserve our way of life; so that we remain the shining beacon that the US can and always should strive to be.

Editor’s Note: Coca-Cola provided the following statement in relation to this blog: “The EU Public Policy Matrix is a dated regional document that does not reflect the overall views and tenants of The Coca-Cola Company sustainability strategy. It was an attempt to identify potential direct, financial impacts to our business, and does not mean that we are against addressing an underlying problem. Instead, in many cases, we may believe a different approach could be more effective, and more sustainable for our business. We remain strongly committed to the execution of our Sustainability strategy and the foundation of our partnerships.”