Of all the issues facing our country, Republican lawmakers have chosen to enable corruption as a top priority. Last night, Senate and House Republicans introduced a measure to allow oil, gas and mining companies to make secret payments to the Russian government and other authoritarian regimes around the world. The joint resolution introduced yesterday would effectively repeal a bi-partisan 2010 law – the Cardin-Lugar anti-corruption provision AKA Section 1504 – that requires all oil, gas, and mining companies registered with the Securities and Exchange Commission to report their tax and other payments publicly for the benefit of investors and citizens.

It’s shocking that on the eve a final vote on former Exxon CEO Rex Tillerson (scheduled for February 1) as our nation’s next Secretary of State, Senate and House Republicans want to give a big boost to oil-fueled corruption.

While questions swirl about the extent of the Trump administration’s ties to Russia, including Cabinet nominees such Tillerson (awarded the Russian Order of Friendship), Senate Majority Leader McConnell and his friends Senators Inhofe and Rounds saw fit to use their newfound power to give a gift to authoritarian leaders in Russia and around the world.

Exxon opposed the Cardin-Lugar provision while Tillerson was CEO but at his confirmation hearings Tillerson sought to assure concerned Senators, including Senator Isakson of Georgia, that he understands the importance of fighting corruption. “If confirmed, human rights, the rule of law, and anti-corruption, and transparency measures would be high priorities,” Tillerson said.

Republican reasons for targeting the anti-corruption law are spurious and full of “alternative facts.” Republicans are using the obscure Congressional Review Act to invalidate the SEC’s 2016 rule implementing the law and claim that it was unelected “bureaucrats” who pushed this through. WRONG – the SEC was belatedly following the bi-partisan will of Congress and democratic process. The provision was extensively debated and researched from 2006-2010. 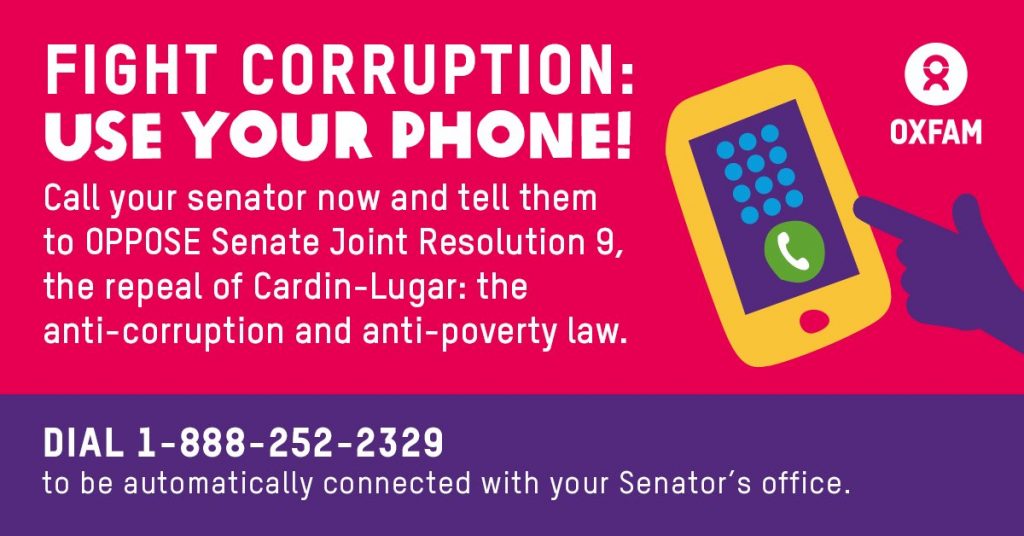 Republicans also falsely claim that this law covers only American companies and would put them at a competitive disadvantage. WRONG AGAIN– the law – and companion laws overseas – covers both US and foreign companies, including companies from Russia, China, Brazil and elsewhere. Laws in the European Union, Canada, and Norway requiring the same disclosure are already producing real information that citizens can use to hold governments accountable for how oil revenue is being spent.  Repealing this law would be yet another way that Republicans in Congress and the White House are abdicating global leadership.

Russian companies such as Gazprom and Lukoil have been forced to disclose their payments to the Russian and foreign governments. Competitors of Exxon such as BP and Shell are already disclosing payments as a result of UK law and many oil and mining companies back the law as a common sense good governance measure. The law has been endorsed by some of the world’s largest mining companies including BHP Billiton, Rio Tinto, and Colorado-based Newmont Mining, and oil companies such as Dallas-based Kosmos Energy, Shell, BP, and Total.

New payment disclosure laws in the US and elsewhere have also been a huge victory for investors. Investors worth $10 trillion in assets under management publicly endorsed the Cardin-Lugar law and the strong rules adopted by the SEC.

Senators who don’t want to associate themselves with corruption, dictatorships and Russian financial secrecy should vote NO on Senate Joint Resolution 9.  Instead of “draining the swamp,” passage of this resolution would mean filling the swamp with secret oil dollars.