In early February, three significant moments turned a spotlight on the poultry industry—the annual shareholder meetings of Tyson Foods and Sanderson Farms, and the Super Bowl. Oxfam seized each moment to shine a light on poultry processing plants, where workers endure high rates of injury and illness, low wages, and a climate of fear. Robbie Silverman, who engages directly with private industry on behalf of Oxfam, reports back on the recent advances.

Investing in the health and safety of workers isn’t just a human rights issue—it goes right to the heart of good business practice.  That’s the message Oxfam delivered recently to investors in two of the biggest US poultry companies, an industry notorious for high injury rates and abominable working conditions.

It’s also a message investors and poultry consumers are increasingly taking to heart.  This month, Oxfam presented shareholder resolutions at the annual investor meetings of Tyson Foods and Sanderson Farms calling on the companies to provide more information about the health and safety of poultry workers.  Both company proposals received strong support from investors—a clear sign that the people who own these companies are becoming more concerned about how they treat their workers.  Chicken consumers—who ate 1.3 billion wings on Super Bowl Sunday—are taking notice, too.

Oxfam’s poultry worker justice campaign began in October 2015 with an extensive exposé on conditions inside poultry processing plants.  We targeted the top four poultry companies—Tyson Foods, Pilgrim’s, Perdue, and Sanderson Farms—which control nearly 60 percent of the domestic chicken market.  We’ve been reaching out to these four companies since last summer.  Over a one week stretch earlier this month, we engaged with investors, consumers, and the public to encourage these companies to do more to protect the health and safety of their workers.

Top of the pecking order: Talking to company boards and owners

Oxfam runs an investor advocacy fund—we buy shares in every public company that we engage.  This allows us to exercise our rights as investors to pressure the companies that we own, including filing shareholder resolutions with Tyson and Sanderson calling for greater transparency in their safety and health operations.

Both shareholder proposals came up for a vote earlier this month.  Oxfam representatives traveled to Tyson’s annual meeting in Springdale, AR on Feb. 5 and Sanderson’s meeting in Laurel, MS on Feb. 11 to speak on behalf of our shareholder resolution to the companies’ board of directors, senior management, and other investors.  These efforts drew the immediate attention of companies—Sanderson provided a lengthy and detailed response in opposition to our proposal.

In the lead-up to the investor meetings, Oxfam ran online ads in support of workers that popped up all over the internet—for people searching for information on the shareholder meeting, for people who follow the companies on different social media platforms, and more. 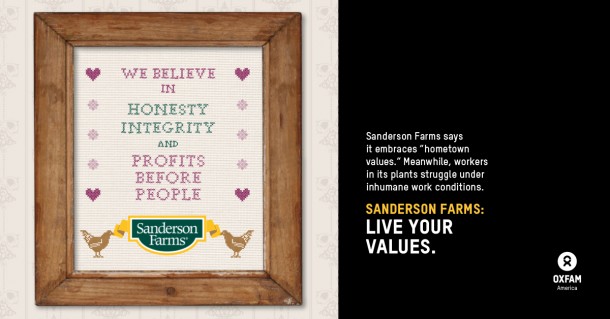 Flying the coop: Building a groundswell of support

Oxfam’s company engagement doesn’t just happen in the boardroom.  A lot of what we do is to lift up the voices of workers on the line so that company management can hear.

During the Tyson shareholder meeting, Oxfam’s local partner, the Northwest Arkansas Workers’ Justice Center, held a rally of about 50 poultry workers and local activists calling for dignity and improved conditions.

That day, the workers’ center released a new report about the industry, which confirmed the findings in the Oxfam report.  Based on surveys of 500 workers, the report detailed lack of bathroom breaks, wage theft, dangers to workers’ health and safety, and compromises in food safety.  Local media covered the rally and the survey in print, on the radio, and on TV.

Springdale’s local paper, the Northwest Arkansas Democrat-Gazette, ran two op-eds from our partners about workers in the poultry industry: Workers pay a price in poultry business and Report calls for improved working conditions.

Super Bowl Sunday is big in every way, including the 1.3 billion chicken wings consumed by the American public.  The National Chicken Council crows about “Wing-onomics,” noting that the wings “weigh 6,325 times more than the combined weights of the Panthers and Broncos entire 52-man rosters.”  Oxfam countered with its own wing statistics, such as, in one survey, 85 percent of wing cutters report inability to close hands, hand and wrist pain, swelling, and numbness.

We also ran an op-ed in the Baltimore Sun reporting on a survey of local poultry workers near the headquarters of Perdue in Maryland that reaffirmed the findings of the Oxfam report.  Our op-ed drew a response from Perdue, which we posted on our company response website.

Coming home to roost: We need you!

We couldn’t have achieved our success in engaging Big Poultry companies without your support.  Pilgrim’s holds its shareholder meeting later this spring, and you can be sure Oxfam will attend.  In the meantime, we will continue to raise awareness of the dangerous conditions poultry workers face.

We thank you for your efforts so far, and we encourage you to keep up the fight.  Be sure to sign the petition and spread the word!