Raising the minimum wage is an issue supported by voters across political ideologies – and Republican candidates have the opportunity to support workers and their families by taking a stand.

As the Republicans gear up for their October 28 debate on the economy in Boulder, Co., will any of the candidates have something thoughtful to say about key economic issues facing all too many Coloradan—and American—workers?

One-fourth of Colorado’s workers are paid less than $12 per hour and—as is true for the entire United States—the percentage of workers in low-wage jobs is increasing, according to the Colorado Fiscal Institute. Although the state is a leader in job-creation, the dark underside is that last year Colorado also had the nation’s fastest growth in the number of restaurant workers, and an increase of  two and a half times in home health aides since 2001 – two notoriously low-paid occupations.

“Living off tips is one of the worst career choices anyone can make,” said Erik, a Denver waiter who has worked in restaurants all his adult life. “Tipped employees are not guaranteed benefits, retirement plans, or a fair minimum wage.”

Although the state has a slightly higher minimum wage than the federal level–$8.23 per hour, compared to $7.25 per hour—it is travesty that so many hard-working people in Colorado and nationwide receive wages that make it all but impossible to pay for rent, food, clothing, child care, doctor’s bills, and other basic necessities. Since few low-wage workers get employer-provided health insurance, paid leave, or other benefits, the only ways to try to survive are by going onto public-assistance programs like food stamps and Medicaid or going deep into debt.

Unless the moderators ask them point-blank: “Do you support raising the federal minimum wage and, if not, how would you explain your position to the tens of millions of working Americans who struggle on low wages?”

Poll after poll should convince Republicans that ignoring or sidestepping issues like raising the federal minimum wage is anything but a vote-winning strategy.

A recent survey of voters in key swing states like Colorado by GOP pollster John McLaughlin and Oxfam America found that 87 percent of general-election voters support an increase from the current $7.25 per hour to $9, $10, $12, or $15 per hour. Moreover, by a 64-to-18-percent margin, voters say they would be more likely to support a candidate who backs an increase. 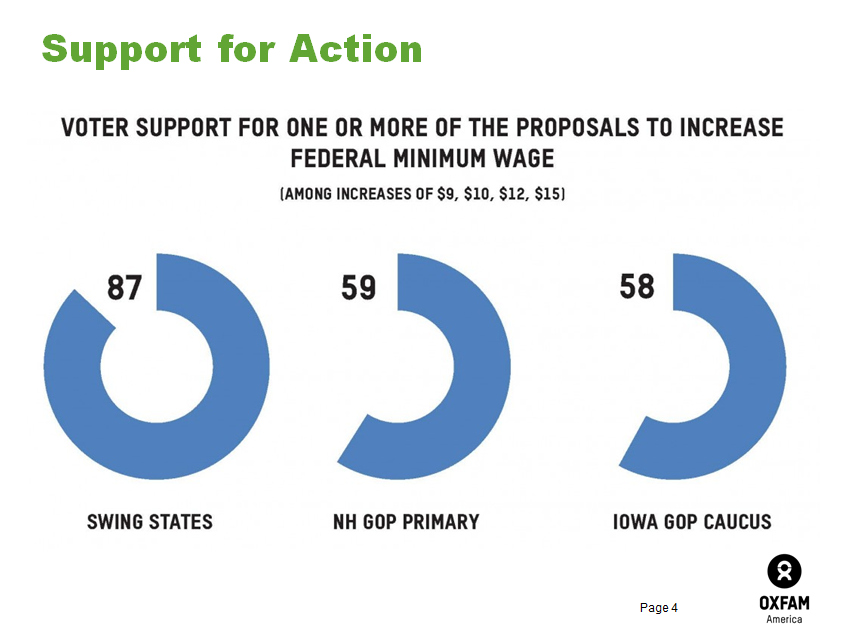 And these voters aren’t talking about wage increases for someone else. Forty-one percent said that they or a family member would benefit from gradually increasing the minimum wage to $12 per hour by 2020. In Colorado alone, nearly half a million workers and 240,000 children of these workers—not to mention other family members—would be affected by raising the federal minimum wage to $12. These include Lashanda Myrick, a 39-year-old Wal-Mart worker in East Denver who moved to the night shift to bump up her $8.50-per-hour pay in order to try to support her two children.

While many Republicans fall back on the old saw that raising the minimum wage would cost jobs and hurt small businesses, most studies show that a small increase would have little or no effect on jobs. The nonpartisan Congressional Budget Office found that the number of workers who would gain is at least 30 times as many as those who might lose. And even a majority of small-business owners, like the New Belgium Brewing Company in Ft. Collins, recognize that better compensation is good for business by increasing worker productivity and loyalty.

Every Democratic candidate backs an increase, but only Kasich, Santorum and Ben Carson have said anything in favor of the smallest of increases. Nonetheless, any Republican who hopes to be the party’s standard-bearer next fall should heed not only the polls but a comment that Santorum made during the September debate for second-tier candidates:

“Republicans are losing elections because we aren’t talking about [workers],” he said. “All we want to talk about is what happened to business. There are people that work in those businesses.”

Add your voice to the conversation and ask Republicans to #RaiseTheWage on Twitter and Facebook ahead of tomorrow’s #CNBCGOPDebate.