As Workers Memorial Day rolls around again on April 28 – a grim marker for the thousands of workers killed and injured on the job each year – it’s urgent to consider how this administration is making work more arduous and dangerous. The move to slash regulations is destroying systems that have protected and aided workers in the most hazardous jobs.

Almost exactly a year ago, a cleaner at a vegetable plant in California lost his life when he reached into a leek processing machine with rotating components. The machine caught his clothing, broke his arm, and entangled his shirt around him until he choked to death. The company was fined $95,780 for several violations.

His family was not the only one devastated that day. More than 5,000 workers are killed on the job each year—nearly 100 a week, or more than 14 every day. The list of fatalities on the Occupational Safety and Health Administration (OSHA) website is harrowing: Construction workers falling off ladders, farmworkers exposed to massive amounts of pesticide or buried in grain, slaughterhouse workers caught in machinery.

This is why the Department of Labor (DOL) created OSHA in 1971: to establish safe practices, inspect workplaces, levy fines, and require employers to report injuries and fatalities. And, although drastically understaffed, the agency has made a difference. Since 1970, the number of worker deaths per day dropped from 38 to 14; worker injuries and illnesses decreased from 10.9 incidents per 100 to 2.9.

Which is to say: thousands of workers are alive today because of OSHA. The AFL-CIO puts the number of saved lives at over half a million.

Now, however, the game is shifting, and fast.

The Trump administration is aiming to add jet fuel to the engine of economic growth with measures that specifically endanger workers – by slashing regulations. Loosen the reins, burn the coal, remove the inspectors. And, indeed, the gears are roaring faster – delivering stratospheric rewards to shareholders, and bumping up speed, productivity, profitability.

The down side, of course is that the “regulations” aren’t just rules on the books; they are measures that keep the machine running smoothly, and protect the rest of us— workers, consumers, and those of us who need to breathe air and drink water.

The ones bearing the greatest burden, however, are people in dangerous jobs. From farms to construction sites, they breathe in pesticides, hang live chickens on shackles, climb tall ladders to hot roofs, unload massive containers. They need “regulations” to reduce risks, offer adequate care, and enhance protections.

And that’s what being stripped.

How Congress and the President have dismantled protections

To be clear, OSHA does vital work despite the meager resources at its disposal. Federal OSHA now has only 764 safety and health inspectors, and all the state OSHA plans have 1,057 inspectors: one OSHA inspector for every 77,908 workers. OSHA’s FY18 budget of $553 million amounts to $3.61 per worker.

OSHA penalties increased under the Obama administration, but are largely too low to be a deterrent. In FY17, the median total penalty in fatality cases was only $9,080 (reduced to $7,500 after settlements). When OSHA returns to a workplace for follow-up inspections, they often find the violations still in place; employers determine it’s less expensive to pay fines than to fix problems.

Nonetheless, the current administration is working to roll back, repeal, and dismantle the protections that remain. Below are just a few of the changes they’ve made. 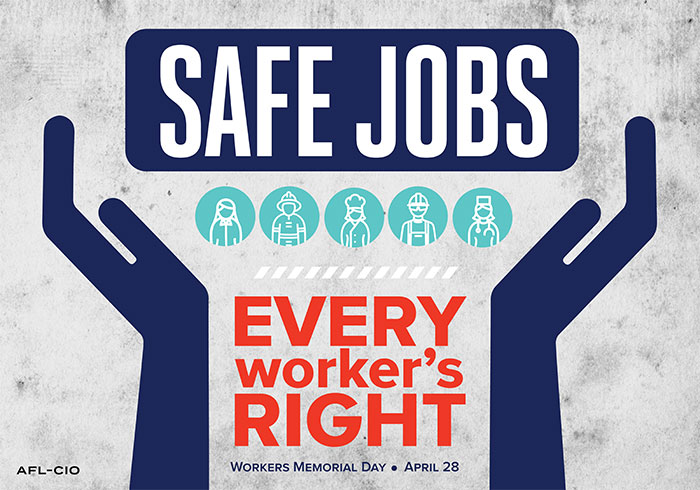 The worst scofflaws in the US

Today, the National Council for Occupational Safety and Health (NCOSH) published its annual report on The Dirty Dozen: the most dangerous employers in the US. The businesses cited range from Amazon to Case Farms (a poultry processor in North Carolina). The workplaces, and the dangers, vary significantly; but the disregard for the safety and health of workers remains the same.

The truth is, when employers are unshackled, they can make more money, more quickly. But they can also cut corners on the things that protect workers, and, literally, save lives.

The cost for higher profits is simply this: the lives of thousands of workers. We believe that is a terrible toll for the workers, and their families, and the fabric of our society.

Join us as we mark Workers Memorial Day, in one of many rallies around the country. And urge the Trump administration to stop the rollbacks and weakening of standards and enforcement. (See this letter for more information.)