We’ll give you three good reasons.

At the annual wealth love fest in Davos today, President Trump called on the rich and powerful to work with him “to advance prosperity, security and peace.”  He framed his hopes “for a future where everyone can prosper and every child can grow up free from violence, poverty and fear.”

This, of course, is what the poorest in the world would want to hear from a US President.  So why should anyone who cares about the fight against poverty be grumpy about the speech?  Why should we not just celebrate and hold him to account on those promises?

First, there’s the “America First” ideology—President Trump may have followed the prompter to say that “America First does not mean America alone,” and he shared win-win sentiments with his elite audience, but no one there heard Trump as a champion of inclusivity.   For more than a year, he has fostered a foreign policy with a morally impoverished zero-sum view of the world.  He wants America to stop paying for a rules-based international order in which everyone wins.  He seeks to decimate decades of efforts to build a global economic playing field that is inching toward helping the poorest, not just profiting off their backs.   America First is an ideology that doesn’t just create false choices.  It relies upon them:  For Americans to have good jobs, we have to stop fostering the economic well-being of other countries.

What ideology could he have offered?  One with a more inclusive “we” that better reflects the multipolar and interdependent world in which we now live, and relies upon strong and stable societies everywhere for America’s collective “security, prosperity and peace.”  Even though he campaigned on the promise to confront inequality and unrig the rules that keep people poor, his Davos presence and speech were a celebration of inequality and a commitment to keep rigging the rules to advance American interests at the expense of others.  Trump simply can’t hold an ideology like “America First,” and make a legitimate claim to be a global statesman.  (See our Davos report on what he should have said to address growing inequality here). 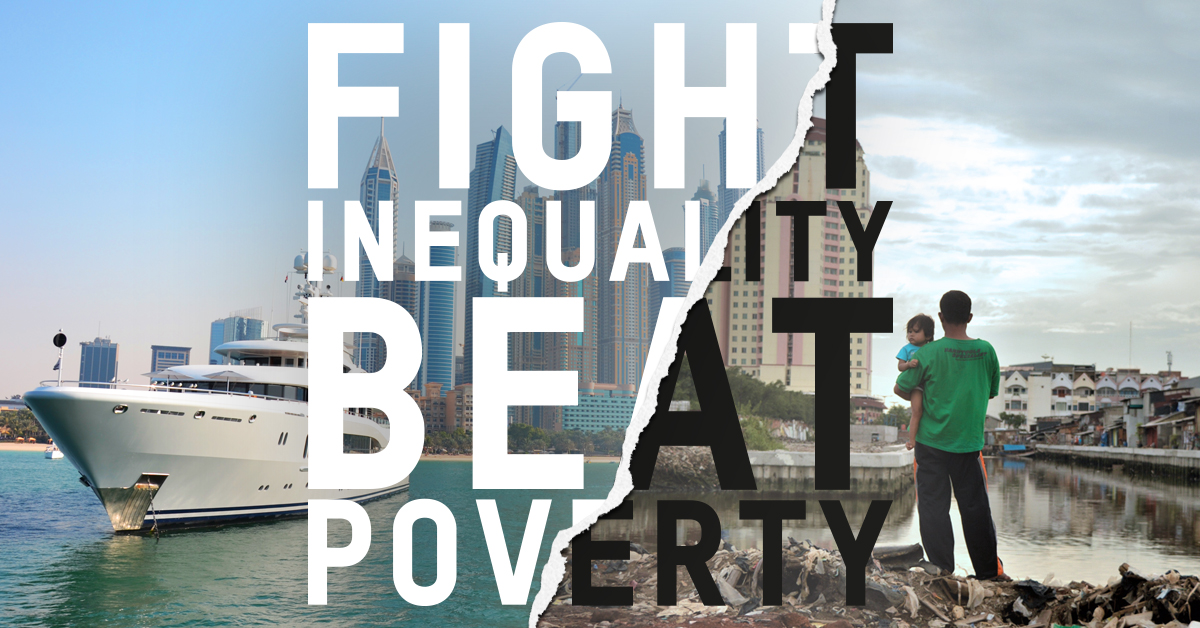 Second, I heard the strategic threat his speech presents for the global poor.  He argued that “regulation is stealth taxation,” and swore that US companies are no longer going to be the victims of unfair deals.   Why is this so bad?  Insisting on “fair and reciprocal trade” isn’t crazy.  Surely it is his job to protect American mercantile interests, right?

His strategy is bad for the poor because of how he wants to get there.  In 2015, a new global strategy was borne in the Sustainable Development Goals, the Addis Ababa Agenda for Action, and the Paris Agreement on climate change.

What was that strategy? It was to restructure the global economy to ensure that power and wealth are distributed in ways that made politics and markets work for the poor.  To make institutions and markets work again, and to do it by making them more stable, transparent, accountable, and inclusive.

Trump’s strategy is profoundly different.   It is transactional, and deal focused.   In his world, the US may cut aid to countries that don’t recognize Jerusalem as Israel’s capital.   President Trump’s deal-maker mindset focuses on a single metric to every strategic challenge.  From this point of view, constancy, transparency, and inclusion are toxic to American interests.

That’s why one of his first acts in office was to repeal transparency requirements for oil and gas corporations who do business with developing country governments.   President Trump and his friends in the oil and gas industry need those deals to be secret if companies are going to win a race to the bottom against those who don’t believe in transparency.

Finally, we should examine the values evident in his speech.  It was heartening to hear his reference to men and women everywhere as the real agents of change (his only gender-related comment in a 30 minute speech).   Compared to some of the language he has used about impoverished peoples, his speech was magnanimous.  And yet, and yet, I found myself shuddering for the marginalized.  When he threatened to shut America’s borders to the needy and instead model our immigration system around the kind of competition that his own family never faced, he failed the values test that made America great to immigrants like me.

There is nothing inherently wrong with the values behind his administration’s current fixation on “transitioning” poor countries from aid to other forms of economic partnership—trade, investment etc.  But when a zero-sum ideology and a transactional strategy inform those values, we will end up with short-term and fear-based foreign policy that will catastrophically damage US efforts to help the poor.

That’s why there was so little solace in today’s speech.