Food isn’t just about water and sunlight. It’s about politics.

During the dark Massachusetts winters, I dream of freshly-picked tomatoes, warm from the sun, sliced thin, drizzled with olive oil and dusted with salt. This year, I put all my hopes on the Paul Robeson heirloom tomato. For five months, I nurtured a few plants from seed—slowly building up their strength with water, supports, and sun. The reward for all my labors? Six small tomatoes. Delicious, but also a reminder that the food we eat is precious and hard won. And as Oxfam gears up to celebrate World Food Day on October 16, a tomato named after a famed civil rights activist blacklisted by McCarthy also reminds us that food isn’t just about water and sunlight. It’s about politics.

You may think that the politics of poverty happens in Washington, DC. But in reality, it happens in your own home, everyday, when you and your family sit down to eat dinner. You know the numbers: around the world, one in seven people face hunger, even though there is enough food produced to feed everyone on Earth. That is political. Here in the U.S., a record number of Americans are using food stamps, almost 46 million people, while our country records its highest ever number of millionaires. That is political. And in 2008, food prices rose precipitously world-wide, sparking riots in more than 25 countries. That is also political. 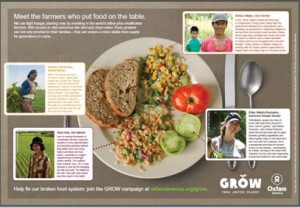 As 33rd annual World Food Day approaches, we’re asking you to do something simple yet powerful, something fun, but undeniably political. Oxfam is asking you to engage your family, friends, campus, or community in a Sunday Dinner Conversation this October 16 about where your food comes from, who cultivates it, and how we can make the food system more just and sustainable.

Order your Sunday Dinner materials today, and we’ll send you a set of resources to support your dinner. These resources include placemats profiling four farmers from around the world, recipe cards from famous foodies and chefs, including Mark Bittman and Giada De Laurentiis, and a discussion guide with questions that will have your guests talking about everything from their grandmother’s pumpkin pie to the famine in East Africa. That is the power of food.

There is no silver bullet that is going to fix our broken food system. That is why Oxfam’s GROW campaign is so multi-faceted: from biofuels and climate change to land grabs and food aid, the global food system will change only if many levers move at the same time. The question is who moves those levers. When Olivier De Schutter, the U.N. Special Rapporteur for the Right to Food, began his second term this May, he shared his impressive list of priorities, but cautioned that the priorities on paper will only be realized if “governments follow up on their pledges to support food security, and…broad-based social movements and human rights defenders all over the world continue to demand change.”

You are that social movement, and you have the power to hold our government accountable on food justice issues. Oxfam wants to be able to tell your Senators and Representatives in Washington that hundreds of people in their state held a Sunday Dinner Conversation. That is political power.

Order your materials today, and use the power of your plate to start a conversation that can help end hunger this World Food Day.