I had a chance to meet Maiko Zulu last week.  He wears frustration and disappointment with his country on his sleeve (and in his music).  Zambia is a country that should be improving economically.  Driven by mining large copper and cobalt reserves, economic growth has been high for the last decade, not less than 5% per year and more than 7% as recently as 2010.  The Economist in 2011 listed Zambia as one of the world’s 10 fastest-growing economies. Since, 2000, average income per capita has grown by more than 40%, lifting Zambia from “low-income country” to a “lower middle-income country.”

But high economic growth and increased average income have not translated into reduced poverty or better conditions for most Zambians.  If Zambia’s national income was a dollar, the poorest 10% of Zambians receive less than $0.02 and the richest 10% control $0.43, making Zambia one of the most unequal countries on earth. Despite good news on growth and income, Zambia is becoming more unequal and poverty is actually rising.

This analysis comes from a very important report released last week, Equity in Extractives, launched by the Africa Progress Panel.  It looks closely at the 20 African resource-rich countries that depend on extractive industries and finds they are performing quite badly in converting their mineral and energy wealth into benefits for the public. A few factoids:

In general, the resource-rich African countries are badly under-performing on basic human development and poverty reduction, despite how much money they’re making.  This chart tells the story: on the left are the countries’ ranking on wealth (actually income), and on the right is their ranking on human development indicators.  That rightward slope means people aren’t getting the health, education, and opportunity that they deserve.  Most resource-rich countries under-perform in every indicator. (Tanzania and Ghana are notable.) 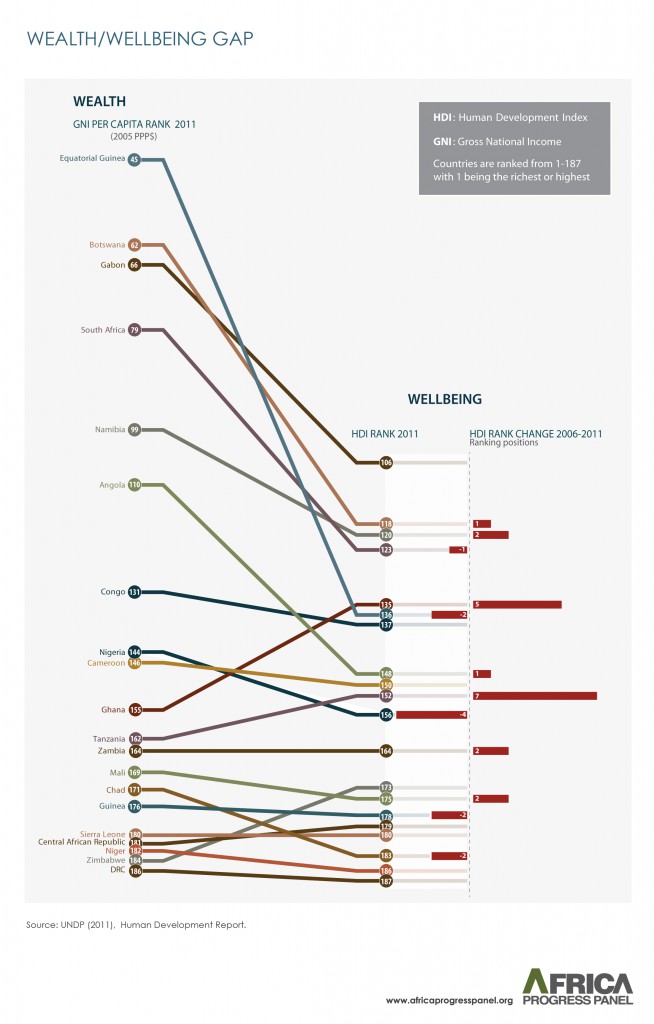 One of the most interesting bits of the report is a forensic analysis that shows that inequality is growing in resource-rich countries, or at least in those the report analyzed.  The data is hard to come by, but seems to show that not only is the economic growth and revenue from oil and mining boom not being shared, but the elite are capturing (stealing?) ever more of the money over time. This means less poverty reduction than there should be, and in some cases more poverty than there was.

More than that, revenues that rightfully belong to the people of these countries are diverted through poor governance, thereby robbing the majority of citizens from the chance to improve their lives via social services and government investment intended to diversify economies. By not widening opportunities away from dependence on extractives and creating more jobs, inequality is not addressed.

The paper is important, and not only if you’re interested in extractive industries.  The analysis provides useful insights and ways to look at the issues that will interest anyone who cares about development and poverty.  The paper is studiously optimistic about the role extractive resources can play in benefiting development and poverty reduction.

Meanwhile, the truth of the inequality of growth is becoming more evident to the public in these countries.  As Maiko Zulu observes above, there is a disconnect between the public interest and those of the plutocrats and oligarchs who are running the countries.

“We can’t speak of economic growth when people are dying of poverty.”

Will disconnect eventually lead to discontent?  That’s a risky proposition that could lead anywhere…

To read the Equity in Extractives report, click here.