The UN General Assembly meetings this week in New York City represent the best hope yet for world leaders to come together on the crisis in Syria. Yesterday President Obama spoke at the General Assembly, saying, “Now, the crisis in Syria, and the destabilization of the region, goes to the heart of broader challenges that the international community must now confront.”

Since the conflict in Syria began more than two years ago, the world’s most powerful leaders have gathered three times in Manhattan at the UNGA. Still, there is no resolution in sight for the millions of Syrians seeking peace. It would be shameful for leaders to walk away from the world’s largest humanitarian crisis while Syrians are crying out for peace.

Last week, I wrote an article for MNSBC entitled, “US, Russia sharing one-legged stool on Syria.” I argued that while the current agreement on Syria bandied about by the United States and Russia addresses the critical issue of chemical weapons, it ignores the widening regional implications of the conflict and the dangers of increased flows of arms into Syria. During my own visit to the region in early September, I was struck by the lack of a strong, coherent attempt by the international community to address the long-term humanitarian needs of Syrians and neighboring countries.

Since the conflict began, more than two million Syrian refugees, half of them children, have sought safe haven in Lebanon, Jordan, Iraq, Egypt, and Turkey. These countries have been generous about opening their borders to asylum seekers, but the increasing demand for basic resources, including schools, hospitals, and municipal services like water, is straining the ability of governments to respond and meet the needs of their own citizens. With thousands of additional refugees expected in the coming months, growing strain on these nations threatens to undermine regional stability. 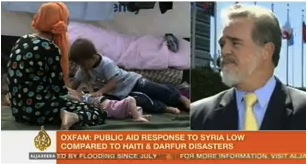 Yesterday the United States committed another $300 million in humanitarian aid to the needs of Syrians. To date, the U.S. government has acted admirably in pledging more than $1.3 billion in humanitarian assistance to Syrians. Oxfam’s own analysis pointed out recently that top donor countries have fallen short of the UN’s massive appeal by more than half. On Monday I spoke about this funding challenge with James Bays of Al Jazeera International. (Click photo to view the footage.) I pointed out that France, Qatar and Russia, among others, are all giving less than half of their fair share.

Clearly, aid is necessary, but aid is not replacement for peace. President Obama said the ‘peace process is stillborn’ for Syria. But for the sake of tens-of-thousands already dead, millions forced from their homes, and many more at risk, world leaders cannot leave meetings this week without a durable pathway to peace.

Renewed commitment from the United States, Russia, and other key players is the best hope yet for a durable political solution in Syria. As this important week meets the halfway point, world leaders must focus on the severity of the crisis inside Syria and do everything in their power to bring this tragedy to a peaceful end.