The task of ending global poverty is up to poor people themselves. But by making some changes, the United States government can do a better job of helping poor people and their governments win the fight.

The United States government has made real progress in the last few years to make its efforts to fight global poverty more effective. President Obama’s new Global Development Policy, released in September, is the centerpiece of these efforts. The new policy—and implementing reforms at USAID—have been rightly celebrated. But much more remains to be done to make the US a true global leader in the fight against poverty.

Today, the Modernizing Foreign Assistance Network—of which Oxfam is a founding member—released its updated agenda for reform. The highlights:

• Reduce waste by fixing old problems: for example, the US government’s outdated model of delivering food aid wastes about $600 million per year;

• Provide clear, accurate data: USAID’s Aid Dashboard (screen shot below) is a great first step—but it needs to be expanded to include more data that will actually help citizens in poor countries demand better results, such as strategy papers and evaluation data; 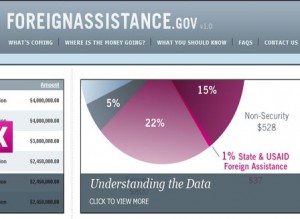 • Get Congress on board with reform: so far, reform measures have not been put in law, meaning that they could be easily changed or gutted. Congress has been eager for reform; the President needs to get their buy-in to protect reform;

• Make sure poor people’s needs come first: we can’t end poverty by making all the decisions in Washington; priorities need to be set by poor people themselves. This means getting rid of earmarks that undermine country priorities, and funding the things that citizens and governments tell us they need, rather than the things that we Americans think they need;

• Keep rebuilding USAID: Administrator Raj Shah has been making great strides to rebuild USAID to serve America well by fighting poverty; Congress needs to back him up with the resources to finish the job.

Taking these steps won’t end global poverty; that task is up to poor people themselves. But by making these changes, the United States can do a better job of helping poor people and their governments win the fight against poverty.