Tomorrow, President Trump will address the global business elite gathering at the World Economic Forum in Davos, Switzerland. In the run-up, his administration has bristled at the notion that the President and his large delegation will be rubbing elbows with the .001%, insisting that the forum isn’t even a haven for elites and is actually the perfect setting for the President to press his policy agenda.

“I don’t think it’s a hangout for globalists,” Treasury Secretary Steven Mnuchin told reporters earlier this month. “I think the idea is that the economic team will go over and talk about the America First economic strategy.”

Whatever the goal might be, the results of a national poll Oxfam commissioned suggest the Administration might consider refocusing its sales pitch a little closer to home.

We surveyed 8,182 people across the United States, and here are five of the most interesting findings:

1. Americans don’t realize how unequal the US economy really is. 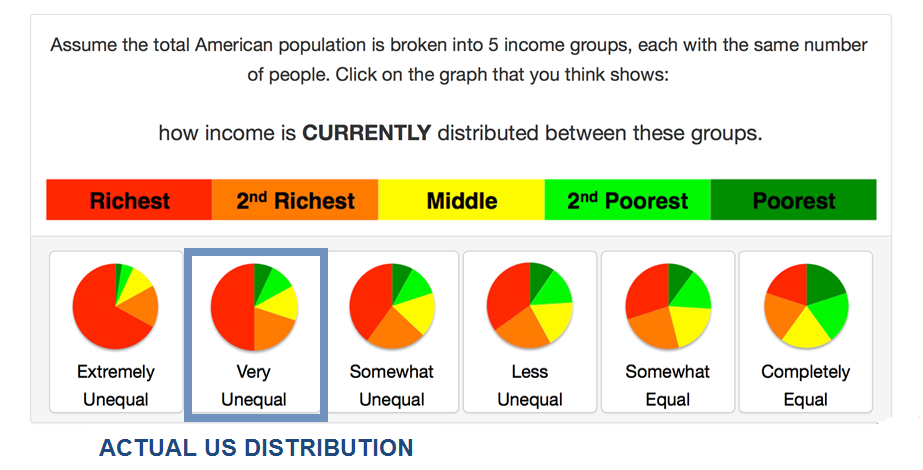 Just 27 percent of people polled accurately picked the true distribution of income in the US (“Very unequal”). Twenty-three percent of respondents think America is more unequal than it really is with almost half (49%) underestimating the problem.

Oxfam’s new report released to coincide with the Davos forum revealed that inequality is on the rise with 82 percent of the wealth created in the last year going to the top 1 percent with the bottom 50 percent getting nothing.

2. A vast majority wants the US economy to be more equal than it is.

Even though nearly half of people surveyed underestimate the extent of inequality, 77 percent say they think income distribution in the US should be more equal than it really is including 75 percent of Republicans and Independents polled.

3. Most Americans believe the government should tackle inequality urgently or very urgently.

Fifty-nine percent of Americans say that the government should tackle income inequality urgently or very urgently. A plurality of Republicans (48%) agrees that this is an urgent or very urgent issue and a majority of independents (51%) and Democrats (77%) do too.

When we asked Americans what the most important thing the US government can do to reduce income inequality, they favor the exact opposite of what this administration and the leaders in Congress have championed. 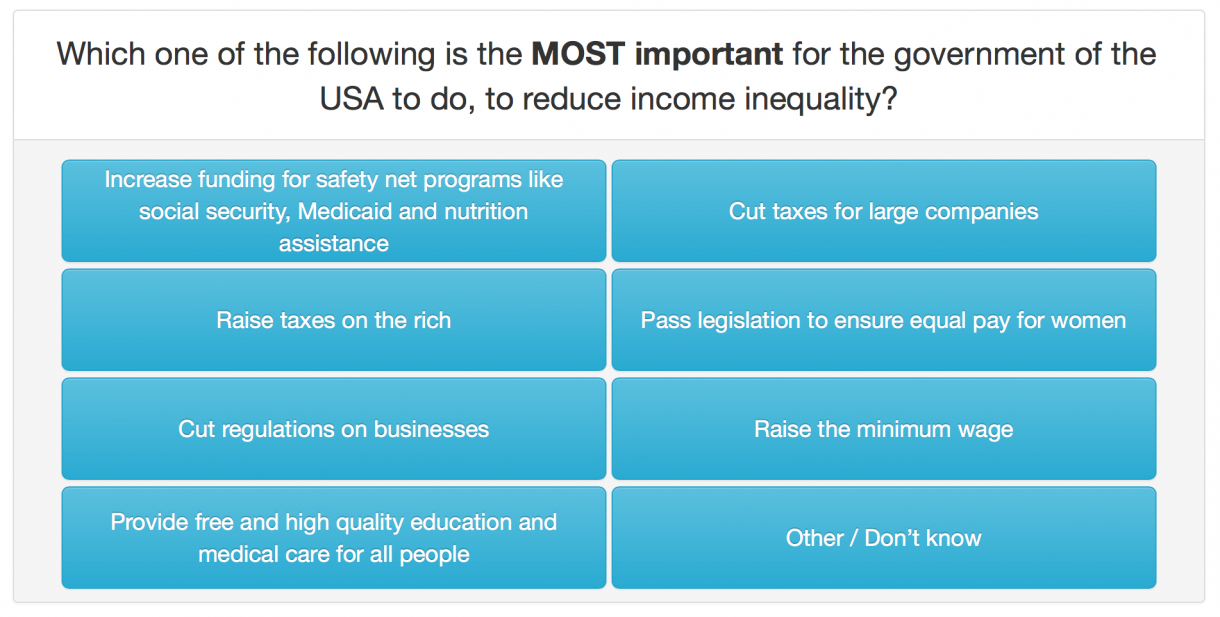 The four most popular priorities for decreasing inequality surveyed were:

It’s no wonder the Trump tax bill, which slashed taxes for the rich and big companies, remains deeply unpopular.

President Trump’s budget slashes funding for public services like health and education not to mention anti-poverty assistance and his tax bill slashes taxes for the wealthy. But Americans across all parties would rather raise taxes for the rich than cut public services.

Presented with a choice between increasing taxes for the 1 percent and cutting public services like health and education, 59 percent of Americans say the prefer tax increases including 50 percent of Republicans, 56 percent of Independents and 75 percent of Democrats.

Taken as a whole, the survey shows that while Americans would want their elected leaders to seek urgent solutions to the growing gap between the rich and poor, they are far from on-board with the President’s agenda.

Oddly, it may be the globalist summit in Davos – where many of the biggest beneficiaries of President Trump’s tax cuts will be gathered – where the President may find his most grateful audience.