Rev. Dr. Clint Schnekloth is a pastor of Good Shepherd Lutheran Church and founder and chairman of the board of Canopy Northwest Arkansas (Canopy NWA). The views expressed in this blog do not reflect the views of Oxfam America.

We’re living in a historically significant moment. Institutions we hold dear and have likely taken for granted are under attack. In times like these it is important to remember the extent to which such institutions serve as cover and refuge for the most vulnerable in our society. I am a pastor, and I have often been told that it’s the role of the church and other faith institutions – not the government – to provide social services to our fellow citizens in need. As much as we would like sheer goodwill to guarantee adequate social services that protect the dignity of all people, the reality is that it’s not enough. The issue is much more structural: NGOs, non-profits, churches, and government agencies work together to care for our neighbor and their needs.

It’s a simple truth—it often takes large institutions balancing one another to ensure the quality of life of vulnerable people. Workers benefit from unions. Corporations make cleaner food when OSHA visits. Democracy thrives when the press is free and creative. And so on.

In my community we began to discover that hundreds, even thousands, of Arkansans wanted to help with refugee resettlement in response to the global refugee crisis, but did not have local and concrete means to do so. Some elected officials had stated opposition to resettlement in the state. As a pastor with a long-standing passion for and commitment to the work of refugee resettlement, I decided we needed to get to work at institution building, so that we could directly resettle refugees in our community while also changing the minds of those officials.

So was born a new non-profit, Canopy NWA – the first organization in many years to directly resettle refugees in the state of Arkansas. Through a long process of community consultations, multiple on the ground visits by Lutheran Immigration and Refugee Service, and dozens of meetings with community leaders and interested volunteer groups, we developed a “brick and mortar” non-profit through which people in our community could do the real work of resettling refugees.

Federal funds provide the bulk of the material support for newly arriving refugees. Volunteers and donations make up the rest. Resettlement in the United States is thus a public-private partnership. Canopy NWA, our local non-profit, receives financial support from individual donors and large grant-giving agencies. But the bulk of our funding comes from the State Department, which finances a significant portion of the U.S. refugee resettlement program.

Since our founding we’ve learned a lot, and we found out how absolutely important the organization was when Trump issued his Executive Order banning travel from seven Muslim-majority nations in January. Prior to Canopy NWA, supporters of refugee resettlement in Northwest Arkansas wouldn’t have had an organization to turn to and focus their energy. But the week after the Executive Order came out, we were the first to organize an interfaith prayer service in partnership with the local synagogue, mosque, and area immigrant and advocacy organizations. That same week, we also hosted a “town hall” gathering to update the community on the impact of the Executive Order. Both times, several hundred people came from all over the region to show their support for refugees. It was an emotional and powerful moment, made possible because Canopy created the space for it to happen.

We believe we are part of a movement; and the spirit of our movement is channeled through Canopy NWA. Yes, we do direct resettlement work, and have resettled over 50 refugees so far this calendar year. But we have also inspired others to join us, like the Students for Refugees at the University of Arkansas. We go to public schools teaching children about refugees. We travel to Washington D.C. to advocate for immigrants and refugees in partnership with Lutheran Immigration and Refugee Service. And each of our refugee families is matched with a co-sponsor team, many of which are organized by area congregations, including teams from interfaith partners like the Islamic Center. 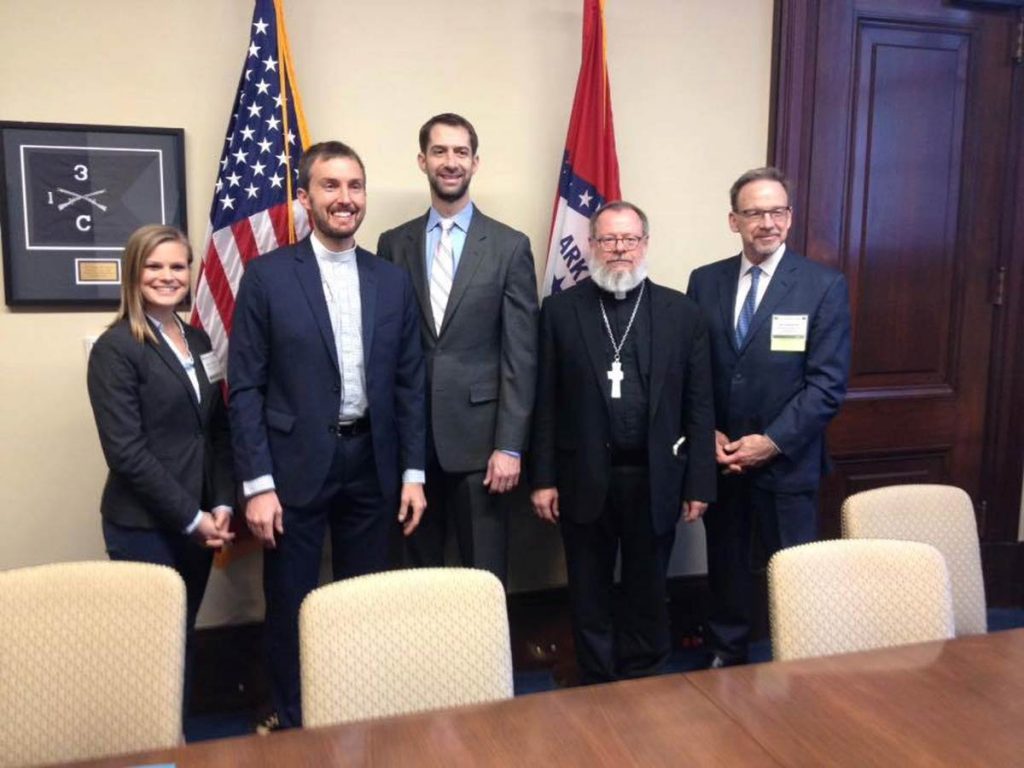 And bit by bit we’re seeing in real time  the benefits of building stable, healthy institutions to serve our neighbors in needs,  while also contributing to the vitality of our community. What I have seen in Northwest Arkansas has been an outpouring of support for the work of refugee resettlement. Our supporters learn from us, grow in generosity by providing material support, and focus their advocacy on behalf of the vulnerable through their participation in our programs.

Movements like the New Poor People’s Campaign , #BlackLivesMatter, and Indivisible are reminding us that effective efforts to address the needs of the poor and vulnerable must start at the local and state levels – both through policymaking and institutions, as well as community-based organizations, faith communities, and local organizing.

Those of us who want to alleviate precarity of all kinds should be strengthening and defining the institutions best placed to help: and supporting inclusive social services funded through state and federal governments. If we do that, we will better alleviate poverty, provide canopy for refugees, and much more. We cannot go it alone, but must learn to be a nation of builders, patriots who see our citizenship as tied up in strengthening institutions that will create the change we wish to see in the world.

Here’s a final story. One of the great by-products of our work resettling refugees has been the opportunity to deepen our friendship with the local mosque. This past Saturday night, one of the prayer leaders invited our family to join them for iftar, the fast-breaking meal that takes place each sundown of Ramadan. So I sat with the imam, and my friend, a refugee from the Congo who our congregation helped resettle, and who now himself preaches at the mosque. In other words, the work we are doing of resettlement is deepening the faith and friendship between Muslims and Lutherans. Both faith traditions recognize the spiritual commitment to care for the refugee in your midst. The United States historically has also shared this commitment, and so it is that together, nation and faith communities and individuals, we remind each other of this common caring cause.