A photo exhibition commissioned by Oxfam in Port au Prince demonstrates what Haitians, living under constant threat of eviction, observe in their day-to-day lives.

“We do not see the people living in camps. We are blind to them, as their existence is now normal.” ~Suzie Castor, Executive Director of Cresfed Haiti

I have not been able to shake these words after something I saw last week. It was an exhibition of photos taken by displaced Haitian people. The photographers themselves live in camps under the constant threat of eviction. The images of three girls squatting around a fire, cooking pots stacked next to a tarpaulin wall, a girl looking almost resigned to the hardships she must face—all demonstrated to me people’s incredible ability to preserve their dignity under very harsh conditions and circumstances.

Titled “Déplacés” (The Displaced), the exhibition was commissioned by Oxfam and designed to spotlight what Haitians themselves observe in their day-to-day lives. The exhibition was launched in Port Au Prince on December 10th to commemorate International Human Rights Day. The photos demonstrated to me the limits of the international community, the lack of capacity of the Government of Haiti, and the seeming irony of International Human Rights Day. 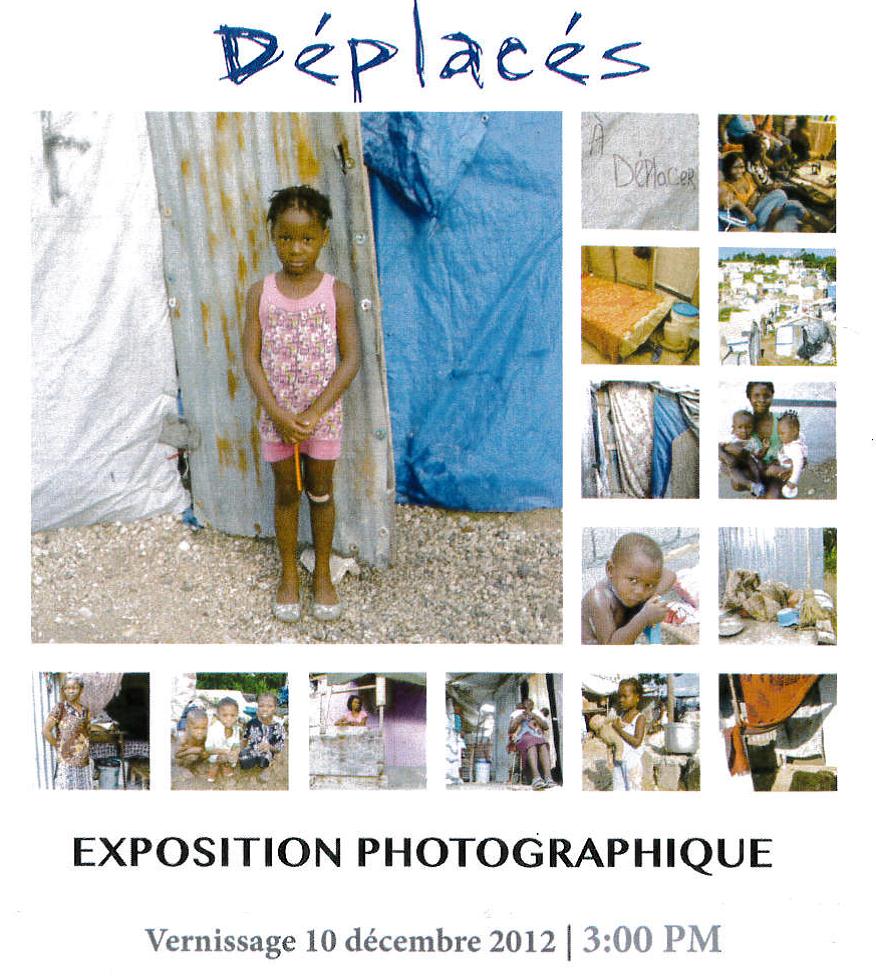 After the earthquake in 2010, there were approximately 1.5 million people living in camps. As we approach the three year anniversary this upcoming January, it is estimated that 357,000 people still live in camps, many under the threat of forced evictions. A recently released Oxfam briefing report, Salt in the Wound, suggests that the decrease was partly due to the implementation of several return and relocation programs, including the Haitian government’s 16/6 Project. This integrated project is aimed at rehabilitating 16 districts of Port-au-Prince with a view to offering the residents there, as well as the displaced people in six associated camps, sustainable housing solutions and improved living conditions. They do this by offering access to basic services and revenue generating activities.

While it is true that the 16/6 project has helped some of the displaced, Oxfam reports that the Government of Haiti’s plan is quite limited because it addresses relocation of IDPs on public land, but not those living on private land. Oxfam’s report highlights another reason for the declining camp populations—forced evictions by land owners.

Land owners’ rights are recognized in the Haitian constitution of 1987 and many landowners, acting as good citizens in the aftermath of the earthquake, allowed camp dwellings on their land. Now almost three years later and with no assurances from the government that they will be compensated, many landowners have begun to threaten, intimidate, and forcibly remove camp residents off their land.

So what happens to these people? Many internally displaced people now live in a constant state of fear of even leaving the camps for work or food, worried that their belongings will be destroyed in their absence. Once evicted from the camps, already vulnerable people face new and more complex problems, with no protection mechanisms from the state.

As we approach the third year commemoration of the Haiti earthquake, the need for a comprehensive durable housing policy designed to address the needs of camp residents and those already evicted remains. Piecemeal projects will not alleviate the long-standing problems of land ownership and housing in Haiti.

The government of Haiti must address the very real threats faced camp residents on private lands as they are completely unprotected. In addition, donors have to be willing to partner with the government and Haitian citizens who understand the complexity of the problems and can offer solutions.

We must all ensure that what the camp residents captured in their photographs does not become the new normal in Haiti.