Failure to act will worsen the divide between poor and rich countries.

Ebola looms like an ominous cloud over western Africa. For me, it’s a stark reminder of the extremely unequal world we live in, which is becoming worse instead of better.

Inequality has been in the news and on the talking points of elected officials in recent years. The financial crisis spurred attention to the increasing concentration of wealth among the one percent, and the falling prosperity of practically everyone else.

US citizens often think of inequality in national terms, as we consider the haves and have-nots within our own borders, and where we fit in on the spectrum. We also compare ourselves to global fat cats; the jet setting moguls among the burgeoning billionaire class. People around the world were dismayed when my colleague Ricardo Fuentes and I told the world that the 85 richest people on the planet own the same amount of wealth as the bottom half of humanity. (And hopefully those watching Russell Brand on David Letterman last week were too.)

Unfortunately, ordinary citizens living in much of the west spend little time considering the enormous inequality between theirs and the world’s poorest countries.

The chart below illustrates the incredible economic divide between rich and poor countries. However, this divide is about more than mere income and wealth differences. This divide also entails a world of extreme inequalities in terms of the quality of life people experience. The only criteria for whether you may live a relatively safe and healthful life, instead of one threatened by easy to cure diseases and lack of opportunity, is the lottery of where, and to whom, you’re born. 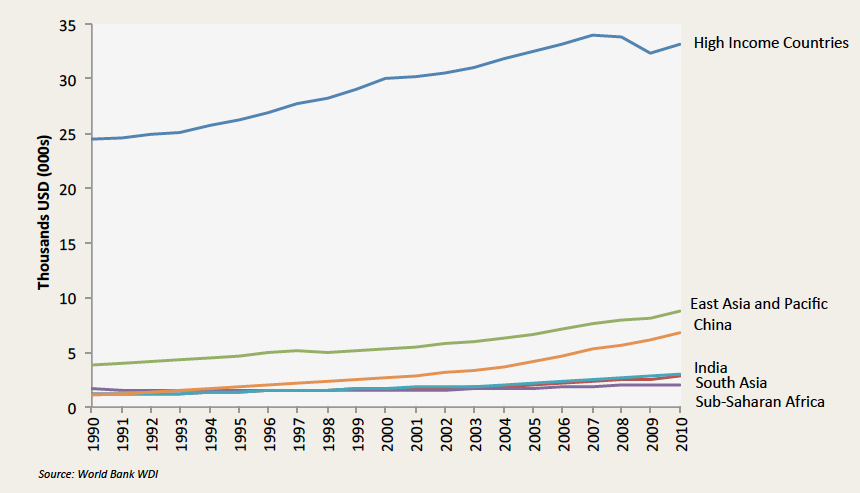 The Ebola epidemic is putting this ‘inequality of geography’ into sharp relief.

Consider that the alarming spread of the disease in Western Africa poses little threat to people living in rich countries (despite how some media outlets might incite you to react to Ebola). This is because public health systems are magnitudes better resourced and capable to inhibit Ebola’s proliferation here. In fact, Ebola isn’t even a highly communicative disease (an infected person only transmits it to one or two people). In this respect, the slow response to Ebola and the unwillingness to help by rich country governments is appalling. Swift, concerted effort could quickly contain this crisis, and save the lives of potentially hundreds of thousands.

Failure to act will also worsen inequality between poor and rich countries. Raymond Gilpin on the African Arguments blog writes,

“One of the lessons of this Ebola outbreak is that countries that ignore pronounced inequality do so at their peril. Not only are such societies more fractured and unstable, they are also less resilient to socio-economic shocks.”

The divide between today’s Ebola-infected countries and those with the capacity to stomp out its spread is enormous. Countries facing the Ebola crisis already rank at the bottom of the inequality adjusted Human Development Index (a measure of human development based on country level inequalities in health, education and income). Of 144 countries on the ranking, Liberia ranks at 135, Guinea at 138, and Sierra Leone 143. The slow response by richer countries threatens to make inequality worse both within these countries, and between them and rich countries.

While we hear on the news the sheer number of lives threatened and lost, what we don’t hear as much about is the ripple effect across economies. Farmers’ fields are being left abandoned, while shops and businesses are forced to close. Livelihoods and incomes are being lost, economic growth is hampered, and the persistent great divide between the world’s poor and rich is made even worse.