What will Adeso, a USAID implementing partner, be able to find out about their own programming from foreignassistance.gov?

This post is the second in a series on user perspectives on US aid transparency data.

“We are only the facilitators for change, the communities are the drivers,” explained Degan Ali, Adeso’s Executive Director when she visited Oxfam last week. “We are grounded in our work that started over 20 years ago, in one town, Badhan, Somalia.”

Adeso is a humanitarian and development organization that has emerged to change the way people think about and deliver aid in Africa—that is, from within. Formerly known as Horn Relief, Adeso has expanded from one community to other parts of Somalia, South Sudan and Kenya.

As a current implementing partner of US foreign aid in the Horn of Africa, Ali agreed to sit down with me to take a look at foreignassistance.gov, where USAID, MCC, and the Treasury Department released new data last month. What would she be able to find out about her own organization’s programming there?

Ali has over a decade of experience managing food security, livelihoods, cash transfers, anti-trafficking, and water, sanitation, and hygiene programs. Before we began, she explained how donors can best support local actors as agents of change in their communities. She also explained that transparency is an important part of the participatory learning and action approach that Adeso uses.

“It’s not the easiest way to involve people at all stages, providing full information, but in our experience, it’s the best,” says Ali. “Our programs operate at a different pace, and real community ownership emerges.”

We began with a glance at USAID’s 2013 financial transactions in the countries where Adeso works.

“Ok, why is this data relevant to me?” Ali first inquired. “It can be overkill. Too much data and useful data are not the same thing. Why are they giving this?” So from there, I suggested we look into the transaction details.

As Ali scrolled and clicked, she said, “From this I cannot tell which parts of the country are served, or even the objectives of the projects or the local organizations that are doing the real work on the ground.” She went on, “There’s no programmatic or beneficiary data, let alone approach or intended or achieved results. Not even what type of contracts.

“Ultimately, links to the contracts, grant awards, proposals, and reports are what’s needed to make this useful to me,” Ali suggested.

Like Albert Kan-Dapaah, Ali mentioned noticeable gaps in the financial transactions data, such as vendor names and a large unexplained difference between amounts obligated and spent, which was $65 million in Kenya for example. Ali also lamented the lack of information about the competitiveness of bidding processes, which is a big issue in Somalia where so many contracts are awarded through direct appropriation.

“Right now this is like looking at someone’s bank book and trying to tell what they do for a living,” she said.

We then looked into one of Adeso’s specific projects that were listed—a Feed the Future resiliency project with pastoralists in Kenya, of which Adeso is the lead organization, having one of the few such large awards to African organizations. (See screenshot below.)

Ali noticed it’s interesting that Adeso was listed as a “non-US” non-profit. Despite their request to channel these awards directly to Adeso Kenya, USAID had insisted on sending funds through Adeso US (the organization maintains legal nonprofit status in the US and UK). She wondered if this internal classification was used to help meet USAID Forward’s 2015 target of 30% of USAID funds delivered to local partners. If so, this would be disappointing since Adeso Kenya, an established office with a staff of over 45 people, had to jump through an additional bureaucratic hoop to receive the funds they would ultimately manage. 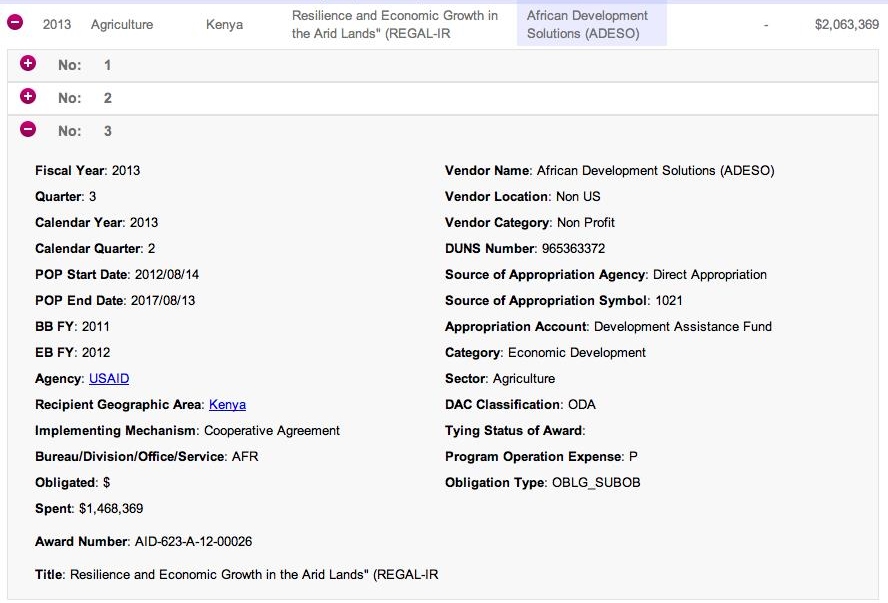 Last week the Department of State released a Foreign Assistance Dashboard Usability Test Report, after holding sessions in Washington DC in April with participants from US government agencies and international NGOs. According to the State Department, “results of the study revealed that most difficulties were experienced with the Data page, where participants needed definitions on filter terms, more filters, and easier page navigation.” More “filters,” or deeper and more easily consumable information, is definitely what Degan Ali would like to see.

“All this begs the question of audience. Who do they want to know where the money is going? For the average person in Kenya, or even a government official, this is jibberish.”

Transparency is important to Ali because she has experienced first-hand the assumptions made about African non-profits, that is, that most are corrupt. She shared that recently after a case of “diversion” of funds was uncovered with a large international NGO in South Somalia, actions were not taken and the organization received more donor contracts.

“Transparency and accountability have to go two ways. Unfortunately the current situation is that donors would put their heads in the sand and punish local organizations, rather than report to their taxpayers the reality of the situation.”

New bi-partisan legislation—the Foreign Aid Transparency Act of 2013—would open the books on US foreign aid. More transparency will enable people like Degan Ali to hold their governments accountable for how they invest US resources. Learn more and contact your representatives here.

Stay tuned to Politics of Poverty for more from this series!