Vulnerable populations feel the most harm from extreme weather events.

As hurricanes are flooding and battering coastal regions in the Gulf Coast and Atlantic, millions are scrambling to survive—and soon to recover and rebuild. For years, Oxfam has been studying how the “hazards of place” pose heightened dangers to the most vulnerable.

When a population is both socially vulnerable and especially exposed to climate hazards, the result is a wake of rubble and broken dreams. As climate change exacerbates the impact of environmental events, millions of people are stranded in harm’s way, and the most vulnerable are feeling disproportionate risk and damage.

However, we’re currently witnessing a scale of destruction and devastation that is new and terrifying. The blows are more ferocious; and the vulnerable people in harm’s way are feeling the impact most acutely.

The last couple weeks alone have seen a series of devastating climate disasters in various parts of the world. The hurricanes close to home – Harvey, Irma, and possibly Jose – are part of a growing, global trend of more intense and destructive storm cycles. From Houston to Haiti to Mumbai, millions of homes are underwater or blown over, and millions of people are homeless and impoverished.

At Oxfam, we saw the vulnerable suffering the most in the face of Katrina: older people unable to leave their homes, suffering from health problems as medications lost refrigeration; ill and injured trapped in hospitals; working families waiting on their checks at the end of the month, lacking the cash to fill the tank and hit the road; immigrants who couldn’t find information about the incoming storm or shelters. And the recovery was even more inequitable, as tenants had no way to recover losses; homeowners without insurance lost their houses; workers scrambled to find employment, while labor protections were relaxed and conditions worsened.

As we face a future with enhanced risks, it’s critical to face the reality of who bears the burden of our changing climate, and to prepare and respond appropriately.

Why are the storms so fierce?

At the same time, changes in patterns of human settlements – for example, paving over wetlands around Houston – reduces natural resources to absorb impacts of storms.

The evidence is overwhelming, and the events are diverse: water, wind, drought, temperature extremes. Currently, we see an average of 400 “extreme weather events” every year.

And so the toll of these changes begins to rise, in some cases dramatically.

What does it mean to be socially vulnerable to climate hazards?

The challenges of social vulnerability can quickly turn life threatening in the immediate face of a climate disaster. People may lack enough money to find transportation (private or public), or they may have mobility problems, or their housing may be fragile, or the loss of power may leave them without vital refrigeration or methods of communication. Many are one big storm away from homelessness, unemployment, hunger, injury, and/or loss of life.

When a climate disaster strikes, it hammers a community: water floods in; high winds topple power lines, trees, and structures; drought dries-up crops. While social variables such as income and age do not determine who will be hit by a natural disaster, they do determine a population’s ability to prepare, respond, and recover when disaster strikes.

Oxfam worked with the Hazards and Vulnerability Research Institute (HVRI) to develop a series of Social Vulnerability maps for the southeastern states in the US. These maps measure and illustrate the convergence of social vulnerability factors (such as economic standing and age, among others) and four environmental hazards: flooding, hurricane force winds, sea-level rise, and drought.

Below is a brief outline of the maps and findings. 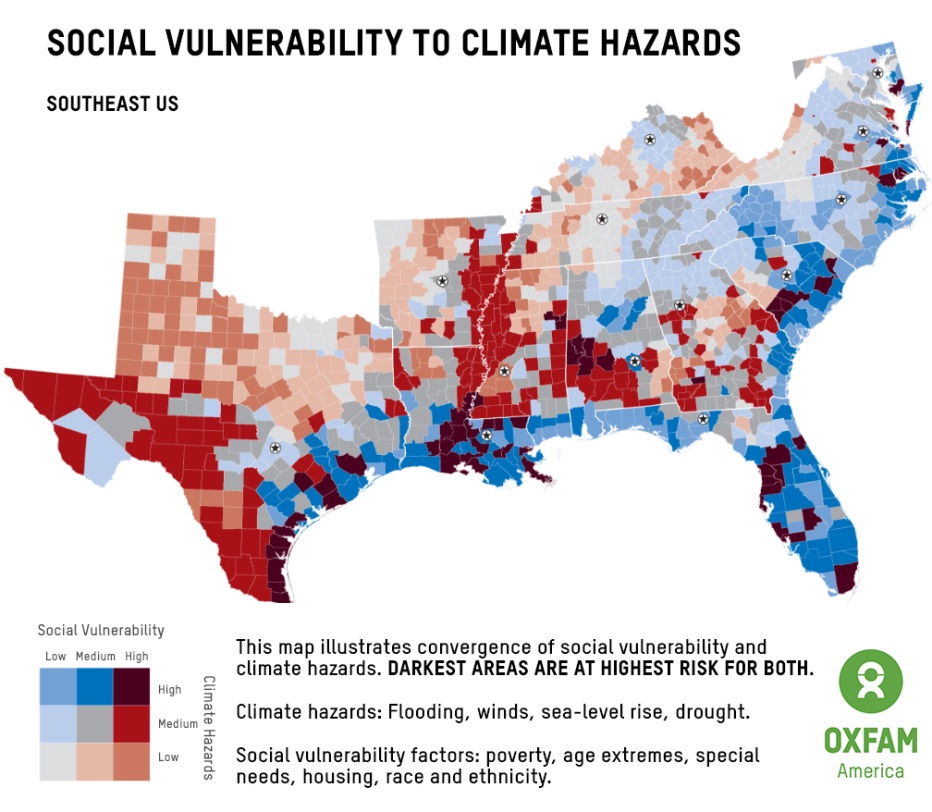 The Social Vulnerability Index from HVRI is a quantitative measure of vulnerability. Factors include the following.

As the water recedes and the winds die down, the path of destruction is revealed – and the recovery work begins. For many, it’s a long, slow road back to secure homes, regular work, and safety.

As the emergency funds and efforts flow into these areas, it’s incumbent on us to make sure the programs reach those who need it most.