If the lame-duck Congress cuts America’s life-saving aid programs, millions of poor and hungry people could see their futures go down the drain.

With the 2012 election over, the lame-duck Congress is diving back into its unfinished business. First on their to-do list: funding the federal government for next year, including America’s efforts to fight global poverty and save lives. Will Congress protect life-saving aid? Or will Congress duck fiscal reality and common sense as they waddle through the budget gridlock? 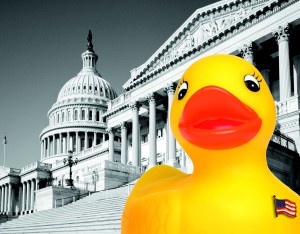 Aid to fight poverty and help out in disasters is one of America’s proudest traditions—and smartest investments. For decades, American aid has helped people escape poverty and survive war and hunger.  US aid has helped end polio, fuel the Green Revolution, and rebuild shattered economies. It has also helped build some of America’s strongest allies, like Turkey, South Korea, and Poland. When you look at that record, and then consider the cost—less than one percent of the federal budget—your elected representatives in Washington would have to be quackers to vote to cut aid.

And yet aid, despite this legacy of success, global poverty assistance always seems to end up the ugly duckling of the federal budget. Perhaps it is because aid has a complicated story to tell. Of course aid doesn’t lift people or countries out of poverty—people do that themselves.

People like Cyiza Eliab in Rwanda who started a farm cooperative with his neighbors to grow corn and beans to help feed their families and earn an income. With a little help for USAID’s Feed the Future program, Cyiza‘s cooperative built a storage shed where corn is hung to dry, which reduced rot and increased profits.  With the additional income, Cyiza can educate his children and brighten their futures.

Or Kim Nay Heang, a 57-year-old entrepreneur from Cambodia who got USAID support to transform her household fishpond into a profitable business venture. With this income, Heang helped her family survive a dramatic spike in food prices—and provided an education for her five grandchildren.

Or Jose Ordoñez, a Honduran corn farmer who started to plant more profitable crops, like papaya, and is now able to transport the fruits to a market where they fetch a good price, travelling on rural roads constructed using U.S. assistance. He is now earning enough to secure his family’s future.

Farmers, entrepreneurs, nurses, teachers, watchdogs who call out corruption and abuse—these are America’s partners in the fight against global poverty. For decades, assistance from the US government has been there to help. Sure, we don’t always do it as well as we could. But when it pays off, we get a world that is better, safer, and more prosperous for everyone.

But telling how aid works is hard; holding up the example of money going to shiftless foreigners is easy. No wonder some politicians try to feather their own nests by saying aid is a waste. You can expect a flock of critics to peck holes in the foreign aid budget over the next few weeks. But don’t fall for it. Don’t let them wash poor people—or America’s values and interests—down the drain. Stand up and protect America’s poverty-fighting and life-saving aid.