A global letter calls on the US Securities and Exchange Commission to uphold Dodd-Frank transparency provisions.

Jana Morgan is the US National Coordinator for Publish What You Pay.

Today over 500 civil society organizations from 40 countries submitted a letter to Securities and Exchange Commission (SEC) Chair Mary Jo White, calling on the SEC to promptly re-issue a strong implementing rule for the landmark oil, gas, and mining payment disclosure provision of the 2010 Dodd-Frank Act, Section 1504. 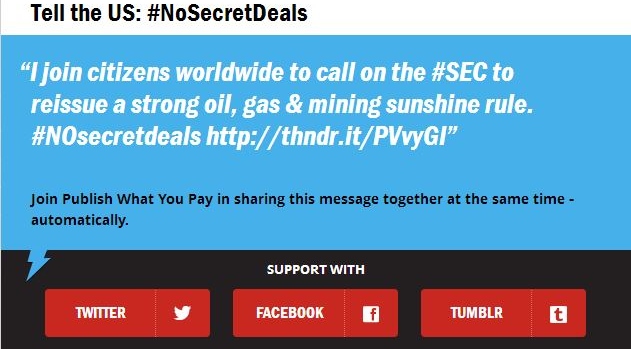 In doing so, the 544 civil society organization (CSO) signatories underscored the reality that public disclosure of payments made to governments, at the project level, without any country exemptions, has become the global standard. Indeed, in the two years since the SEC released its 2012 rule, disclosure provisions largely modeled on Section 1504 of Dodd-Frank have been taken up by the EU’s 28 member states and Norway, with Canada committing to have legislation in place by June 2015.

While the sheer number of CSOs calling on the SEC to promptly re-issue a strong rule for Section 1504 speaks volumes, equally noteworthy is their diversity. CSOs operating in Africa, Asia, Eurasia, Latin America, and the Middle East are represented. And while the primary missions of all CSO signatories are too numerous to list here, they include the promotion of human rights, development, education, women’s rights, workers’ rights, veterans’ rights, and religious freedom.

In joining together to call on the SEC to re-release a strong rule, these 544 civil society organizations have united behind a single message: for too long, revenues from natural resources have been used to enrich a tiny elite, while widespread poverty continues unabated.

CSO signatories from the Democratic Republic of Congo are painfully aware of the consequences of opacity in the extractives sector in their country. In a recent report, the Africa Progress Panel assessed five concessions issued by the DRC between 2010 and 2012 and estimated that these assets were underpriced by $1.36 billion. To put this number in context, the sum of the country’s education and health budgets over the same period was just under $700 million. Meanwhile, human development indicators in DRC lag behind all but one country.

Equally cognizant of the need for transparency in the extractives sector are CSO signatories from Gabon, an oil-rich country where much of the population fails to share in the wealth. Meanwhile, President Ali Bongo Ondimba shuttles millions of dollars out of the country to his estranged wife, former reality TV star Inge Bongo. Gabon is also an example of where a voluntary approach to disclosing payments – the Extractive Industries Transparency Initiative – has failed.

Today’s grassroots call for transparency is echoed in the demand made by powerful investment firms worth $5.6 trillion last August to SEC Chair White to quickly re-issue a strong rule. The interests of investors and grassroots activists in getting more information about oil, gas and mining projects are well aligned.

I hope the SEC hears all their voices, acknowledges the global transparency standard that has developed, and promptly re-releases a strong implementing rule for Section 1504.