While the recent string of hurricanes hammered millions of people in the US, it struck the hardest blow on the most vulnerable. Oxfam helps raise the voices of these populations, and led a delegation of leaders from Houston and Louisiana to Capitol Hill to speak about the impact of Harvey.

It takes a long time for 33 trillion gallons of water to recede—and it takes much longer to repair the damage. People in counties along the Gulf Coast of Texas are still “mucking and gutting” their homes weeks after Hurricane Harvey hit, says Jenifer Wagley, Deputy Director of Avenue Community Development Corporation (Avenue CDC) in Houston, Texas.  Homes, schools, businesses, streets were inundated over several days, in some areas by well over eight feet of water.

“Many people didn’t want to do it right away, because they feared that the Federal Emergency Management Agency (FEMA) would deny help. But the longer you wait, the more dangerous it gets as the mold grows. It’s hot and tropical here—it’s 90 degrees today—and the mold causes all kinds of problems, such as asthma attacks,” Wagley notes.

Recently, Wagley joined a delegation of local leaders from Texas and Louisiana to travel to Washington, DC, where they spoke up about what it’s really like to cope with the impact of a major climate disaster when your household “is already on the cusp of disaster.”

In visits to Congressional offices, the Department of Housing and Urban Development (HUD), and FEMA, Oxfam worked with the delegation to urge policymakers to:

In addition to Wagley, the delegation included Amanda Timm, Executive Director of the Local Initiatives Support Corporation, and Kathy Payton, CEO of Fifth Ward CRC from Houston;  Andreanecia Morris, President and Chairwoman of the Greater New Orleans Housing Alliance and Flozell Daniels, Jr., President and CEO of the Foundation for Louisiana from Louisiana.

Each of these leaders possesses a thorough understanding of federal policies and funds that affect housing and community development initiatives. Their deep knowledge coupled with their on-the-ground experience meant that they were able to engage in technical conversations about the minutiae of government programs with Congressional staff. Ms. Morris and Mr. Daniels provided significant insight into the successes – and challenges – of a number of federal programs that were implemented in Louisiana post-Katrina, while the Houston members of the delegation laid out their vision for a recovery process that, with the right funding, would ensure vulnerable Texans are not neglected.

The delegation met with the staff of several members of Congress who were only recently assigned to work on disaster recovery; and their wealth of experience was clearly invaluable. The Houston leaders were able to meet in person with two of their elected representatives, Congressman Al Green and Congressman Gene Green, who have both been effective political allies. The meetings allowed them to reconnect and trade information about current efforts to revitalize their hometown. 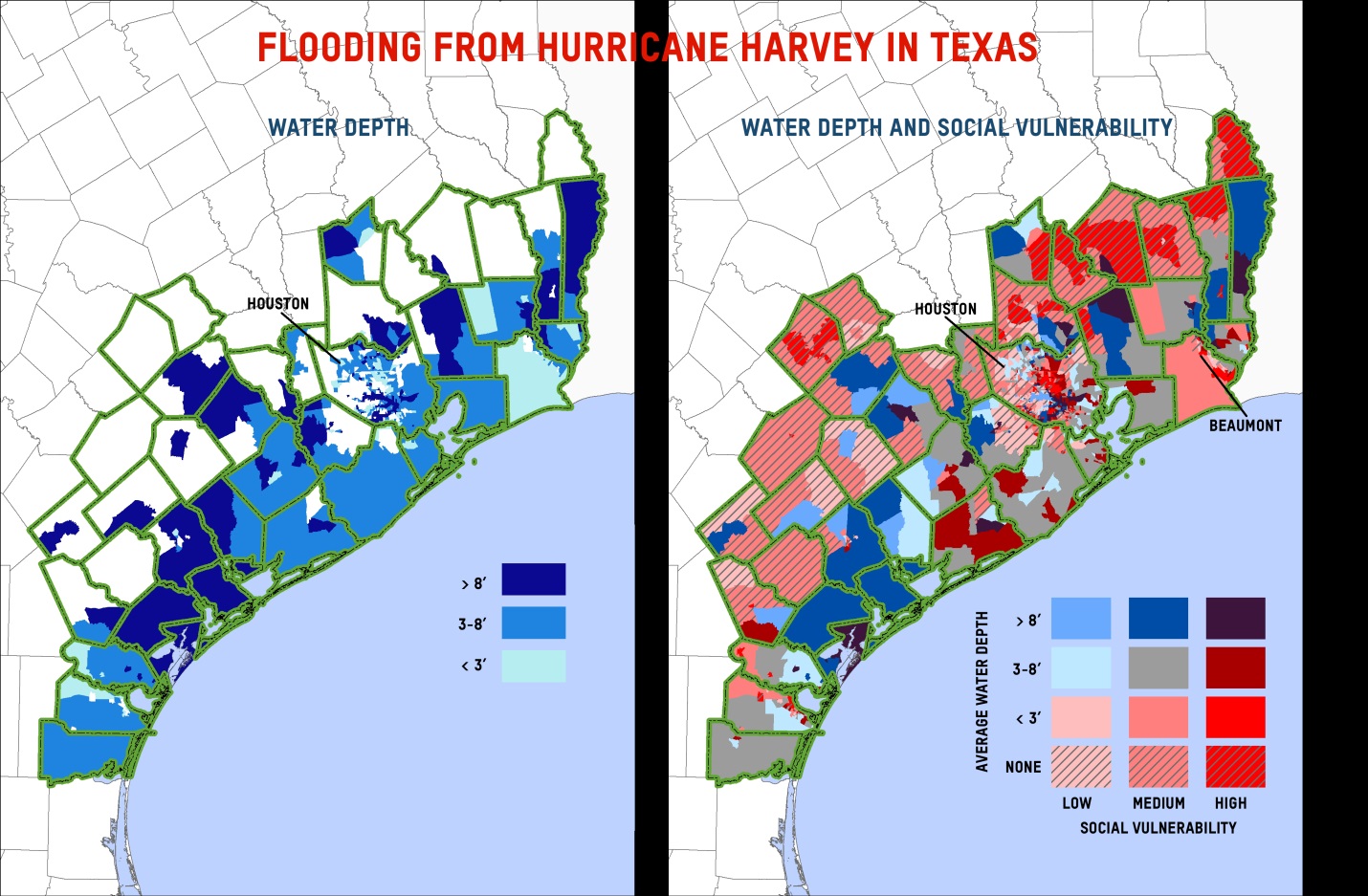 Oxfam presented a new report, Hurricane Harvey and Equitable Recovery, which follows up on our social vulnerability maps of the Southeastern US (Coping with Disaster and Exposed). The new interactive maps explore the intersection of flooding and wind, and social vulnerability factors, down to the census tract level.

This resource was received with gratitude and significant interest by congresspeople and staff from both sides of the aisle. “Because Oxfam is nonpartisan,” says Michelle Sternthal, Senior Domestic Policy Advisor for Oxfam, “It’s important to us that we provide this kind of data alongside our advocacy work. These maps allow people from a variety of backgrounds to focus on what’s important – the impact of hurricane Harvey on socially vulnerable communities. This can lead to fruitful cooperation.”

“Houston is really a tale of two cities now,” notes Wagley. “If you land in the city as a tourist, you wouldn’t be able to tell that something had happened. The main highway (I-10) is open, and things look normal. But when you get to the level of the neighborhood, you can see the scale of the disaster. The most vulnerable really are being left behind. 45 percent of the households affected are low income, and that’s why the maps are so powerful. They’re the beautiful tool we needed to show what’s going on. They really enable you to see the localities.”

Houston is also home to over half a million undocumented immigrants, who are reeling in the aftermath of the storm. “As far we can tell, many of them are hiding and suffering in silence. Anyone with a citizen child can apply for help from the federal government, but they’re worried about giving over all their information.”

Wagley notes that “Houston already had a crisis of affordable housing, and this storm turned it into a catastrophe. In Harris County, there are 1.6 million people and no inclusionary zoning. There were 306,000 households with ‘severe housing problems,’ meaning they either paid over 50 percent of their income for housing, or they were living in substandard conditions.”

The storm also left a wake of toxic debris that is posing a public health problem. “There are not enough trucks to pick it up, and not enough landfill to hold it. The health crisis continues to escalate.”

Wagley and her fellow advocates will be critical to ensuring recovery efforts in Texas and Louisiana take these factors into account – and that congressional representatives  and other federal leaders stay engaged – so the most vulnerable and underserved community members are not left even further behind in the wake of the storm.