When Hurricane Maria tore through Puerto Rico on September 20, 2017, it did more than rip off roofs and topple power lines: It destabilized every aspect of life for more than three million residents. As the new hurricane season begins on June 1, we all want to know: Where are the billions in federal money that can help rebuild and heal the island?

When Nayda Bobonis talks about the legacy of Hurricane Maria on communities across Puerto Rico, the word “security” pops up a lot. To this day, says Bobonis (an attorney and community leader in one of eight hard-scrabble barrios along a central canal in San Juan), people experience—and feel— insecurity in many aspects of their lives. And as the hurricane season officially begins on June 1, the sense of foreboding hangs over the island like a dark cloud.

When will the lights go out? “The infrastructure is not prepared at all,” she says, of the still-fragile power grid. After Maria knocked out power in September 2017, the lights came back on very slowly across the island – in some places, it took months. “We still have blackouts all the time. Just a week ago, we had one that lasted five hours or so. ”

And when the power goes, the water goes. And the air conditioning, refrigerator, and internet. And the lights—which, she says, creates the “perfect situation” for crime.

Will houses ever be made whole? The Governor of Puerto Rico estimates that 30,000 houses still have blue tarps for roofs. After FEMA denied more than half of all individual claims for assistance, Bobonis says, people would pick up pieces of material from the street—wood or aluminum—and try to repair their roofs or structures on their own. “Any big wind would just rip off those repaired pieces,” she notes.

Will business ever thrive again, and offer job opportunities? While the economy on the island had been struggling for some time, the hurricane dealt a deadly blow to many businesses. “So many businesses stood silent for weeks without power, eventually they couldn’t make it; they never opened again.” Now, many of the abandoned structures are open to criminal activities. Bobonis notes that federal recovery dollars that fund jobs should put locals to work. “A lot of companies came from the mainland to do the work of fixing things. We have people who are prepared and can do the job.”

Will people ever feel secure again? Bobonis cites the impact that the disasters had on people. In her community, the canal flooded and the water in some houses was six feet high, and dragged in huge amounts of mud that overwhelmed and killed people. “We still have so many mental health issues,” she notes. “Suicide rates have gone up, people are struggling with anxiety.” 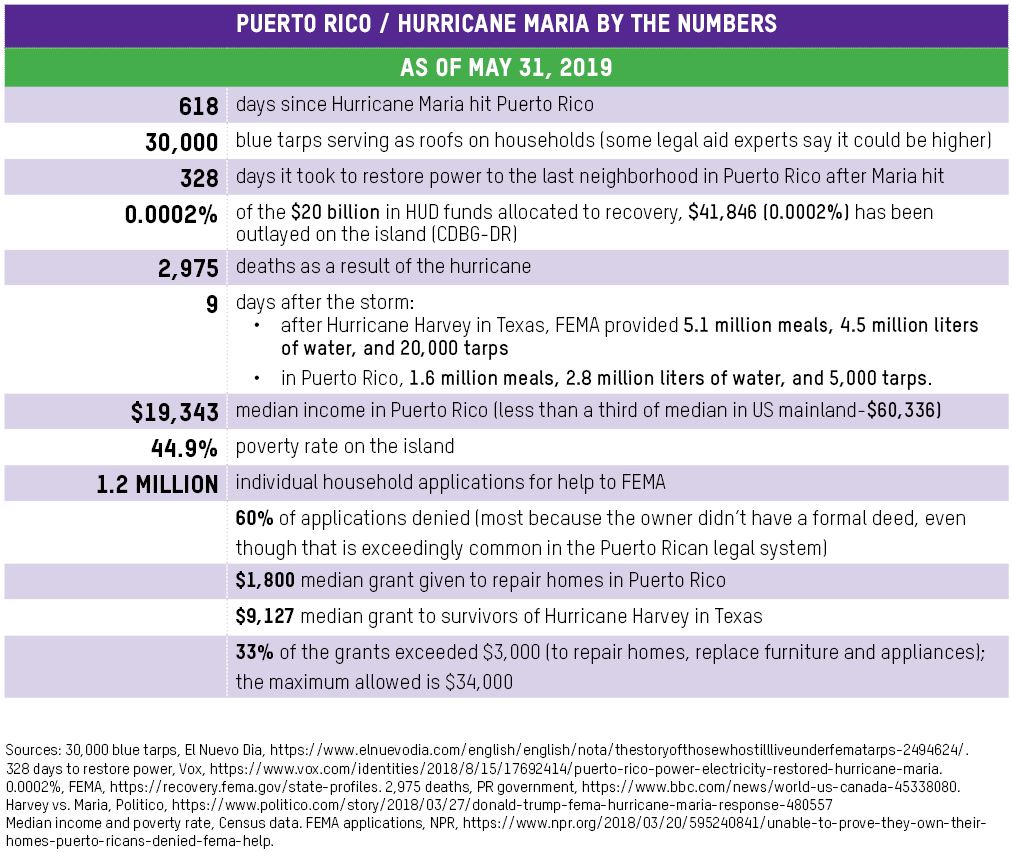 Waiting on recovery dollars to rebuild

Bobonis notes that nearly two years after Maria, the island is still waiting on billions of dollars that have been allocated, but not delivered. “We have to do things the government hasn’t done, but we need money. It’s so important that funds come to the people who need them.”

Many experts and organizations worry that when the money does come, it won’t go to the right places. Oxfam and others are advocating on Capitol Hill in the upcoming week about this issue (among others): Solicit local voices, empower local people and communities. This is the only path to equitable recovery.

“Everything the government does, there’s the danger that it gets lost in translation,” says Bobonis. “We’re worried that the funding won’t go to the communities that need help the most. Communities know best what people need: we want the money to repair structures, and to build community centers, and to mitigate risks.”

One of the most acute threats to many communities is the remapping of flood zones—which compels the government to move people (rather than mitigate risks); and then opens that land (often on the coast) to outside developers. “So many of us have spent our lives in this community, we can’t imagine moving. Our roots are in one place, that can’t change from one day to another. But the government wants the easy way; we want them to help us stay, and mitigate risks.”

In fact, billions of dollars have been allocated to help Puerto Rico rebuild: over $20 billion from HUD and the Army Corps of Engineers has been approved, and is sitting in coffers.

So why isn’t it being delivered to the island?

The bottom line appears to be what we’ve known all along: The Trump administration considers Puerto Ricans to be second-class citizens. When the President threw rolls of paper towels at a crowd who’d just gone through the devastation of Hurricane Maria, he showed what he really thought: Puerto Ricans don’t count as much as citizens of the mainland—and it’s up to them to clean up their mess.

And he’s been doubling down on that perspective since.

Puerto Rico has been given more money by Congress for Hurricane Disaster Relief, 91 Billion Dollars, than any State in the history of the U.S. As an example, Florida got $12 Billion & Texas $39 Billion for their monster hurricanes. Now the Democrats are saying NO Relief to……

He’s repeated the numbers in this tweet several times—even though it’s false on many levels. First, the amount of aid committed totals $41 billion (not $91 billion); and so far, Puerto Rico has received only $11 billion in emergency funds. Second, the President has proposed taking from the money committed and using it for other projects (such as the wall on the southern border). And finally, almost none of the $21 billion in funds that have been committed through HUD has actually reached the island.

While Puerto Rico is still working hard to recover, the truth is that it could have been much worse. The communities on the island have shown extraordinary resilience, hard work, and care for each other. The people have done so much to support each other through the long months without power and water, and through the recent months waiting on the recovery money.

It’s time for the government to support these communities with the money and respect they deserve.

Next week, Oxfam will be hosting a delegation of local leaders from Puerto Rico on Capitol Hill. They will bring their concerns from the island directly to agencies and Members of Congress, and will urge them to release the funds, and to empower local communities to handle them and make best use of them.