The leadership of the House and Senate joined together with President Trump today to release a new tax cut plan they aim to pass before the end of 2017. In short, it is bad.

The proposal is a blueprint for increasing inequality here in the US and around the world.  Here are a few key reasons why:

Right now large American companies use offshore tax havens and other complex schemes to avoid nearly $135 billion in taxes every year. The top 50 US companies alone have more than $1.6 stashed offshore. But instead of reforming the tax code so these companies must pay what they owe, the plan actually gets rid of all federal taxes companies must pay for profits earned offshore, offers companies a one-time special low rate to repatriate the profits they have already earned, and lowers the rate on all domestic profits companies earn in the future from 35 percent to 20 percent at most.

In other words, the plan rewards huge tax dodgers with a massive tax cut. Not only do these ideas lack logic, public polling shows that they are hugely unpopular. The Wall Street Journal recently released a poll showing that most Americans believe corporations should actually pay higher taxes:

In spite of pervasive myths that the US taxes companies at higher rates than other countries, US companies pay about the average effective tax rate of other wealthy nations. This matters to the poor because corporate taxes are among the most progressive kinds of taxes the US can rely on to raise revenues. Cutting this rate will disproportionately benefit the wealthy and result in either higher taxes for the middle class or cuts to programs that help the poor, either of which would send inequality in the wrong direction.

We have already seen efforts to severely slash funding for life-saving global anti-poverty programs in the President’s FY 2017 budget. If this tax cut plan passes, those budget pressures would be amplified dramatically in the future. 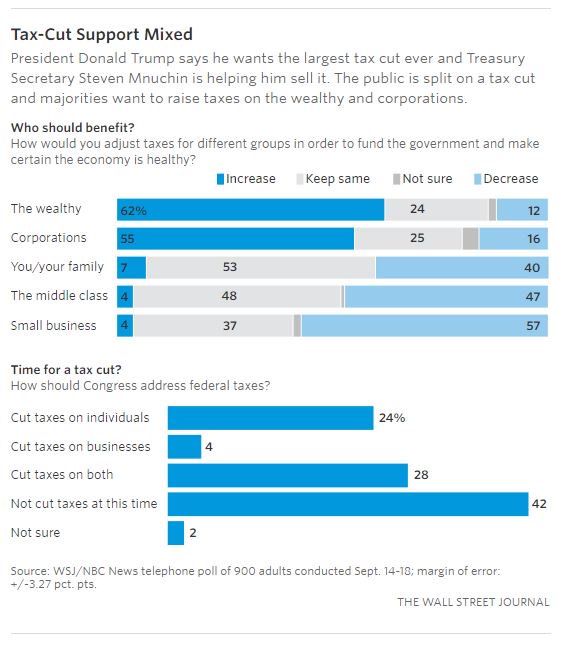 The proposal moves the US from a “worldwide” system of corporate taxation to a “territorial” system. In simple terms this means that American companies would no longer pay any US taxes for any profits earned abroad. This would create a greater incentive for US companies operating in poor countries to use tricks and schemes to shift their profits into tax havens. Many companies already do this, but rather than stemming tax haven abuse by American companies, the plan would accelerate it.

Additionally this shift would force poor countries to compete with each other to offer special tax incentives to US companies to attract their business. For countries already struggling to provide even the most basic education, healthcare and infrastructure, these incentives can be costly and will make it harder for countries to ensure the poor benefit from increased foreign investment.

Other rich countries are watching the US tax reform debates closely and planning their own countermeasures in response. The proponents of corporate tax cuts argue that they will make the US more “competitive” globally. But just as they did when the US cut tax rates in the 80s, other rich countries will lower their own taxes. Britain has already pledged to have the lowest rate among the G7 richest countries. France and Germany have signaled they would lower their rate, too.

Moreover rich countries are already struggling to compete with tax havens with tax rates as low as zero. There is simply no way to cut your way out of this problem. The solution must be to work collaboratively with other countries to prevent multinational companies from gaming the system. Measures to prevent companies from abusing offshore tax havens and to ensure that companies are paying taxes where their economic activity is truly occurring is the only long-term solution that can prevent a perpetual race to the bottom.

There are many reasons to oppose these tax-cut plans, but those are three of the core reasons that Oxfam – as a global anti-poverty organization – believes the proposal is so dangerous for poor people. We have joined with a large coalition of organizations and individuals committed to opposing this rigged reform agenda. We hope you will join us.