Peru must improve tax collection from the mining sector and ensure that mining revenues address the persistent poverty in mining communities.

Mining is one of Peru’s most important industries and is poised to continue growing in output. Unfortunately, recent expansions in mining production have not generated more tax revenue, and poverty reduction in mining areas seem to be stalling. The government of Peru should reassess the fiscal framework for the sector to improve its bottom line, bolster public services, and benefit local communities.

Peru’s reputation as a mining powerhouse, dating back to the pre-colonial period, was solidified during a commodity price boom from 2003 to 2012. As billions of dollars in investments poured in over the last decade, mineral production grew by over 60 percent. At the time, mining contributed more than any other sector to Peru’s treasury.

Reduced tax payments to the central government have also impacted Peru’s mining municipalities and regions. Fifty percent of the corporate income tax paid by mining companies is shared at the subnational level and distributed according to the canon minero. This mechanism ensures regional and local governments get their share of the revenues collected by the Peruvian state for the economic exploitation of natural resources. Between 2013 and 2017, $3.8 billion (12,415 billion soles) was transferred to subnational governments under the canon minero.

Yet, regions and districts where mining activities take place receive less revenue when companies pay less income tax, meaning there are less resources for these subnational governments to address their population’s needs. This is particularly troubling as Peru is seeing poverty rates increase, despite reductions during the boom years. Poverty rates are especially high in mining areas, such as Cajamarca, home to one of the largest gold projects in Latin America. Cajamarca has the highest poverty rate of any region in the country. 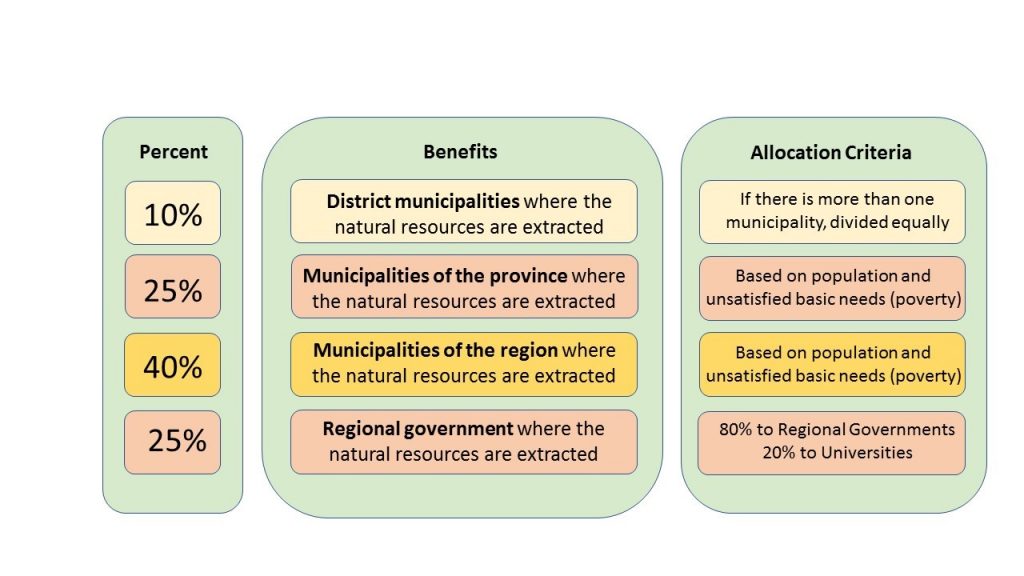 While falling mineral prices distressed budgets at both the national and subnational levels, mineral prices have somewhat recovered. As a result of higher prices and increased production, mineral exports from Peru exceeded $27 billion in 2017. Normally this would be cause for celebration: both companies and the state would benefit. 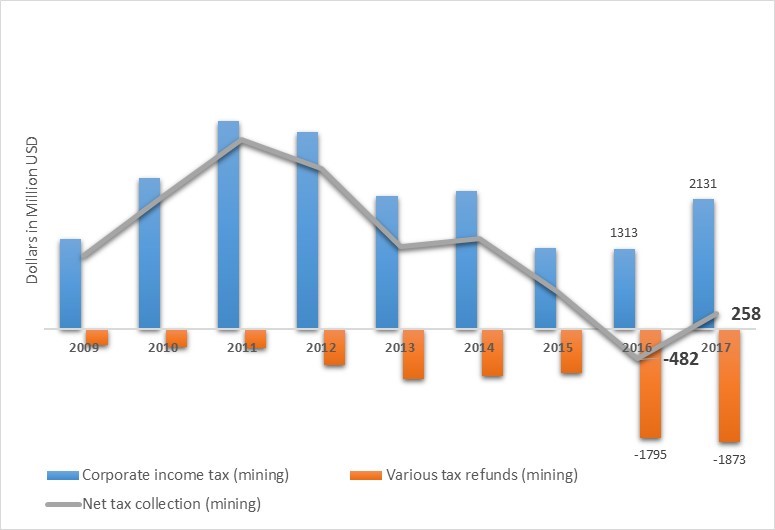 Mining companies have a right to claim these refunds, but we need reforms to limit their scope and avoid harm to subnational government budgets. Mining companies are allowed to deduct these refunds immediately from the income tax owed before making a payment to the central government. If the net result is zero or negative, companies do not make a payment at all. In practice, the central government has only transferred canon minero revenues based on the net payment made—not the corporate income tax calculated. This is jeopardizing regional and municipal government budgets that serve the communities where these companies operate. It is critical that Peru limit the discretion it grants companies to use this net payment (after tax refunds) method. This could be done by simply capping the amount of the refund that is immediately deductible.

Until recently, Peru didn’t have the capacity or political will to review and restructure the mining tax regime and revenue sharing. The government only seemed interested in making minor adjustments, most of which favored mining companies and investors.

Mining companies also benefit from an income tax deduction for investment in infrastructure projects for public use, which in many cases benefits companies more than the public. Until recently, loose regulation around transfer pricing has reduced the profit the Peruvian state can tax because companies are able to shift their profits abroad. Also, litigation of significant unpaid tax debts (an estimated $1.8b from the extractives sector) further reduces the fiscal benefits Peru sees from mining. These challenges have resulted in numerous cases of mining operations that do not pay taxes as they should.

Urgent reforms are needed to secure timely and sustainable fiscal contributions to Peru and its mining regions and districts. These reforms could include:

One promising sign is that Peru’s president has acknowledged the need to improve taxation without increasing the burden on the most vulnerable Peruvians, and has taken steps to address the unpaid taxes of large companies. Peru could require that the canon minero be based on corporate income tax as calculated before any tax refunds, even if the central government is left owing a refund to the company while transferring revenue to municipalities and regional governments. This would ensure greater stability for subnational governments relying heavily on the canon minero revenues.

Tax reform in Peru must be comprehensive and improve tax collection while seeking more efficient mechanisms for income to reach and benefit populations in mining areas.