Everyday we are forced to use numbers so large we cannot comprehend their meaning. Take for instance some latest headlines: powerball numbers drawn for $100 million prize; 360,000 households in the US face food insecurity; the number of Syrian refugees climbs to 3 million.

Despite all of our smarts, our hunter-gatherer ancestors set us up for this cognitive limitation. We can roughly visualize 100 things, but that’s right about where it ends. Mathematician Spencer Greenberg asserts that trying to imagine a million people is about as useless as trying to imagine a hundred million.

So what does it mean then when the ONE Campaign’s latest report tells us that one trillion dollars(!) is siphoned out of developing countries every year through money laundering, tax evasion and embezzlement. A trillion, twelve zeroes – but what really does it mean? They offer some graphics to help us picture it: 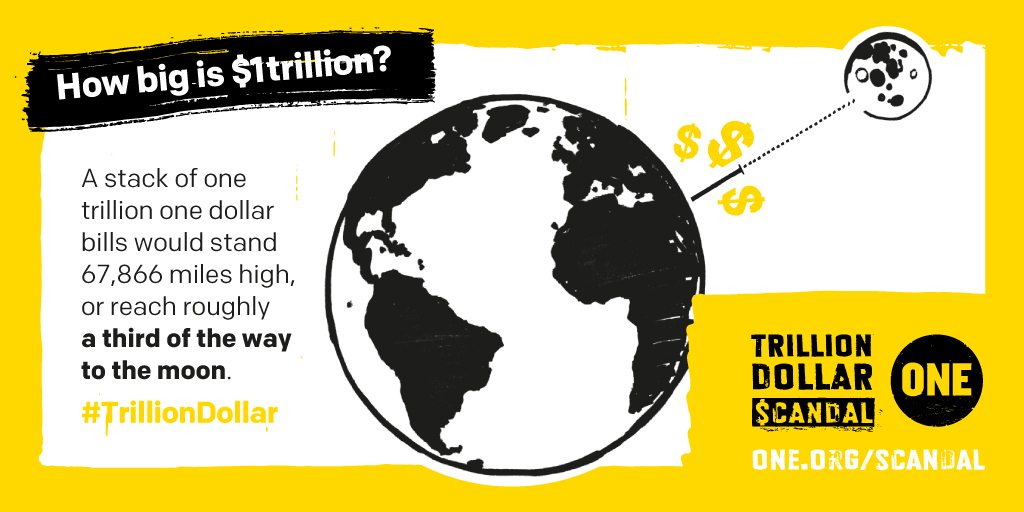 Illicit financial flows were also front and center at this week’s online discussion on corruption and governance (see #StateofRights on Twitter) with the State Department Bureau of Democracy, Human Rights and Labor, Transparency International, Global Financial Integrity, and the Stolen Asset Recovery Initiative of the World Bank, hosted at the OpenGov Hub here in DC. When talking about corruption and beneficial ownership, it’s easy to let the numbers whiz past our heads. They are abstractions.

But corruption is not that for people living in developing countries. When you have to pay a bribe to get your sick son the medicine he needs or when the road isn’t repaired because the allocated funds have “grown legs,” as we used to say in Zimbabwe, you know that you are facing corruption. It’s apparent every day:

#stateofrights corruption starts from classroom and must be eradicated.

At the #StateOfRights event, Heather Lowe of Global Financial Integrity discussed how corruption is a driver of poverty and illicit financial flows can be a measure of poverty. “When money leaves the global economy, poor people suffer,” she said. Shruti Shah of Transparency International, which has recently launched their #UnmaskTheCorrupt campaign to help end impunity, said that one feels corruption in a place by how it impacts other institutions and behaviors.

Oxfam conservatively estimates at least $18.5 trillion is burrowed away by wealthy individuals, depriving governments of more than $156 billion in tax revenue. The missing money is twice that required for every person in the world to be living above the $1.25-a-day “extreme poverty” threshold. One estimate shows that African countries lose over $63 billion a year from tax avoidance—double what they receive in aid.

That’s why currently at Oxfam, there’s research going on to learn more about the relationship between foreign assistance and corruption. Our initial findings are telling us that there may be ways we can reform how the US and other donors give aid to empower local actors to end corrupt practices and strengthen institutions. The researcher, Tariq Ahmad, is finding that anti-corruption successes are often not related to internationally-funded efforts at the national level, but that they emerge when governments work in partnership with citizen oversight bodies at the local level to try to improve service delivery such as in clinics or schools.

Obviously these localized initiatives are different from those needed to end harmful practices in the global financial industry, but the means of everyday citizens that are disproportionally affected by high- and low-level corrupt behavior to demand their rights can be strengthened by the international aid community.

We may not be able to recognize what a trillion means, but people everywhere can, and do, and can do more to address wrongdoing in our own backyards.