President Trump sent the internet into a twitter when he tweeted about “EASY D” a few weeks ago.  No one knew what he meant, but some people came up with some (ahem) ideas.

Big increase in traffic into our country from certain areas, while our people are far more vulnerable, as we wait for what should be EASY D!

This week we learned what he meant.

Trump wants to pump up the defense budget by a massive $54 billion according to news reports.  After all, he said, “There’s nobody bigger or better at the military than I am.”  Throwing a ton of taxpayer money at the military is, apparently, how it’s done.  “We have to start winning wars again,” he says. Easy D.

To be fiscally responsible, the President has promised to find “offsets,” i.e. budget cuts.  Among other cuts, he’s proposing to cut the State Department and USAID by 37 percent.  Those cuts, by any reckoning, would be devastating to their operations.  It would require wholesale program cuts, closure of US embassies, staff layoffs.

Former Secretary of State Hillary Clinton famously described American foreign policy as a three-legged stool: defense, diplomacy and development. The 3 Ds.  Trump likes one D, the easy D.  His budget would smash the other Ds. 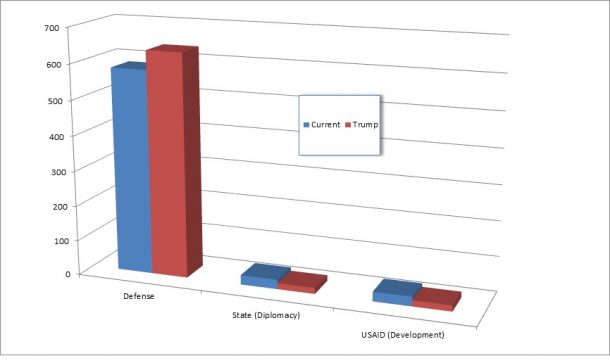 Secretary of State Rex Tillerson seems pretty lonely in Foggy Bottom since the White House fired the department’s senior staff and nixed his choice for a Deputy Secretary of State.  Trump hasn’t nominated anyone to head USAID, so the mourning will be done by the foreign and civil servants, who suffer in silence.  You would think the generals would be leaping for joy.  But, perhaps surprisingly, they’re not.  Instead, more than 120 of them (retired) wrote a strong letter decrying the cuts to diplomacy and development.  “We know from our service in uniform that many of the crises our nation faces do not have military solutions alone…”

In addition, Secretary of Defense Mattis is quoted with a similar sentiment: “If you don’t fully fund the State Department, then I need to buy more ammunition.”

The EASY D isn’t always the best D.  It certainly shouldn’t be the only D.  Diplomacy and development complement military approaches, and can prevent the causes and effects of violence.  And, usually, they’re much cheaper.

The reaction in Congress, even among the President’s own party, has been negative.

Foreign Aid is not charity. We must make sure it is well spent, but it is less than 1% of budget & critical to our national security.

So.  President Trump wants more of the EASY D, defense.  But the country needs the others.