For over a decade, Oxfam America supported Salvadoran civil society organizations by monitoring mining-related activities and has worked to raise awareness of the OceanaGold case with members of the US Congress, who have expressed concerns about mining’s potential impacts in the country. Last week, the country made a historic decision.

Ivan Morales is the Oxfam Country Director in El Salvador.

El Salvador made history last week becoming the first country in the world to prohibit open-pit, underground, and artisanal metal mining. The message of the decision was clear: A declaration that water and the environment have much more than commercial value. The legislation will protect the country’s water resources and greater environment for all inhabitants and for future generations. The saying “water won out over gold,” repeated by legislators from all parties, will go down as the iconic quote of the day.

It was a hard won struggle, fought over 10 years by the local communities, social movement organizations, churches, international allies, the academic sector, and the media, who raised their voices against metals mining in the country.  Many gave their lives, including Marcelo Rivera, Dora Sorto (pregnant at the time of her murder), Ramiro Rivera, and Juan Duran (all pictured below).  Oxfam accompanied this struggle throughout the decade, supporting the communities and arguing that mining was not a sustainable option for reducing the high levels of poverty and inequality endemic to the country.  The average metallic mine uses 24,000 gallons of water per hour, or about what a typical Salvadoran family consumes in 20 years, and already 90 percent of the surface water is contaminated.  And as we all know, without water, life is not sustainable. 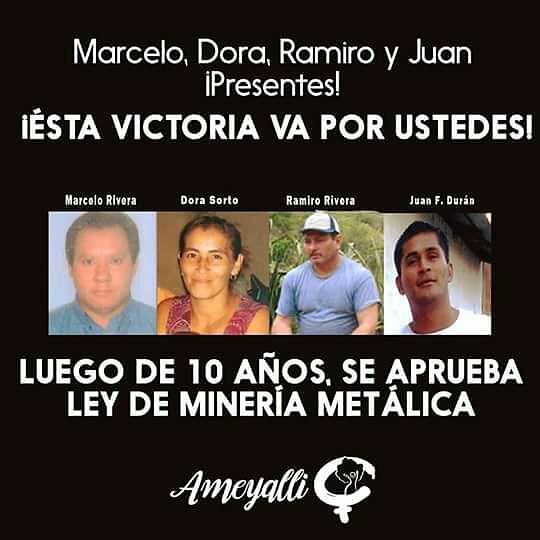 Our work collectively demonstrates that active citizens engaged at local, national, and global levels are capable of changing power relations and influencing decision-makers to establish legal frameworks centered on the human rights of the majority.

Up next is an opportunity for the timely passage of the General Water Law, which will provide a framework for the use and conservation of the country’s water, which is currently disorganized and decentralized. This legislation has been dormant in the legislature for the past 12 years due to staunch opposition from a few sectors. This changed on March 29 with the passage of the new anti-mining law and the public commitments expressed by the legislators to defend water as our most precious public resource.

Minister of the Environment and Natural Resources Lina Pohl agrees that the system for managing the extraction of water from the country’s aquifers is quite disorganized and spread across multiple government bodies with many national businesses which don’t see why they should comply with rules. Yet for years the country’s lawmakers have been unable to pass a proposed General Water Law which would provide a framework for conserving this precious resource needed for all in El Salvador.

In El Salvador, water is the most important public good and ensuring its quality and that all people have access to it is a strategic precondition for reducing inequality and poverty, and promoting economic development.  Oxfam has accompanied this struggle and we are thrilled about this victory. We are also committed to continuing to ensure the human right to water and food enshrined in the Salvadoran Constitution is upheld by approving the proposed reforms and passing the water law.

The new law to prohibit metal mining is also an important step toward slowing the advance of an economic model based on the extraction of natural resources that only concentrates wealth and generates inequality and social conflict. We hope that these decisions set in motion an irreversible march toward sustainable and just development for all people in El Salvador and the world. Onward!